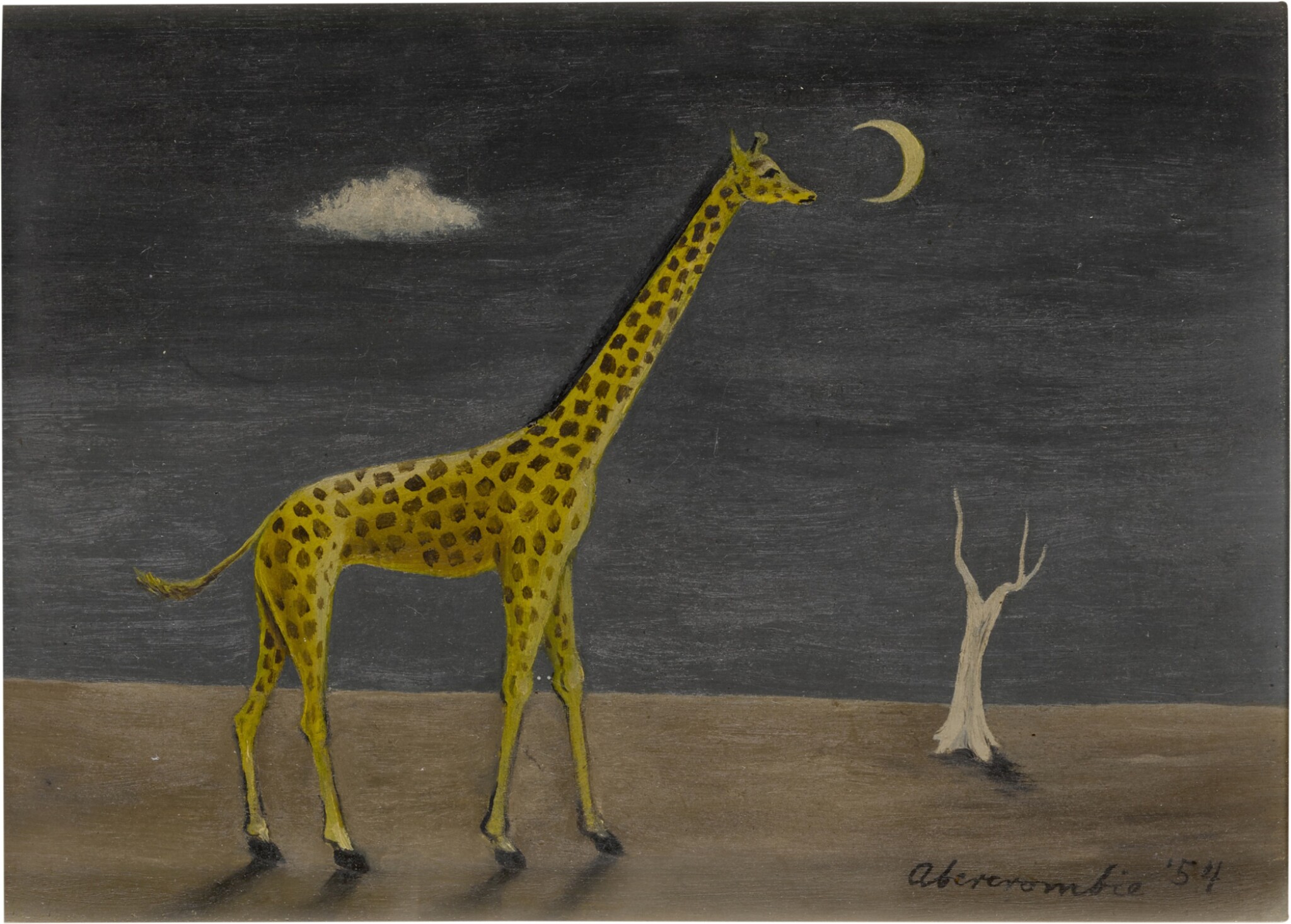 We are grateful for the research conducted by Susan Weininger, Professor Emerita, Roosevelt University.

There is frame abrasion with some associated losses along the extreme edges and the Masonite appears to have been cut unevenly by the artist. Under UV: There is no apparent inpainting.

Benjamin Krohn, by 1954
Private collection, Chicago, Illinois, circa 1970s
By descent to the present owner

We are grateful to Susan Weininger for preparing the following essay: This image, one of many paintings of giraffes done by Abercrombie, is a deceptively simple composition consisting of a giraffe in a desolate landscape with a single lifeless tree. One cloud and a slim crescent moon are in the sky.  All of these are typical elements of Abercrombie’s work, here arranged to emphasize the almost symbiotic relationship between the animal and the moon.

Abercrombie did many paintings of giraffes, the earliest dating to ca. 1938, close to the beginning of Abercrombie’s career; the latest dates to 1958, about a decade before her latest paintings. In between she did at least 16 paintings in which a giraffe, or on one occasion, two giraffes, are the major subject (Two Giraffes [Giraffe Lovers], 1951, Private Collection). Sometimes a giraffe appears in the background of a scene, such as the one in Search for Rest (1951, Dijkstra Collection), which resembles the one in the painting being considered here. The largest of these is 6” x 8” and several are the very tiny images (1½” x 2” or smaller) that Abercrombie created to be made into brooches. Although some of these cannot be located today, the popularity of this subject is attested to by the fact that almost all of them were sold at various venues, including Associated American Artists in Chicago, Katharine Kuh Gallery, the Renaissance Society of the University of Chicago and the South Side (Hyde Park) Art Fair where Abercrombie was a very popular fixture each summer and made many sales.

This particular Giraffe was sold to Benjamin Krohn, a Chicago dentist who was also an accomplished artist. By 1954, he had a well-established gallery where he sold the work of both international and local artists (he had turned his attention to the local art scene during World War II). Abercrombie’s work was shown regularly at the gallery. It is not clear whether he bought this to sell or for his personal collection, but it seems to have remained in the Chicago area for some time.

Why giraffes? Abercrombie famously said “It is always myself that I paint” and, as I have argued elsewhere, even in her still life paintings and empty rooms she is present. The repertoire of personal objects that recur in her paintings come to stand in for the artist herself. As I thought about the giraffe imagery it occurred to me that the tall, long-necked Abercrombie may have found in this animal another stand in for herself. She adopted the owl and the cat, familiars of the witch, for compositions in which she wanted to emphasize those roles; she might have chosen to identify with the giraffe, a less familiar creature but something of a unique outlier as she was herself. There are numerous Self Portraits in which her neck is elongated (for example, Self Portrait in White Beret, 1935, private collection; Self Portrait of My Sister, 1941, Art Institute of Chicago; Self and Cat [Possums], 1953, Maurer Collection). And in the many images of Abercrombie in a room or a landscape, her neck also appears unnaturally long (for example, A Game of Kings, 1947, location unknown; Strange Shadows [Shadows and Substance], 1950, private collection; Search for Rest, 1951, Dijkstra Collection; Gertrude and Christine, 1951, location unknown).

In this painting, the moon, which she considered her personal property, is accessible to the long-necked giraffe who is able to reach it by virtue of its height, something Abercrombie would have loved to have done herself. This image of the giraffe reaching the moon attests to her ownership in a simple, yet resonant way, typical of Abercrombie’s transformation of recognizable things of this world into evocative and meaningful art.