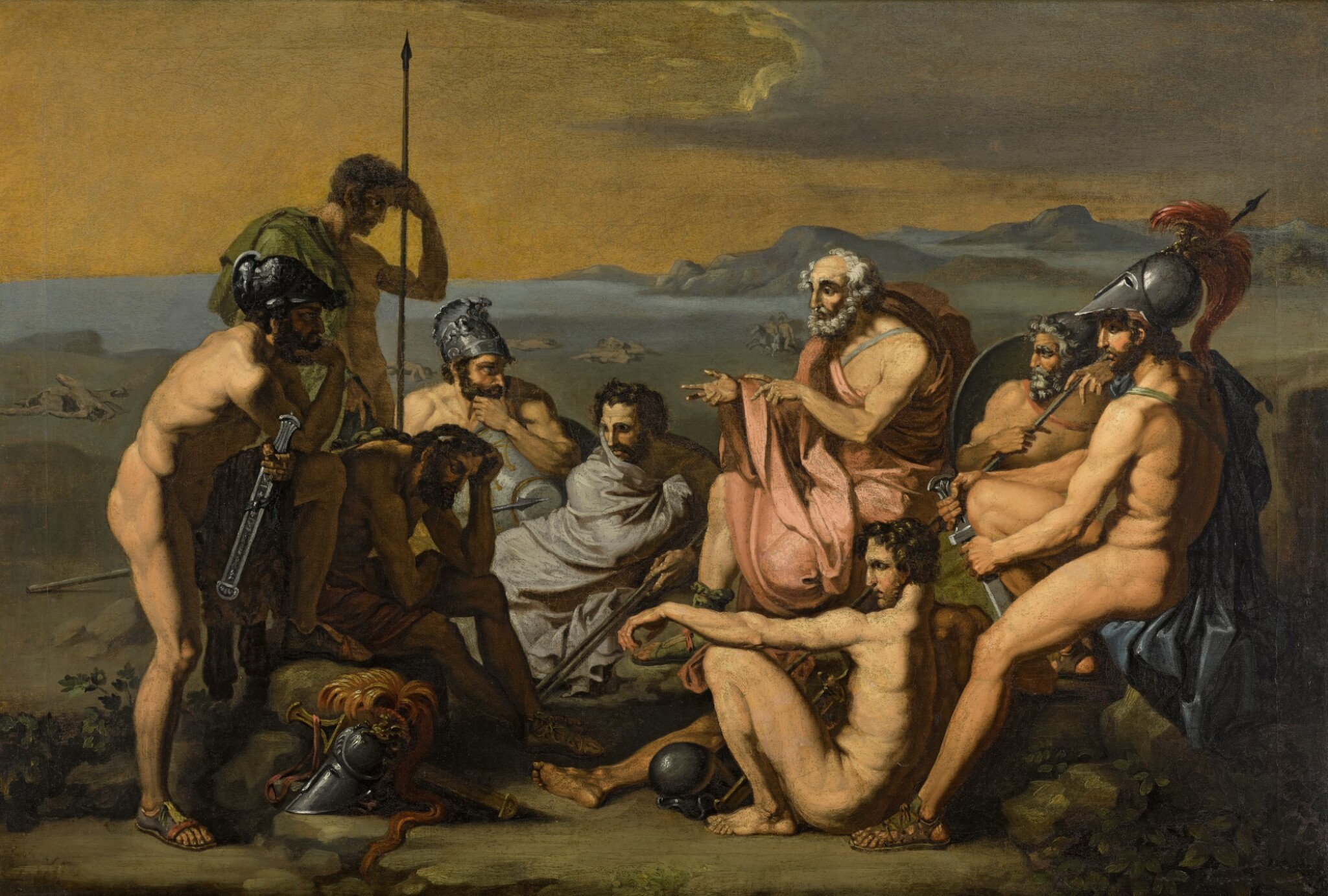 The canvas has a firm lining, and the paint surface is relatively dirty with a discoloured varnish. Stretcher marks along all four margins are visible under raking light. Small, fine lines of discoloured retouching are visible throughout the background, as well as some spots in the male figure sitting on the ground lower centre. Inspection under ultraviolet light confirms these, and also reveals a more concentrated section of retouching in the sky around the man holding a spear upper left, as well as further revealing scattered, cosmetic retouching in the landscape. Retouching in the figures is confined to small, fine lines in all the figures' hair, some pin-prick spots very sparsely scattered in their bodies, and retouching in the top of the drapery of the white-haired man upper centre. In overall fair condition.

This small oil painting may be a preparatory study for Johann Martin Wagner's large-scale painting of 1807 (296 x 441 cm.), today in the Martin von Wagner Museum at the University of Würzburg.1 The subject is taken from Book X of the Iliad, and depicts the Greek soldiers waiting for Ulysses and Diomedes to come back from a nocturnal raid in the Trojan camp. Nestor, who suggested the raid, is the old man at the centre of the composition, while the two Greek kings Agamemnon and Menelaus, on the left side of the painting, are leaning towards him. In as early as 1804, Wagner had already sent a description of the painting in a letter to Goethe,2 whose influence was highly important and strongly felt throughout Wagner's career.

The composition necessitated a long and elaborate preparation, and various preparatory drawings and single figure studies in the Martin von Wagner museum illustrate the complex genesis of the painting.3 The composition of the present work is very faithful to the final version, while another oil study of 1806, in the Hessisches Landesmuseum, Darmstadt (57 x 47 cm),4 differs in the addition of a warrior leaning towards Nestor, as well as minor details in the poses of the other soldiers.

The choice of depicting a council and a moment of calm opposed to a battle scene was not uncommon for Wagner, as it provided him with the opportunity to focus his efforts on static figures in a classic and elevated style. This style was heavily influenced by Heinrich Friedrich Füger (director of the Vienna Academy at the time Wagner attended), and his close friend Eberhard Wächter.5

We are grateful to Maria Schabel M.A., from the Martin von Wagner Museum in Würzburg, for suggesting that the present work could be a study by the hand of Wagner.