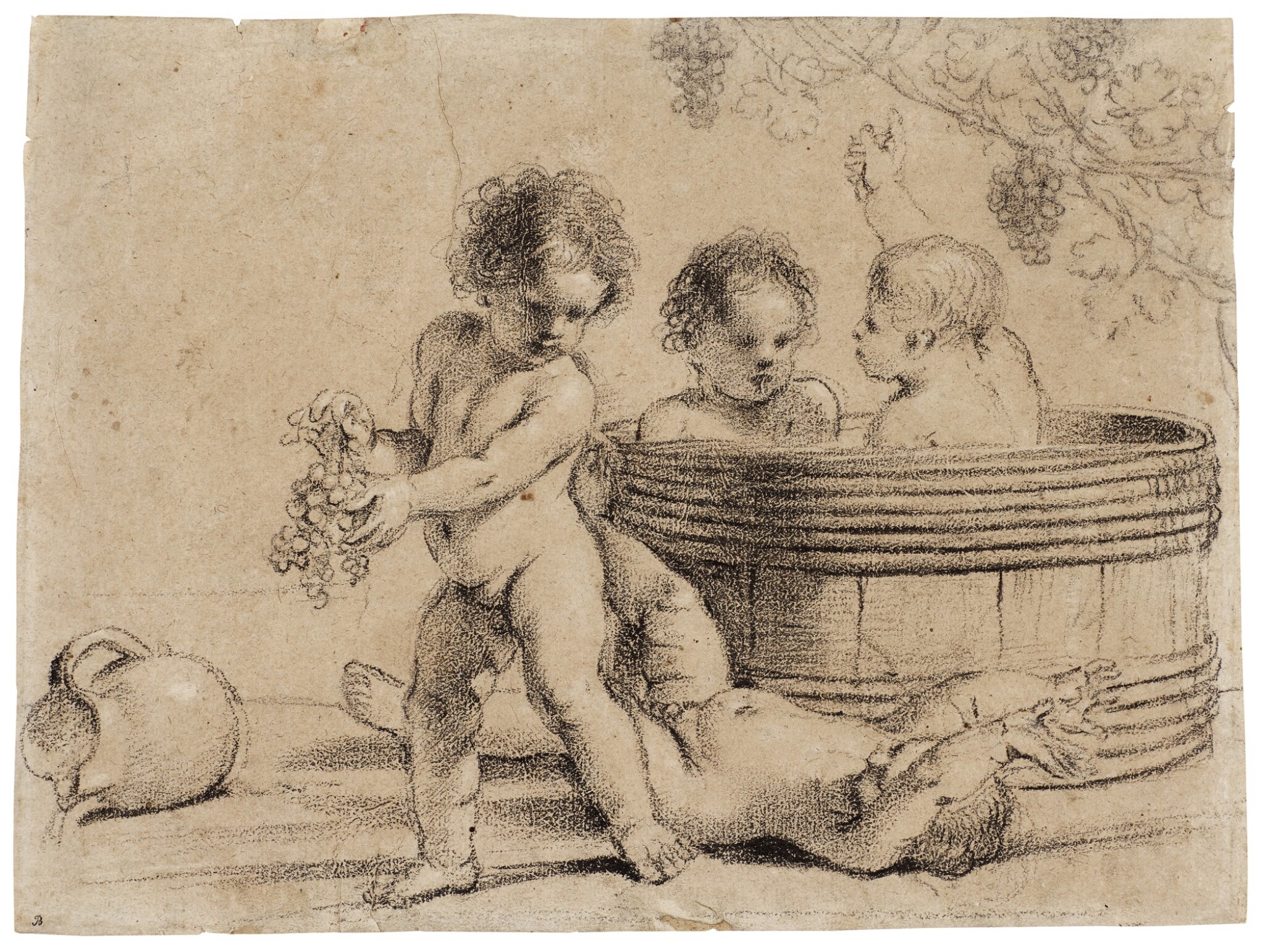 by inheritance to his sister Anne Bouverie and his brother-in-law John Hervey,

by descent to his son Christopher Hervey, at his death in 1786,

by inheritance to his aunt Elizabeth Bouverie;

Sir Gerard Noel, father of the first Earl of Gainsborough,

by descent to Charles Noel, 3rd Earl of Gainsborough,

Detached from a backing, there traces of glue visible on the verso and some thinning of the paper in a few areas.

The paper has slightly discoloured and there are small nicks and losses at the bottom margin. A few nicks also at the top section of the right and left edges. A few small stains towards the left margin, barely visible. The media is strong.

At least three other Guercino drawings are known that depict variations on the delightful theme of putti making wine. This previously unknown, boldly drawn study, formerly in the distinguished collection of John Bouverie, seems, however, to be the only one executed in oiled charcoal, a medium most frequently used by the artist in his early career, for academic drawings of posed male figures.

So far, these bacchic compositions have not been linked with any known work or project by the artist, but they must all date from the first half of the 1620s. The composition can be closely compared with that of a drawing now at Chatsworth, though the latter is executed in the unusual combination of red and black chalk with stumping.1  Another study in red chalk, with the same subject but differing in compositional layout, is in the Galleria Estense, Modena, and another sketchy study in pen and brown ink is in the Victoria and Albert Museum, London.2 A further study in red chalk of a single putto making wine, considered by the late Sir Denis Mahon to be a late work by the artist, was in the Bick Collection until it was sold in these Rooms in 1984.3

Guercino was summoned by Pope Gregory XV (Ludovisi) to Rome in 1621 to paint the ceiling decoration for the Loggia delle Benedizioni in the Vatican Palace, a work that he never actually started. He did, however, stay in Rome until the Pope’s death in 1623, working in particular for the 'cardinal nepote' Ludovico Ludovisi (1595-1632).

Although there are generally no specific references to the Antique in Guercino’s work, it is tempting to think that such a subject could have been inspired by a Roman relief and transformed by the artist into these entertaining and poetic scenes, with their implied references to the seasons.