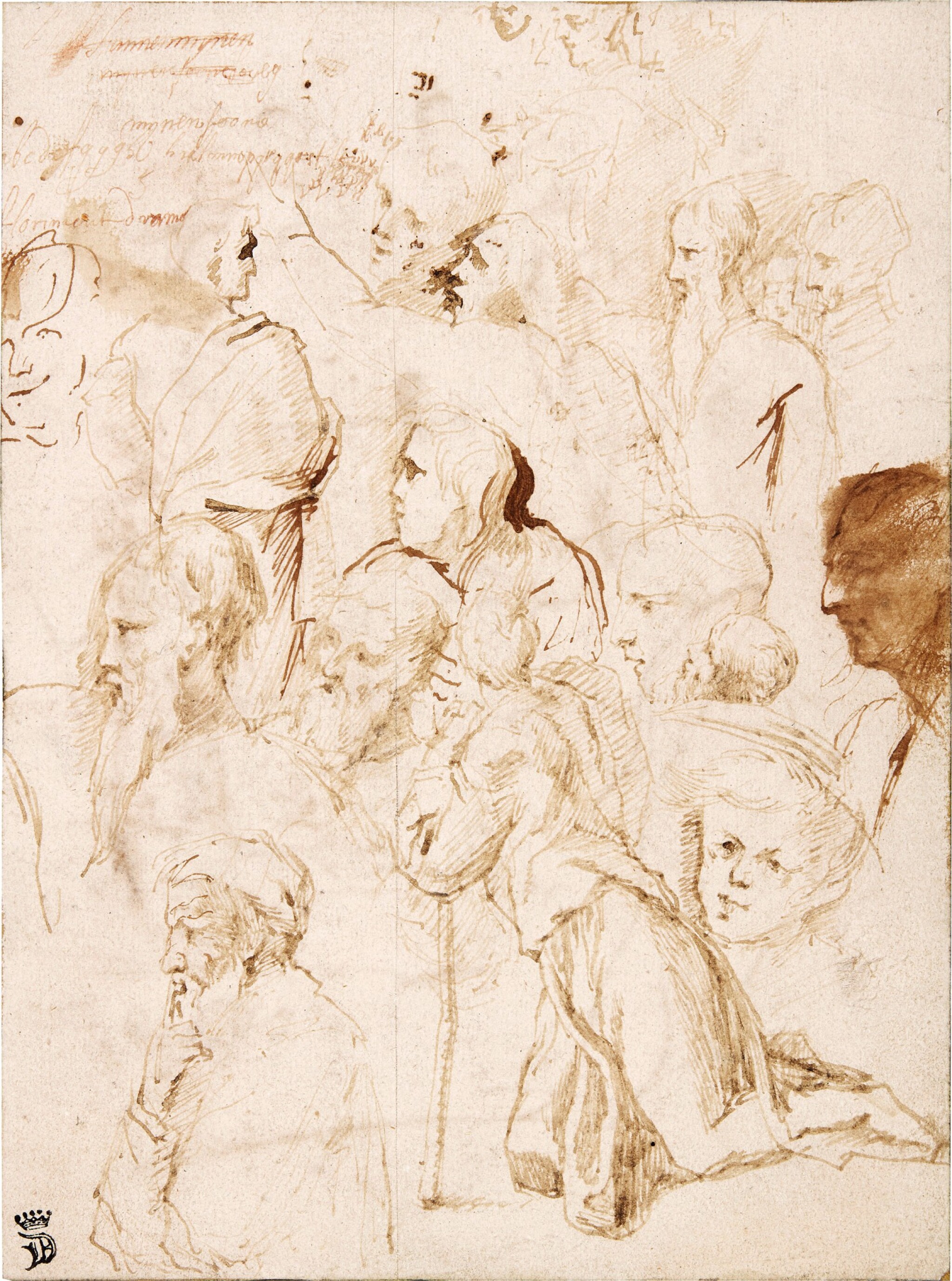 Pen and brown ink and wash;

Laid down on the remains of an 18th-century mount (the gilded border still surrounding the sheet). Fine vertical line, possibly a surface cut, just to left of centre. Ink somewhat faded in parts, and a little light foxing and surface dirt. Further studies on the verso showing through in places. Overall condition none the less reasonably good.

This previously undescribed sheet, totally filled with energetic and varied studies of heads and full figures of men of various ages, can with some certainty be added to the relatively small group of pen and ink figure drawings by Jan Lievens, the great majority of whose known drawings are of other types. Defining the boundaries and chronology of this section of Lievens’ drawn oeuvre is one of the greatest challenges to be faced when studying the artist’s drawings, as only some five such sheets are either signed or directly connected with other works, and those five span more than four decades, from the very beginning to the very end of Lievens’s life.

The present work is closest in handling to a signed sheet in Düsseldorf1, with which it shares its very fluid and calligraphic penwork, pointed facial features and very strong, dark accents in the shadows. That drawing is generally believed to date from the period (1635-1644) when Lievens was living and working in Antwerp. At that time, the influence of Van Dyck was particularly evident in his drawing style. Other drawings by Lievens that are handled in a rather similar way are the Half-Length Study of a Woman in Profile, in the Abrams Collection at Harvard University2, and the River Gods, recently sold from the Van Regteren Altena Collection.3 Also comparable, and showing more of the intensely hatched shading that is so apparent in the present work, is a Study of an Old Man in Profile, in a private collection.4

The shading in this newly discovered drawing is certainly more intense than in many of Lievens’s other figural drawings, as is the way in which the artist has packed so many heads and other figure studies almost on top of each other within the sheet, but one quality that unifies Lievens’s drawings, particularly these pen studies, is that they show so many subtle differences of handling, one from another, while still maintaining stylistic consistency as a group. Lievens never stopped experimenting as a draughtsman, something that makes his drawings endlessly fascinating, but also challenging to classify.

As is evident from the bold collector’s mark in the lower left corner, this drawing originates from the collection of the Earl of Dalhousie, though precisely which Earl was responsible for assembling the drawings collection remains unclear. According to Julia Lloyd-Williams, it was most probably George Ramsay, 8th Earl of Dalhousie (circa 1730/39-1787). The mark was, however, probably only applied to the drawings when they were sold from the collection at the beginning of the 20th century. All the known drawings bearing this mark originate from two extensive albums, which were acquired by the London dealers P & D Colnaghi & Co in 1922. The first albums, which seems to have contained exclusively drawings by artists from the Rembrandt school, and in particular Nicolaes Maes, was dispersed not long afterwards. The second album, containing drawings by Italian artists, was acquired by Frits Lugt, who kept a few of his favourite sheets (and also the binding), but sold on most of the drawings. William W. Robinson, who has studied the Dalhousie albums in depth in connection with his work on Maes, has kindly informed us that he believes the present drawing must come from this second album, and may well have been thought to be by an Italian hand.