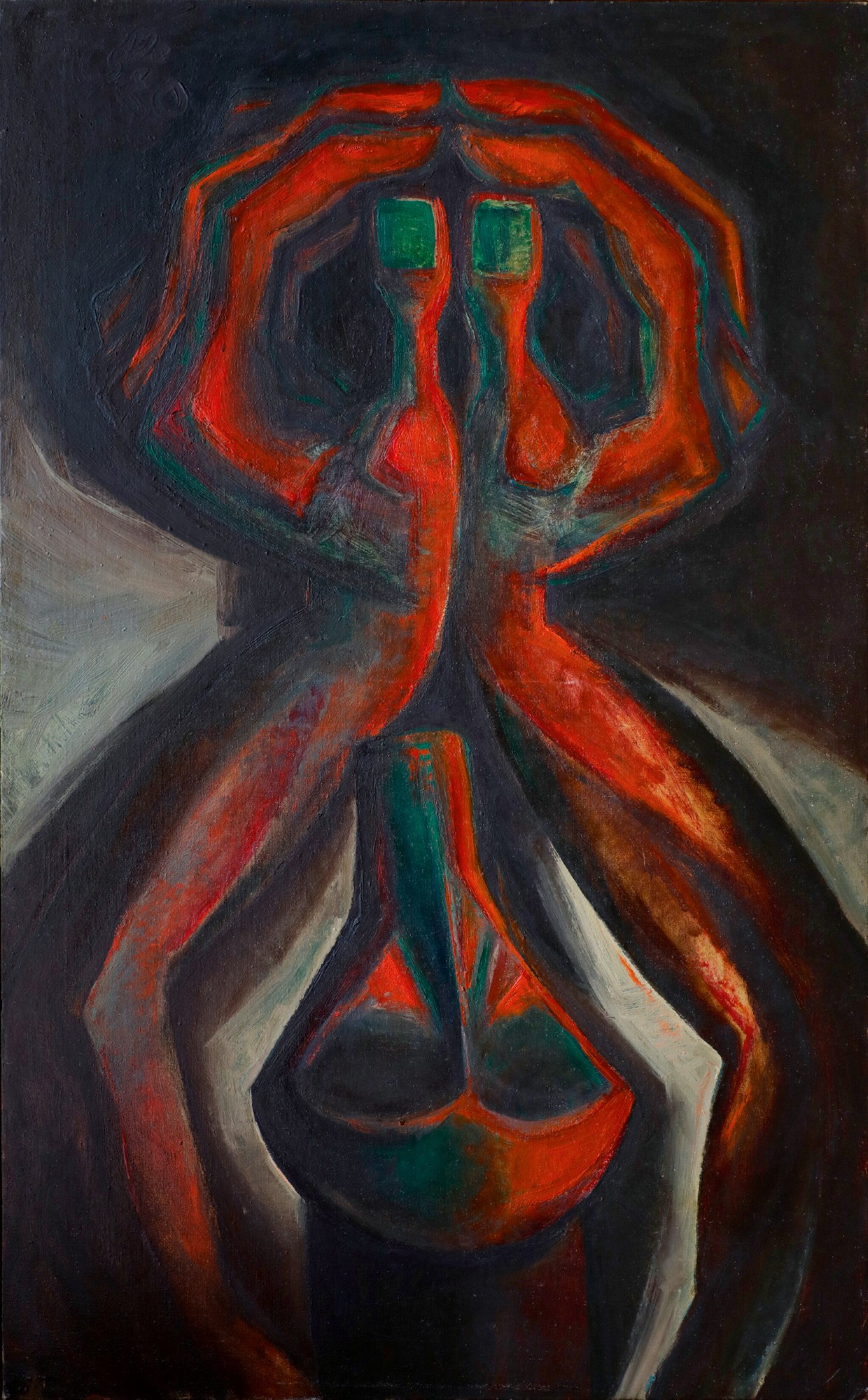 Condition: This work is in very good condition. There is extremely minor wear to the four corners and a very small spot of paint loss on the centre outer edge. There is also a small, barely visible surface imperfection on the lower left corner inherent to the artist's working process and original frame. There is no restoration apparent when viewed under the UV light.

Please note that there may be restrictions on importing certain types of property of Persian/Iranian origin into the Untired States. Clients should enquire with the U.S Office of Foreign Assets Control (OFAC) regarding the proper importation of items subject to such restrictions.
Collection of the artist, Tehran
Thence by descend
Tehran, Talar e Gandriz Gallery, Farshid Maleki, 1968

Belonging to that rare breed of regional artists who use a universal and unfettered visual language, Farshid Maleki, born in 1943 nevertheless hailed from the generation of Iranian modern masters for whom identity and nationalism were of great significance. Describing his own childhood in Tehran, Maleki speaks of an upbringing which encouraged introspection – shuttling between divorced parents he learned to internalise conflict and emotions, instead releasing expressions through copying images of celebrity faces from Tehran Illustrated (Tehran Mossavar) and other magazines that he found in his mother’s home. The praise he received for his deft copies led him to take up drawing more seriously. He attended the Dar ol-Fonun, followed by the Tehran School of Decorative Arts where he met and befriended the likes of Manouchehr Safarzadeh, Mehdi Sahabi, Mohammad-Reza Aslani, Iraj Anvari and Simin Nategh. Mansour Ghandriz was one year ahead of him at university and eventually became a strong influence on Maleki. “I watched him from the side-lines and went to his exhibitions,” Maleki says in an autobiographical note. By 1966, the artist who had met Ruin Pakbaz and Ali Golestaneh at Garduneh advertising agency, began a collaboration to introduce his peers from the School of Decorative Arts to Pakbaz, and to become more engaged with the well-known radical art space, the Iranian Hall – later named after Mansour Ghandriz. This space showed a variety of artists, including Ghandriz and Bahman Mohasses. In 1968, Maleki received his BA and that same year exhibited his first paintings at the gallery. He then attended the University of Reading in the UK to obtain an MA in painting. Between 1971 and 1973 he produced his Totem Series which were subsequently shown at the Ghandriz Hall. The public reaction to this series was initially not favourable, and it was only Hannibal Alkhas’s Kayhan article relating the works to African and Oceanic totems that gave some context to the direction the artist had taken – namely, an homage to Mansour Ghandriz and the tension between the idea of the word and image.

However, as Maleki himself has been at pains to point out, he is not an artist whose central preoccupation revolves around national or religious concerns. “I don’t know what my works are talking about,” he says, “but I can point out that I am not one of those painters who believes in a national identity. For a long time now, and for many reasons, I have dropped these sorts of tendencies. Increasingly I like the representative, and the work of figurative Western painters – though I disagree with dividing the world’s culture into East and West.” (Tehran, 2011).

Living and working in Iran today, Farshid Maleki is one of Iran’s most respected art critics and university professors. He has exhibited widely in his life-time – at Thomas Erben Gallery in NY, Gallery Isabelle van den Eynde in Dubai, and at a number of Tehran galleries. His work is held in the permanent collection of the Tehran Museum of Contemporary Art and he is considered a master painter of his time, as well as a valued mentor to a generation of younger artists. With over 30 years of professional practice and an illustrious career teaching both in Tehran and Isfahan, Maleki can be considered one of the major influences of the Iranian art scene of his time. His most recent expressive works are inspired by the characters and situations of daily life, though in his own unique contexts and sometimes distorted tableaux. Describing his fluid, intense practice, and his most recent series of strange human figures in a pseudo-abstract setting, Maleki draws parallels with one’s ever-shifting circle of friends, family and acquaintances that flit through the social channels. “People come and go,” he says, “Now they’re here, now they’re not. In general I depict the chaos in my own mind.” He uses a mixture of magic markers, ink, gouache, acrylic and coloured pencils to create tangled settings and fantasmagorical compositions.

Sotheby’s is proud to offer a singular work from Maleki’s expressive series. With strong lines guiding the eye to absorb the shape of a Picasso-esque supplicant figure, this work’s dark setting and impactful perspective draws the viewer to imagine a universe in which a stylised human head is raised towards the heavens and the hands are cupped in a gesture of prayer and hope. An attractive and sophisticated palette of hues reminds us that Maleki is not only a master of the expressive and gestural, but also an alchemist of colours.