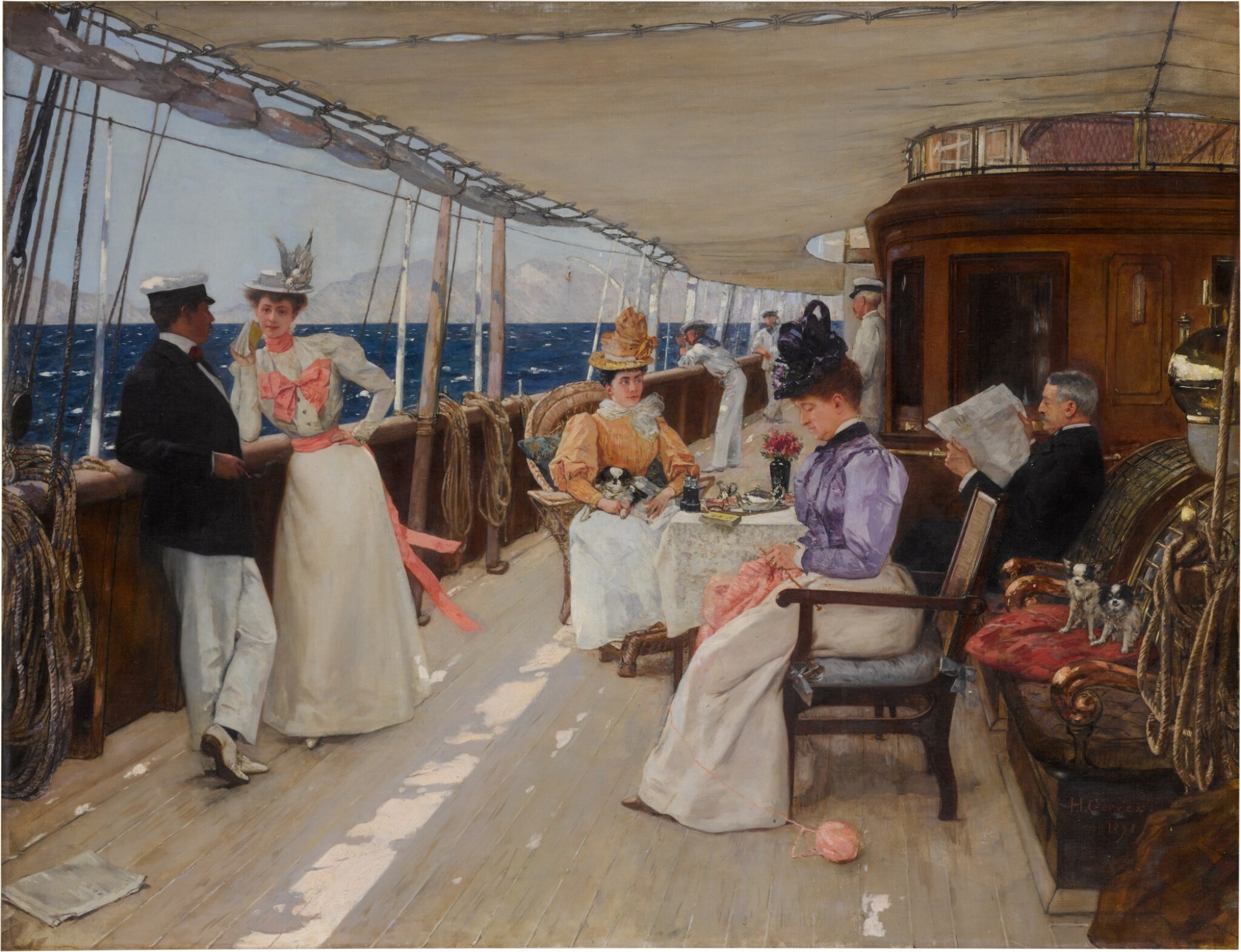 The following condition report was kindly provided by Simon Parkes Art Conservation, Inc.: This work is in excellent condition overall. The canvas is still stretched on its original stretcher. The painting seems to be clean and lightly varnished. The varnish has become slightly soft. The only retouches visible under ultraviolet light are in the sky between the masts to the right of the standing woman on the left side. There are a few non-original brown spots on the surface in the dress of the woman knitting, in the canopy above the hat, and in a few other isolated areas, which could easily be removed.

Henri Gervex painted Yachting in the Archipelago in 1898, while a guest on board the magnificent yacht, Namouna, belonging to Gordon Bennett, the owner of the New York Herald and an international media entrepreneur. Bennett, who is probably depicted as the gentleman in white suit, leaning against the cabin in the posture of Captain of his vessel, moved frequently between New York and Paris. He occasionally commissioned Gervex to provide illustrations for the Herald and often included the artist among the fashionable European and American guests on the most current of his several renowned yachts. For Gervex, an artist entirely committed to painting the very real events and most fashionable details of his day, Yachting in the Archipelago represents a fascinating intersection between his personal and professional lives.

Gervex was born in Paris in 1852 and trained for five years in the Ecole des Beaux-Arts studio of the influential Academic master Alexandre Cabanel. His skill as a draughtsman as well as a sensitive colorist helped Gervex to forge important friendships with both the best academic artists of his generation and several of the most innovative artists building careers (and the new movement of Impressionism) outside of the established Academic strictures. Gervex began his own career with several well-received Salon entries featuring traditional subject matter such as satyrs and vaguely mythologic bathers; but by 1876, he began to claim a new, more contemporary footing with Autopsie a l'Hotel Dieu (now lost). In 1878 Gervex firmly moved into enfant terrible territory with his brilliant and beautifully realized depiction of a troubled young man-of-the-town turning away from a magnificent nude prostitute still asleep on the bed beside him. That painting, Rolla (Paris, Musee d'Orsay), although accepted at the Salon on the basis of the young artist's already-medalled stature was precipitously withdrawn on the accusation of 'immorality', only to become the art season's most popular success when displayed in a nearby art dealer's establishment for three months! Henceforth, Gervex embarked on a consistently impressive path that balanced important state and municipal decorative commissions presenting highly realistic scenes and public events of modern French daily life, executed on a suitably grand scale, with a countering pattern of smaller, more intimately drawn, highly detailed, paintings of Paris social and family life destined for an increasingly international market of private collectors.

In Yachting in the Archipelago, Gervex carefully spreads his vaunted attention to detail between the colorfully and individually characterized guests aboard the yacht, with their lapdogs, yellow-covered novels, and meandering balls of pink yarn; and the fittings of the luxurious ship itself. Bennett's yachts were famous in their own right, both for the numerous races he won and sponsored, and for the cares taken in assuring passenger comfort, such as the canvas panels, rolled now to the edge of the overhead tarpaulin, that could be easily dropped as sun- or wind-screens. Although the identities of Mr. Bennett's guests are not known, except for Mme. Gervex, the artist’s wife, leaning against the railing in deep conversation with a guest, the distinctiveness of the figures' individuality suggests they may well be portraits of the artist's actual companions on his 1898 voyage with the publisher.

We are grateful to Alexandra Murphy for providing this catalogue note and additional information.