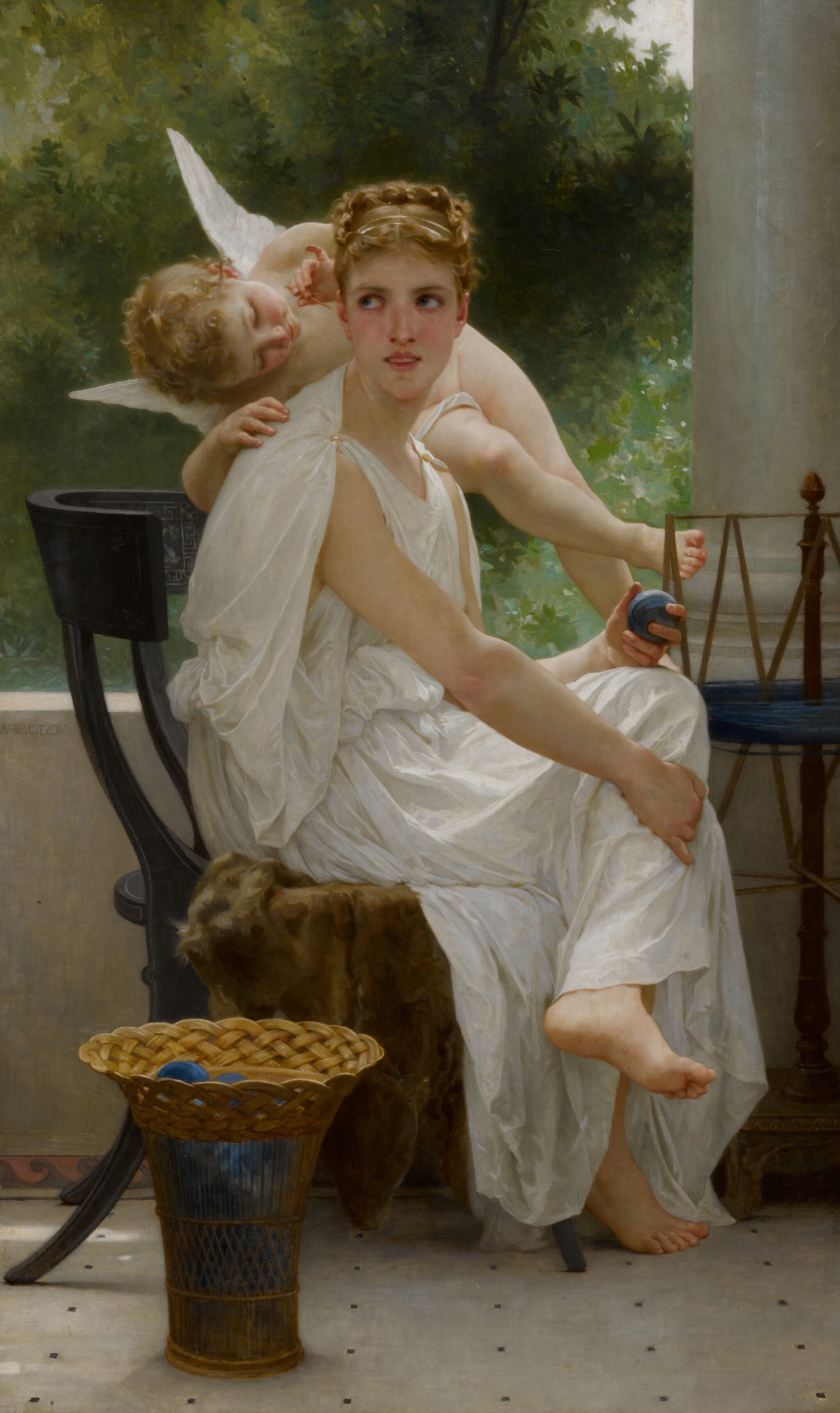 This condition report has been provided by Simon Parkes Art Conservation, Inc. This work is in beautiful condition. The canvas has an old glue lining. The cracking is very slightly raised in the upper left, but the paint layer is stable. The painting is clean and varnished. Under ultraviolet light, retouches can be seen on the bridge of the woman's nose and in one spot in the eye on the left. A few cracks in the base of the spindle have been retouched. The work should be hung in its current state.

Bouguereau’s essentially optimistic poeticism is evident in Le travail interrompu, where the theme of anticipation or occurrence of young love is apparent. A young woman in an ancient Greek setting, dressed in a white linen peplos, is suddenly interrupted in her yarn winding by the arrival of an unseen figure. She gazes over her shoulder towards the source of the disturbance while a playful cupid whispers in her ear while teasing it with a golden dart. The authenticity of the classicism of the scene is further heightened by the inclusion of a klismos chair and a mosaic floor.

The charming subject, possibly inspired by older renderings of Cupid and Psyche, such as Fragonard’s Sappho Inspired by Cupid, belonged to a genre that was immensely popular with the French and American public at the end of the 19th century. Bouguereau’s delicate technique and photographic-like realism, allowed him to elevate the otherwise ubiquitous subject matter to new heights of idealism.

Painted in 1891, Le travail interrompu is a réduction of a larger work presently in the collection of the Mead Art Museum at Amherst College, Massachusetts. Bouguereau began work on the larger version in 1890 and immediately sold it on option to his agent Arthur Tooth & Sons, presumably because a long waiting list of clients awaited its turn to a masterpiece by the celebrated artist. Concomitantly, Bouguereau began work on the réduction, which he again sold on option to Arthur Tooth & Sons. Both paintings were received by the dealer in 1892 and immediately placed in prominent American collection. The réduction was probably purchased by renowned industrialist William Kissam Vanderbilt I and possibly sold again after his divorce from his wife Alva Erskine Smith in 1895 and subsequent move to France. His father, William H. Vanderbilt, had died in 1885 and could not have been the purchaser, as entered in records at the time.

Beginning in 1859, Bouguereau had begun to paint réductions of major paintings to facilitate the production of engravings. Because the original paintings upon which these engravings were based tended to be quite large, réductions, typically one half or one third of the original’s size, were less cumbersome for engravers such as Victor Thirion. Despite the reduced size, these works were faithful copies of the original compositions. While réductions were occasionally painted in collaboration with his studio, the artist’s hand is evident in the masterful treatment of faces, hands, and drapery. An engraving by Alfred Joseph Annedouche was issued in 1894 with the title Cupid's Whispers.