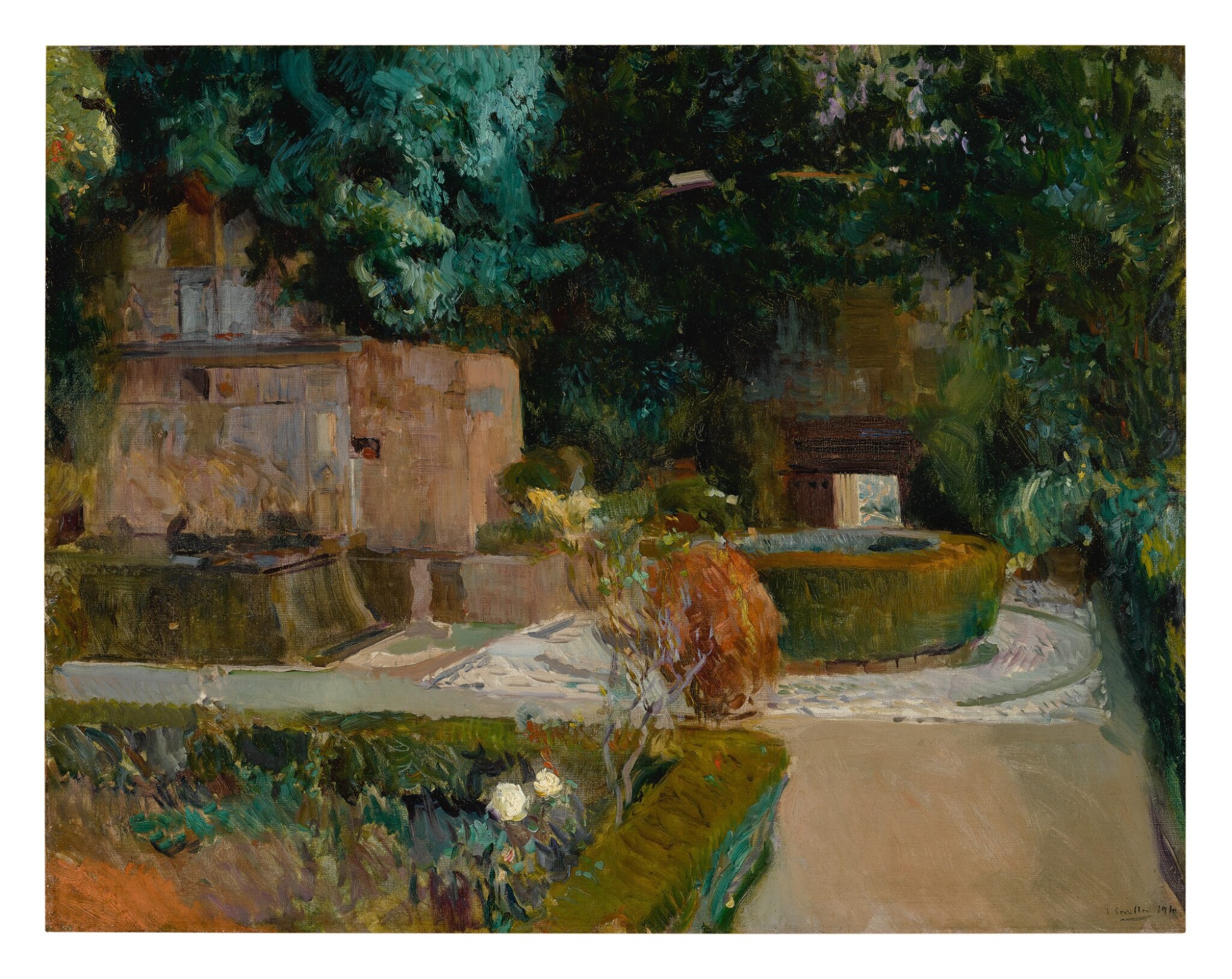 Lined. The work presents beautifully and the colors remain vibrant and fresh. The original canvas has become slightly detached from the lining at the right upper edge and is somewhat visible in the current framing. There is a restored horizontal crack in the sunlit part of the tree at upper left; and a restored vertical break at lower left (approximately 3 inches long). Some areas of the work are thinly painted. Under UV: varnish fluoresces green unevenly. In addition to the aforementioned restorations, there is a small area of inpainting at the lower edge of the dark wall at center left.

Joaquín Sorolla visited Granada for the first time in 1909, one of the most important years of his career, after he returned from his New York solo exhibition at the Hispanic Society of America and Washington D.C., where he painted President William Howard Taft. Two weeks in November of that year were not enough, and the artist returned in February 1910 for a further two weeks, when he painted Jardín de los Adarves, Alhambra, Granada.

The Alhambra complex dates from the ninth century. A strategic location in the hills above Granada, by the thirteenth century it had been expanded and made a royal residence for the kings of the Nasirid dynasty. The Jardín de los Adarves (Garden of the Ramparts) are so-called because of their location along the parapet walkways by the ramparts under the fortress. These ramparts lead to the Alcazaba, a fortress and one of the oldest sections of the Alhambra. The gardens have some of the best views the Alhambra offers, facing west over the river Darro and Granada.

A tantalizing view to the expanse of sunlit Granada is visible through a doorway just beyond the central fountain. Sorolla employs shadow and light, as well as the verdant protection of trees and vines, to guide the viewer. The path takes you to the Alcazaba, through this deserted and seemingly secret garden. The quiet tranquility provides a moment of respite for the viewer and the artist, who painted gardens as “a refuge from the fatigue produced in him by the social life he was obliged to lead by official commissions, and that is the reason why the human figure is always absent” (Sorolla. Gardens of Light, p. 136).

Jardín de los Adarves, Alhambra, Granada was included in Sorolla’s second American tour, which travelled to Chicago and St. Louis in 1911. Despite being occupied with a number of portrait commissions in Chicago after the exhibition ended, Sorolla made a day trip to St. Louis to approve the installation at The City Art Museum. According to a reporter from the Post-Dispatch, the artist waxed poetic about the city’s beauty, 'The air is more beautiful, more clear than in Spain... that so beautiful a city as St. Louis existed in the West, I did not dream... I sigh because of the demands on my time which will not permit me to remain here and paint. I have found such inspiration nowhere outside of my own country. The river alone is worth an artist’s lifetime – such life, such color, such magnificence' ('Sorolla, Great Painter, Finds No Smoke Here,' St. Louis Post-Dispatch, March 20, 1911, p. 1 as quoted in Letvin, p. 139). The exhibition opened two days later, on March 22nd, and the City Art Museum of St. Louis acquired three paintings, including Jardín de los Adarves, Alhambra, Granada.

We are grateful to Blanca Pons-Sorolla for her assistance in cataloguing this work, which will be included in her forthcoming Sorolla catalogue raisonné (BPS 1647).