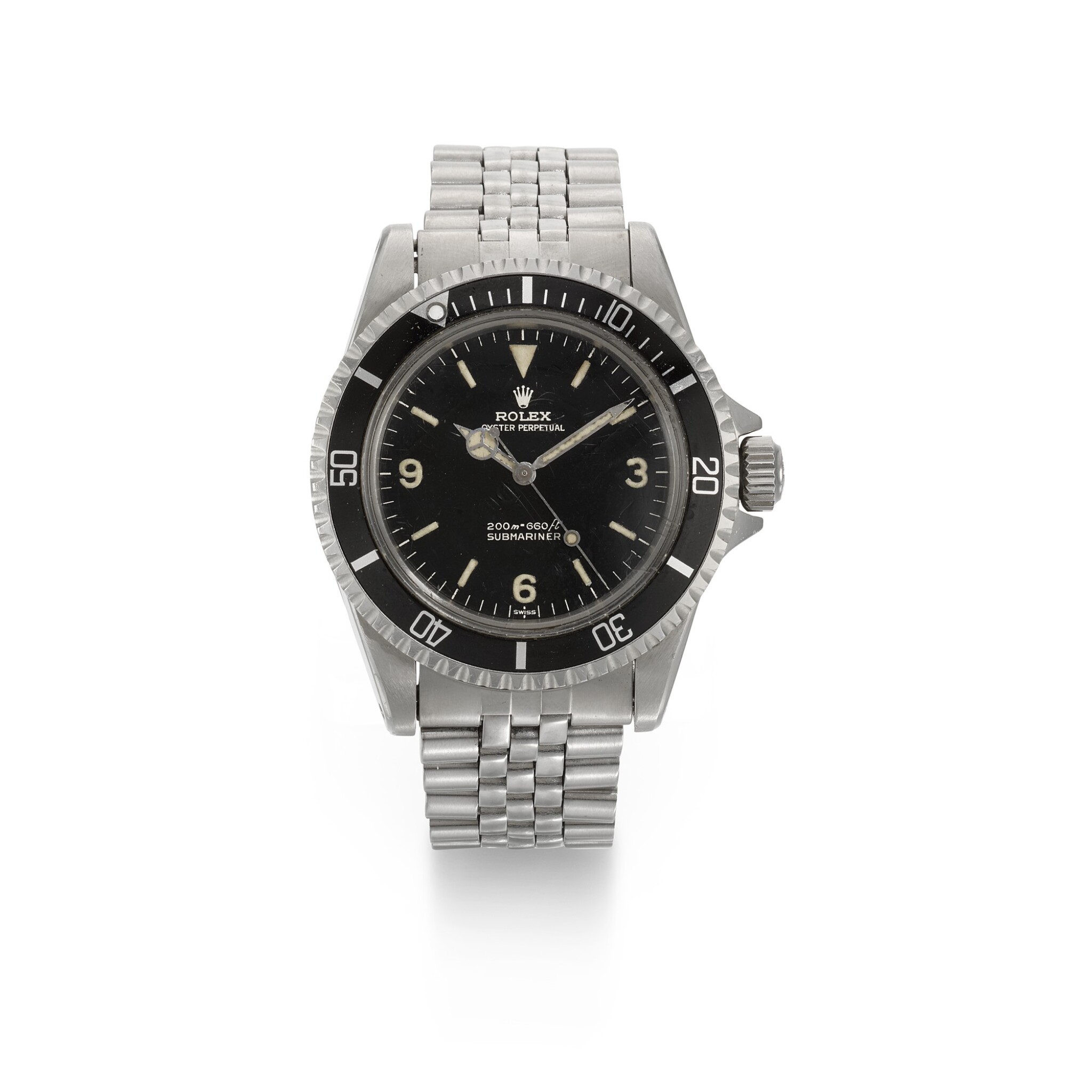 Movement: running at the time of cataloguing.

Case: in very good overall condition, the case shows clear bevels and maintains strong proportions. With moderate scuffing throughout, consistent with age and wear. The back bears light scuffing. The serial and reference number between the lugs are perfectly legible with good definition. The Jubilée bracelet ref. 50 with clasp code 62510 H / V9 (September 1996) and 502B endlinks with reasonable stretching to the links. Clasp locks firmly.

Dial: surface spotting, discolouring spots to the luminescent on the hands, overall in attractive condition

The Rolex Submariner 5513 does not need any introduction. Produced during 27 years, between 1962 and 1989, it is the model used as the reference for a vintage diving watch. The watch went through several evolution, mainly based on the different dials used throughout the production period.

During the first years of the 5513, Rolex produced some pieces with an Explorer dial in parallel to the standard dials. The ‘Explorer dial’ or ‘3-6-9 dial’ is named after its similar layout to the Explorer design as opposed to the traditional Submariner dial with the usual round, baton and triangle indexes. Explorer dials can also be found on the 5512 during the same period as well as on some examples of earlier references such as 6538, 6200 and 5510. Interestingly, the very vast majority of these 5513 fitted with this special dial were sold in the UK, suggesting an availability limited to that country, which was at the time one of the most important markets for the crowned brand.

In fact, there are several types of explorer dials further divided into two main categories based on the luminescent material used: radium or tritium.

The present lot is part of the earlier production with radium material. These dials usually have a monochrome text in gilt, like this lot, creating an attractive harmony throughout. This piece has a wonderful patina with well rounded fat indexes and matching hands that beautifully complement the gilt lacquered black dial.

The case framing it is in well preserved and attractive condition, with strong proportions, defined bevels and very legible case and reference numbers between the lugs.

In addition to its clear provenance, this wonderful watch is extremely well documented and is accompanied by its original Rolex Guarantee booklet, Certificate of Guarantee by Garrard, the original Rolex presentation case as well as extensive Rolex service paperwork.

Until today, the watch has remained in the family of the original owner who's fascinating life has been closely linked to underwater world.

Indeed, his interest in diving began in the late 1950s at The Nautical College in Pangbourne, where he was awarded a copy of Jacques Cousteau's The Silent World at a prize ceremony presided over by the Duke of Edinburgh.

He later became a member of his university's diving club. An engineering student, he made his own scuba equipment, repurposing emergency inflation cylinders from a local RAF airfield for use as diving cylinders and fashioning his own foam rubber diving suit. His enthusiasm was such that at his graduation a girlfriend gifted him a Rolex Oyster Perpetual Submariner, the present lot.

His career in the fishing and shipping industries would go on to give him extraordinary opportunities to pursue his passion. He, and his faithful horological companion, dived off Gough Island and Tristan da Cunha in the South Atlantic, and off the Spanish coast of the Mediterranean. On a road trip with a friend from England to southern Africa in the sixties he dived at Massawa on the Red Sea, off Zanzibar and in Walvis Bay in Namibia. He eventually settled for some time in Cape Town where he had many opportunities to dive out at sea, in Table Bay and around the coast.

While living in South Africa, he even had the opportunity to meet and speak with his hero. He was invited as a guest of the Consul of France in Cape Town to a drinks reception hosted by none other than Jacques Cousteau, aboard the famous research vessel Calypso.

After many years of careful, adventurous ownership the watch was eventually given as a gift to his son, who now offers it for sale at auction.

Sotheby's is extremely pleased to present this superb and well documented piece.