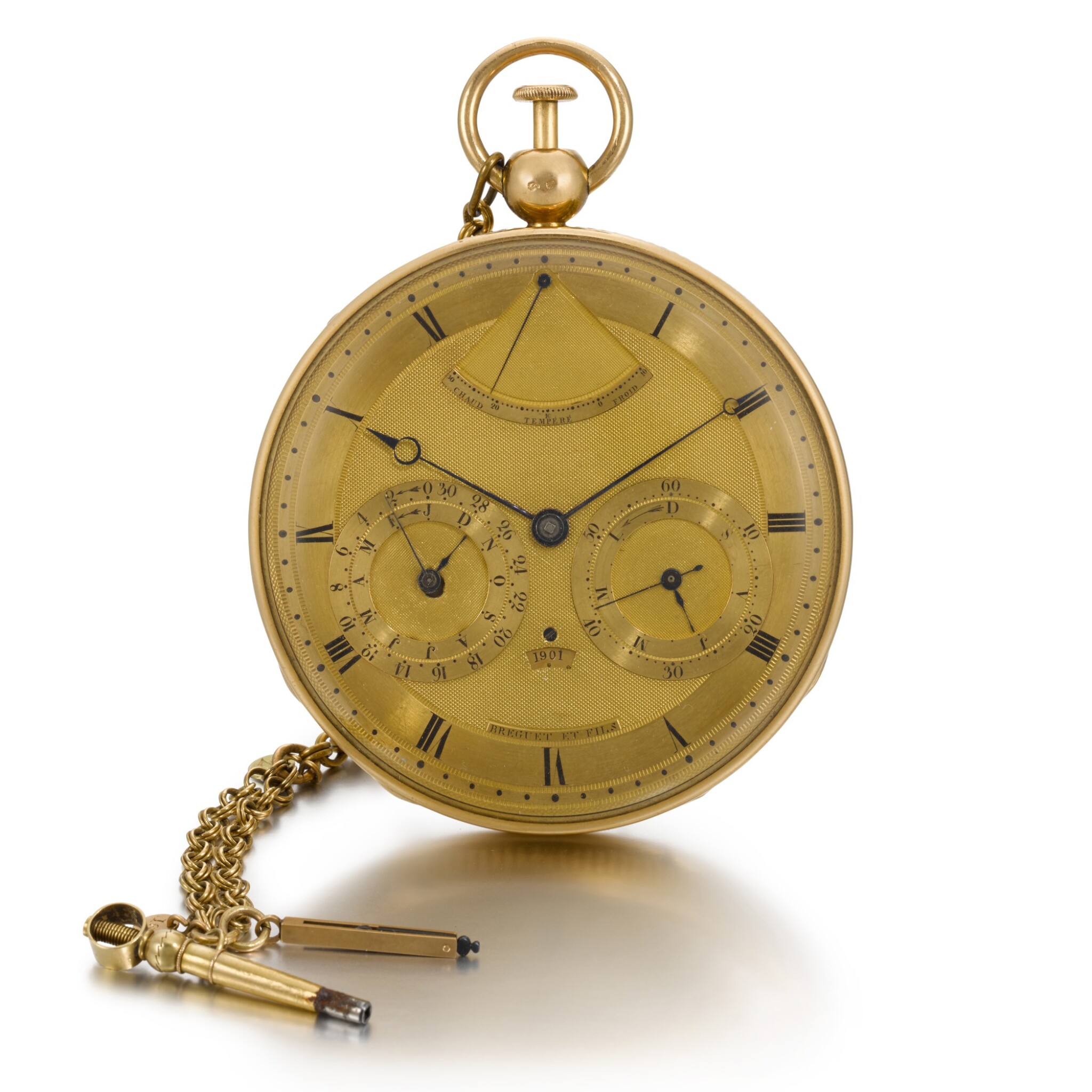 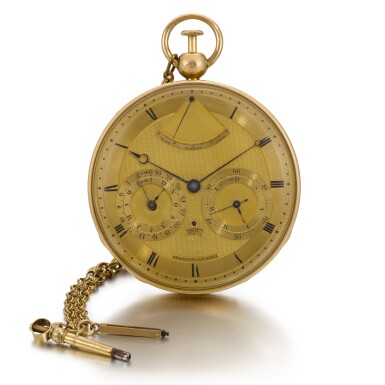 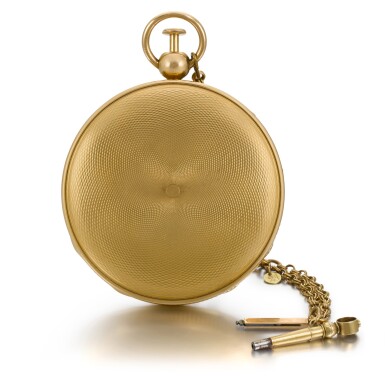 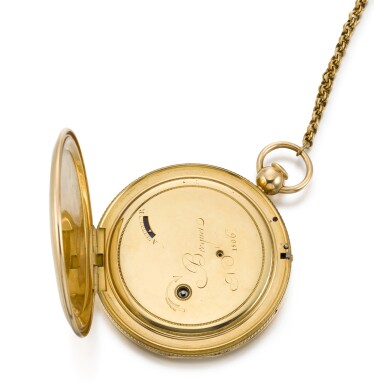 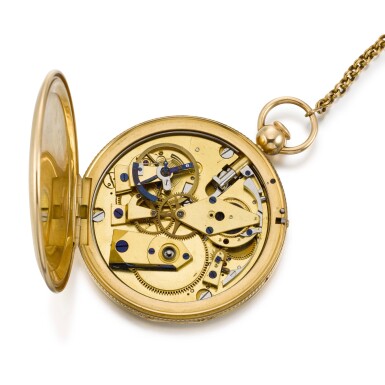 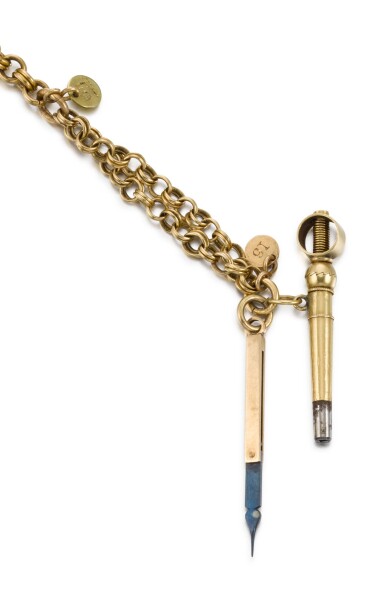 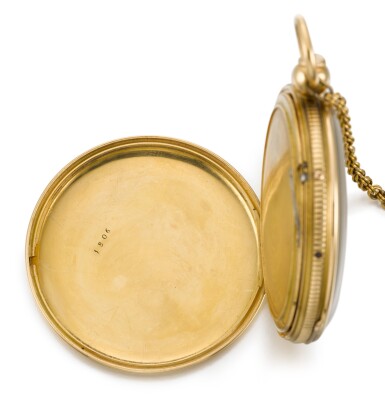 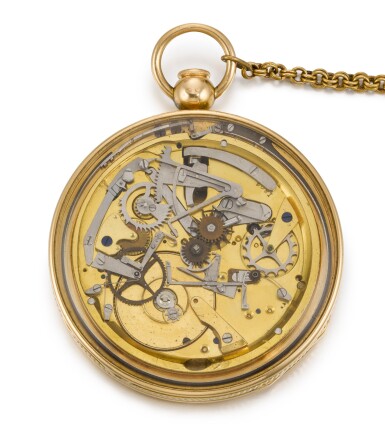 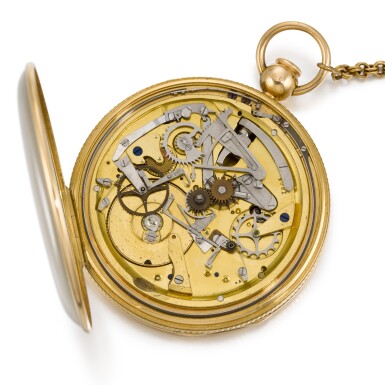 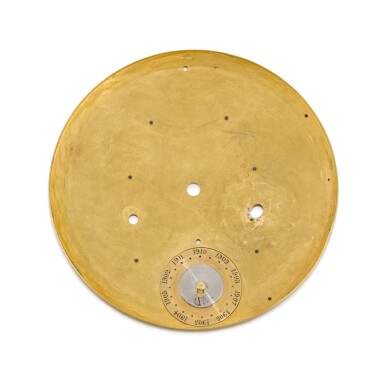 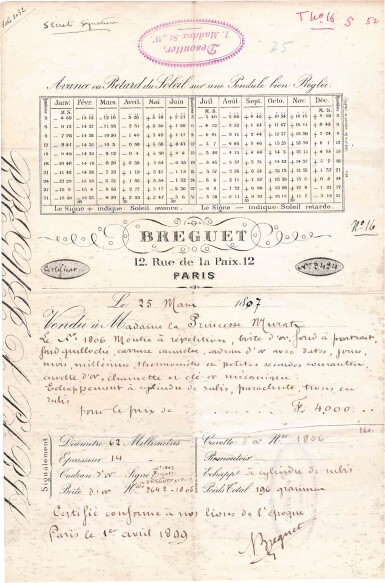 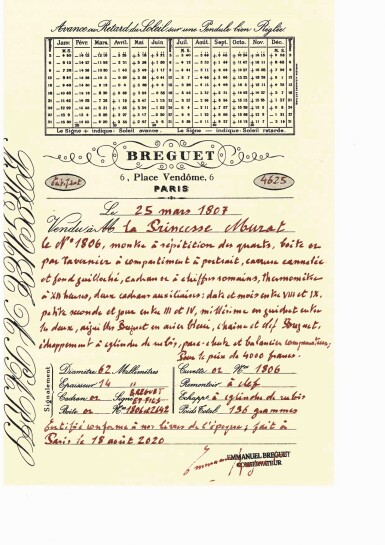 THE CAROLINE BONAPARTE NO. 1806

NO. 1806 SOLD TO CAROLINE BONAPARTE, PRINCESS MURAT ON 25 MARCH 1807 FOR 4000 FRANCS AND LIKELY PURCHASED AS A GIFT BY THE PRINCESS FOR LE COMTE DE FLAHAULT

• Dial: gold, satin-finished chapter ring, Roman numerals, subsidiary dials to the right for seconds combined with inner circle for days of the week and to the left for date of the month combined with inner circle for month of the year, the day, date and month each with arrow indicating their counter-clockwise progression, aperture between subsidiaries for year indication, sector above for thermometer, blued steel hands with jumping hour hand, signed Breguet et Fils, further signed and numbered with secret signature and numbered 1806 either side of XII, dial plate also numbered to the underside 1806

• Case: gold, engine-turned, fluted band against an engine-turned ground, quarter turn repeating piston in the pendant, secret inner concealed hinged cover with vacant reserve for portrait miniature, recessed pusher to the band with two settings, first releasing case back, the second releasing the concealed cuvette, further gold cuvette over movement with apertures for winding and regulation and signed Breguet No. 1806, case back refinished and numbered 1806, pendant with French control marks

• Key: with a gold chain, ratchet key and hinged blued steel pointed tool for engaging button for releasing case back and concealed cuvette, the blued steel tip hinged into a pink gold shaft

Movement: running and repeating at the time of cataloguing. The year disc was not removed however, with the dial removed, the back of the year disc is clearly seen to be calibrated from 1902-1911 and as the current year visible to the front is 1901, it seems likely that the disc's front is calibrated from 1892-1901.

Dial: with scuffing to the surface, the hole for the arbor of the hands in the day/date subsidiary dial is uneven with gapping to the lower side, some indentations at the centre of the same dial.

Case: in refinished condition with clear engine-turning. No French hallmarks to inside back or either cuvette. Movement cuvette is lacking securing screw and is therefore loose. To release the case back the pusher to the band is pressed in lightly, to release the concealed cuvette the pusher must be pushed in deeper - at present the catch is slightly sticky and does not always release the secret cuvette.

The gold engine-turned dial displays day, date, month and, unusually, the year. In typical Breguet fashion, what may otherwise have required an extremely complex arrangement is instead elegantly and ingeniously executed. George Daniels described Breguet’s solution as follows:

“In no. 1806…by means of a 2:1 reduction from the hour hand a twenty-four hour wheel advances the day and date hands. Each full revolution of the date hand turns the month hand wheel one tooth to indicate the following month and each full revolution of the month wheel advances the year wheel one tooth. There is no provision for 31-day months and the hand must be set accordingly.” The Art of Breguet, p.75.

The year disc is double sided with each face marked for a 10-year cycle - the side currently visible through the aperture is engraved up to the year 1901, the reverse is calibrated from 1902-1911. One may therefore assume that this disc was intended to be replaced at service intervals, the current year disc having itself been changed before the turn of the 20th century.

Breguet devoted considerable time to the development of the thermometer applying the feature both to his watches and, in isolation, to rings or fobs. In this watch the fan-form sector for thermometer acts not only as a useful display, but also has the added advantage of enhancing the dial's balance and symmetry. As the temperature rises and falls, a bi-metallic strip mounted around the outer edge of the movement expands and contracts. The strip is connected to a rack and pinion which moves back and forth as the strip changes its shape, thereby causing the thermometer’s hand to traverse the dial’s scale.

Breguet no. 1806 was purchased by Princess Murat, better known as Caroline Bonaparte. Caroline Bonaparte was born on 25 March 1782, the younger sister of Napoleon I of France. In 1800 Caroline married Joachim Murat, a trusted and respected Cavalry leader under Napoleon. By 1814 the present watch, no. 1806, was in the possession of Auguste-Charles-Joseph le Comte de Flahault (1785-1870). Although officially the son of Alexandre-Sébastien de la Billarderie Comte de Flahault (executed 1794) and Adélaïde Filleul, marchioness of Souza-Botelho, it is widely believed that Auguste-Charles-Joseph was in fact illegitimate and the result of an affair between his mother and Prince Talleyrand. Auguste-Charles-Joseph joined the Cavalry in 1800 and was appointed an aide-de-camp to Joachim Murat. Given Charles Joseph’s close relationship to the Murats, it seems likely that the present watch was purchased as a gift for him by Caroline. Furthermore, Caroline became Comte Flahault’s lover in 1804 and bearing in mind the fact that the watch has a concealed inner cuvette which at one time contained a portrait miniature, it is interesting to speculate that it was perhaps Caroline’s portrait that the watch contained. In any event the watch was later returned to Breguet by Comte Flahault on 4 June 1814 and re-sold by Breguet in 1815. It seems probable that the portrait miniature was removed at that point, if not for privacy reasons then at least for the fact that it would have been of little relevance to a new, unrelated owner. Records show that Comte Flahault exchanged Breguet watches on more than one occasion – on 21 August 1814 he bought Breguet no.2200, perhaps intending it as a replacement for no.1806; in 1822, no.2200 was purchased back by Breguet with Comte Flahault purchasing no.3802, a Breguet lever watch, the same year. Following Auguste-Charles-Joseph’s affair with Caroline Murat, the Encyclopaedia Britannica notes that he took Countess Potocka as his mistress before becoming involved in a love affair with Napoleon’s daughter-in-law, Hortense de Beauharnais, Queen of Holland with whom he had an illegitimate son, later known as the Duc de Morny. Auguste-Charles-Joseph became an aide de camp to Napoleon in 1813 and served at the Battle of Waterloo. He later settled in England where, in 1819, he married Margaret Elphinstone, later Baroness Keith. In 1827 he returned with his wife to France and would later serve in the household of the Duc d’Orléans before becoming Ambassador in Berlin (1831), Vienna (1841-1848) and London (1860-1862).

At the time of the present watch’s purchase, in March 1807, Caroline and Joachim Murat were very much in the ascendant. The year before, Caroline and her husband had been granted the Grand Duchy of Berg and Cleves and the following year would see their elevation to King and Queen Consort of Naples. Caroline was a powerful figure, acting as Regent of Naples on at least four occasions during her husband’s military absences. The pair’s wealth enabled them to spend lavishly on parties and entertainment, however, Caroline was also a supporter of girls’ education and a great patroness of the arts; among other acts she encouraged the archaeological excavations at Pompeii. During the Hundred Days in 1815, it became clear that the European powers were working to return Naples to its pre-Napoleonic rulers. With Napoleon’s fortunes waning, Caroline sought an alliance with the Austrian Empire, yet she was later forced to surrender and fled to Austria. Her husband fled to Corsica and his subsequent attempts to regain control of Naples ended in failure; Joachim was eventually captured and executed on 13 October 1815. After the second French revolution of 1830, Caroline was allowed to settle in Paris before later moving to Florence where she died on 18 May 1839. Between 1808 and 1814 Queen Caroline purchased some 34 further clocks and watches from Breguet. These included a remarkable watch designed to be worn on the wrist – oblong in design it was an ultra-slim repeating watch with thermometer, the whole mounted on a band of hair entwined with gold thread. Caroline’s importance to Breguet was highlighted during the European Crisis in the summer of 1813; at a time when Breguet had lost the majority of their best clients, Caroline bought twelve further watches from the firm, including eight repeaters.