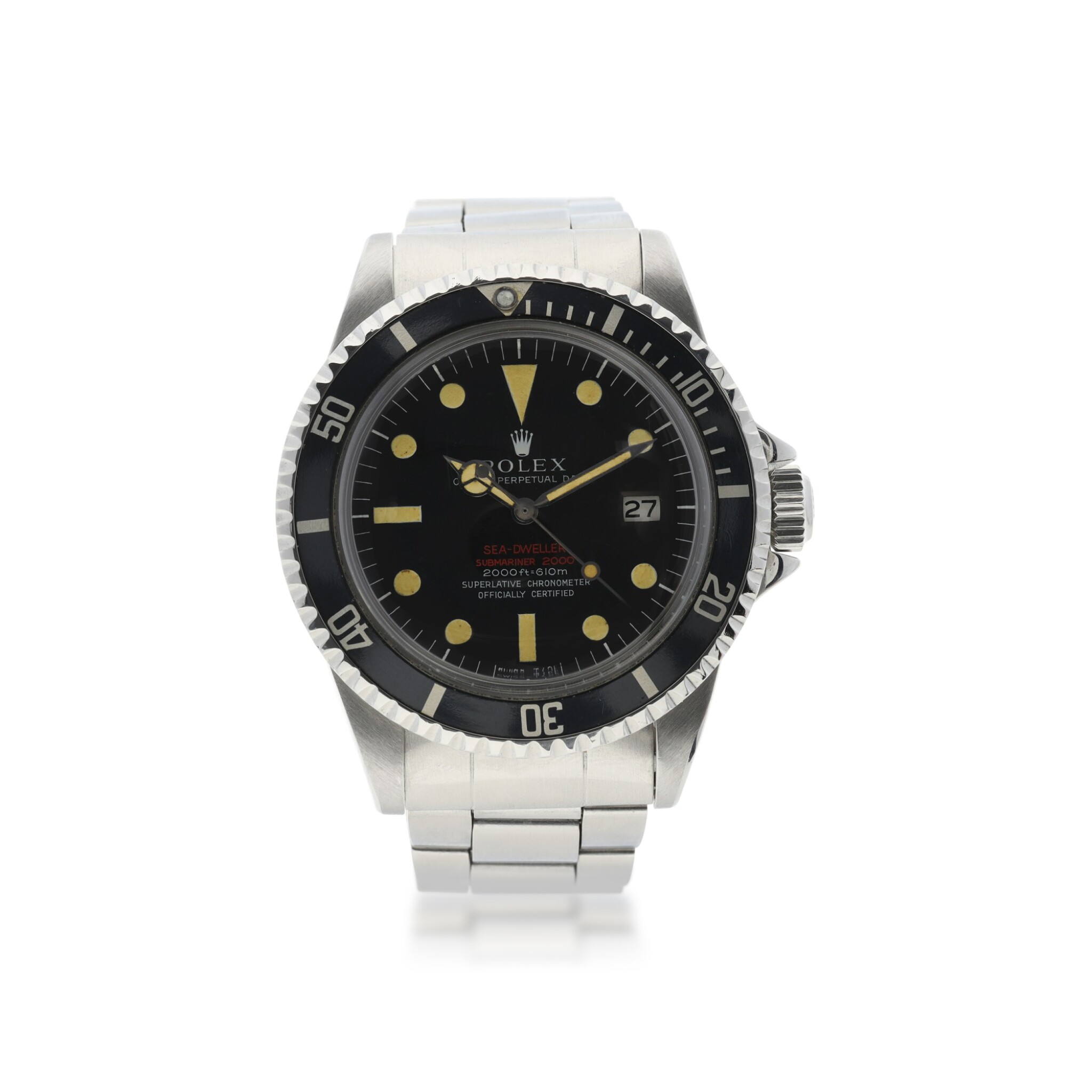 A STAINLESS STEEL AUTOMATIC WRISTWATCH WITH DATE AND BRACELET, CIRCA 1971

Dial: Dial in overall very good condition and has taken a pumpkin color to the luminous plots. Service hands have scratches and oxidation.

Movement: Date function operating. The movement is running at the time of cataloging, however it was not tested for accuracy of time or duration of the power reserve and may need service at the buyer's discretion. Please note that Sotheby's does not guarantee the future working of the movement.

Launched in 1967, the celebrated Sea-Dweller reference 1665 was the first wristwatch designed for use in saturation diving. The firm fitted the model with a gas escape valve and guaranteed waterproof to 610 meters depth. The valve was first developed on the Submariner model and allows helium and other gases to escape, enabling the watch to withstand compression during saturation diving.

On the dial, two lines of text were printed in red: The Sea-Dweller text, and below, Submariner 2000, thus giving the watch its nick name, the “Double Red” or ‘DRSD”. Like the Submariner, it has a date window at 3, but it does not feature the cyclopes on the plexiglass. Another quirk of the Ref 1665 is that due to its specific waterproof specifications, the case back is stamped with the serial number to prevent it being swapped out in service. In early examples, it was just the last three digits of the serial, while later ones had the full serial engraved.

The Ref 1665 was made in four versions over its lifetime, defined as such:

MK1: Exclusively ‘Patent Pending’ examples with Sea-Dweller and Submariner print of equal size and with the red print printed over the white. The red print has faded to pink on many examples. The Rolex coronet with thicker style.

MK2: Submariner 2000 text is smaller, coronet remains the same (short fingers), found on both the ‘Patent Pending’ and early ‘Patented’ versions. The "D" in Sea-Dweller lines up with "I" in Submariner 2000.

MK3: Red printed text remains similar to the MK2 but with heavier to the depth rating. Coronet more pronounced and elongated with flatter bottom. The "D" in Sea-Dweller lines up with the "R" in Submariner 2000.

MK4: The final version of the original dials is again a slightly heavier print for both the red and white text, the coronet has broader fingers and a more pronounced opening.