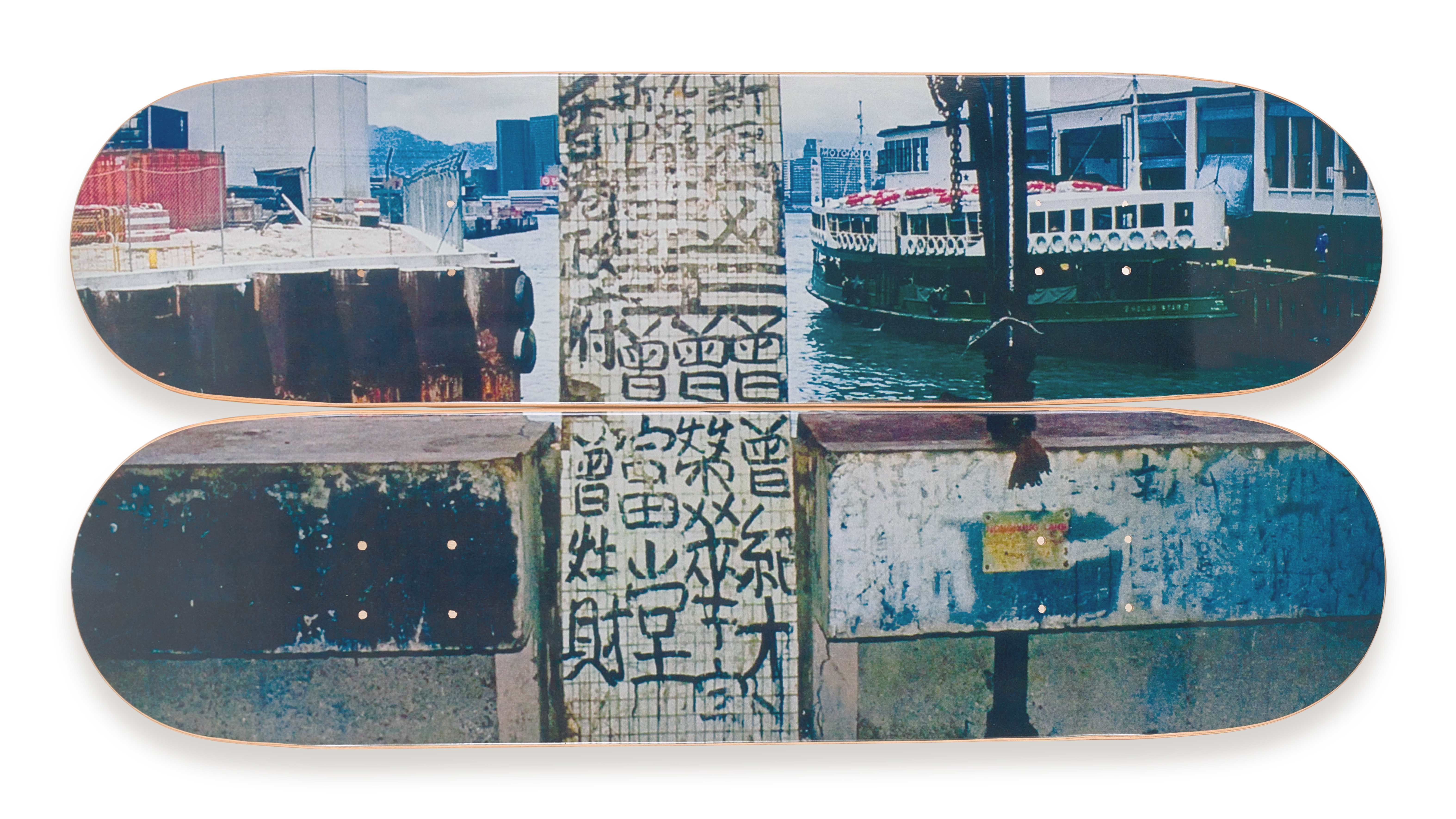 Tsang Tsou Choi's calligraphy style was rustic and free, his brushstrokes were thick, heavy and decisive. He often wrote the words "國王" ("king") much wider to straddle across two lines. Above the words, he would list the names of several places that belonged to his territory. The current skateboard design came from Lau Kin-wai's photographic work Central, Hong Kong, which captured Tsang's calligraphy listing "Kowloon, the New Territories, and New China" (the latter probably refers to Mainland China). The words "中國" and "國王" both contained the character "國" ("country"). Tsang also regularly included the names of his family members in his calligraphy, listed according to their family hierarchy. In Central, Hong Kong, the name of Tsang's son, Tsang Wing Wah, was also in the calligraphy.

In Central, Hong Kong, the image of a docking Star Ferry appears alongside Tsang's calligraphy in the foreground. Viewing the photograph twenty years later, it is as if the King was conversing with the contemporary city across space and time.

Tsang Tsou Choi was born in 1921 in Liansu Village in Zhaoqing, Guangdong. At age seventeen, he moved to Hong Kong where he worked as a construction worker and a waste collector. On one visit to an ancestral village in Yuen Long, Hong Kong, he allegedly found in his family record that his ancestor was granted the possession of Kowloon. Thus he came to believe that most of the peninsula belonged to his family, and beginning 1956, Tsang started calling himself the "King of Kowloon." He painted calligraphy in the streets of Hong Kong as a way to declare his form of sovereignty over the territory.

Although Tsang never received formal training in art, he was able to create an original calligraphic approach using the public space as his canvas. Guided by his own creativity and a free spirit unhindered by convention, he painted his family legacy in all corners of the city. He was staking the territory of his kingdom, anointing himself the crown king of this fantastical domain. Tsang Tsou Choi's street calligraphy found its inspirations from the city of Hong Kong and its local culture. His work, as well as images of him painting on the streets, have also become a fixture of the collective memory in Hong Kong over the years.