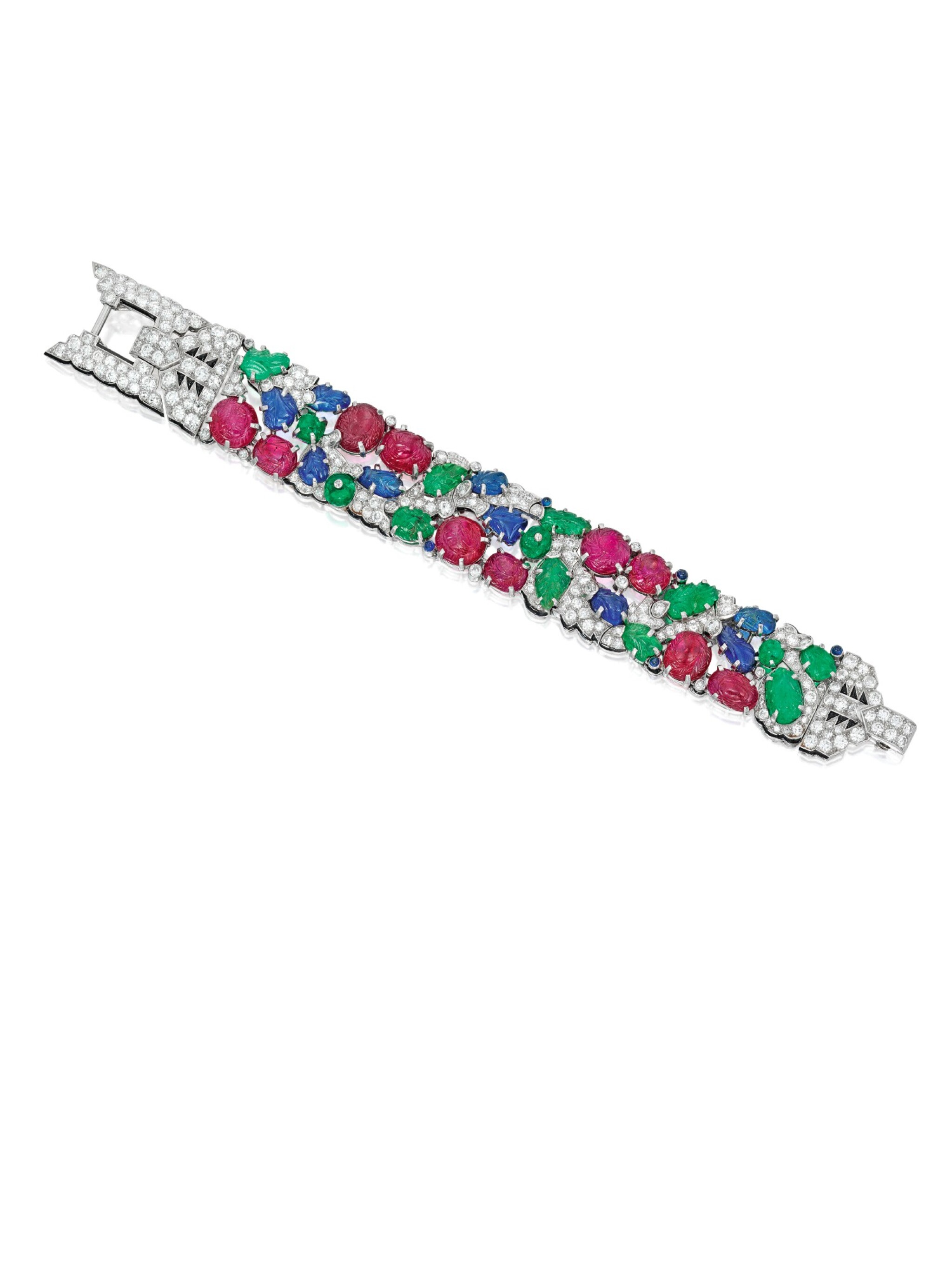 In good condition, with light wear and scratching to the platinum mounting, commensurate with age. The carved rubies range from medium pinkish red to medium deep purplish red; the sapphires from medium light to deep blue; and the emeralds from light green to medium deep bluish green. As typical for the type, the carved colored stones display varying degrees of transparency and color-zoning; moderately to heavily included with surface-reaching inclusions. The cabochon sapphires are medium blue and translucent. The onyx in overall good condition. The enamel with areas of loss, noticeable under close inspection. The diamonds estimated to weigh approximately 8.00 carats are approximately F-I color, VS-SI clarity. The bracelet opens by means of lifting the tab-form clasp from the front, using the crescent-form thumb piece. Width of band approximately 15/16 inch. Highly articulated and flexible.

"Never copy, only create." This mission statement, embraced by brothers Louis, Pierre and Jacques, yielded jewels of extraordinary originality and beauty, propelling Cartier to never-before-seen levels of global success in the early twentieth century. During this period, the firm was well-known for taking inspiration from the "exotic," but nowhere was this more masterfully expressed than in their tutti frutti jewels.

Cartier's first foray into the style was a necklace for Queen Alexandra who, as the wife of King Edward VII and by extension Empress Consort of India, commissioned a piece to complement three Indian-style dresses. Ten years later, in 1911, Jacques ventured to India where he amassed a vast collection of carved colored stones which he employed in a further refinement of the style, taking advantage of recent advancements in the manipulation of platinum. After being exhibited at the 1925 Exposition Internationale des Arts Décoratifs et Industriels Modernes in Paris, tutti frutti jewels rapidly gained popularity among the most fashionable and discerning collectors of the day, including Mrs. Cole Porter and Daisy Fellowes.

Cartier produced a variety of tutti frutti jewels and objects, both for stock and special-order, with bracelets being the most sought-after form. All pieces share the hallmark of Mughal-cut colored stones, but each piece is unique, a variation on a captivating theme. The present lot is distinguished by the vibrancy of its gemstones-with rubies predominating-and by the lines of black enamel, placed intermittently along the trim of various elements. The enamelwork is applied to just one side-a particularly clever flourish-echoing the organic asymmetry of the foliate elements. The bracelet returns to a more traditional Art Deco aesthetic with its pavé-set diamond clasp, highlighted by onyx triangles and chevron-shaped closures. The overall design, and execution, is unmistakably Cartier.

Sotheby's is honored to present this iconic jewel, created almost a century ago, via a thoroughly modern platform. Never copy, only innovate.