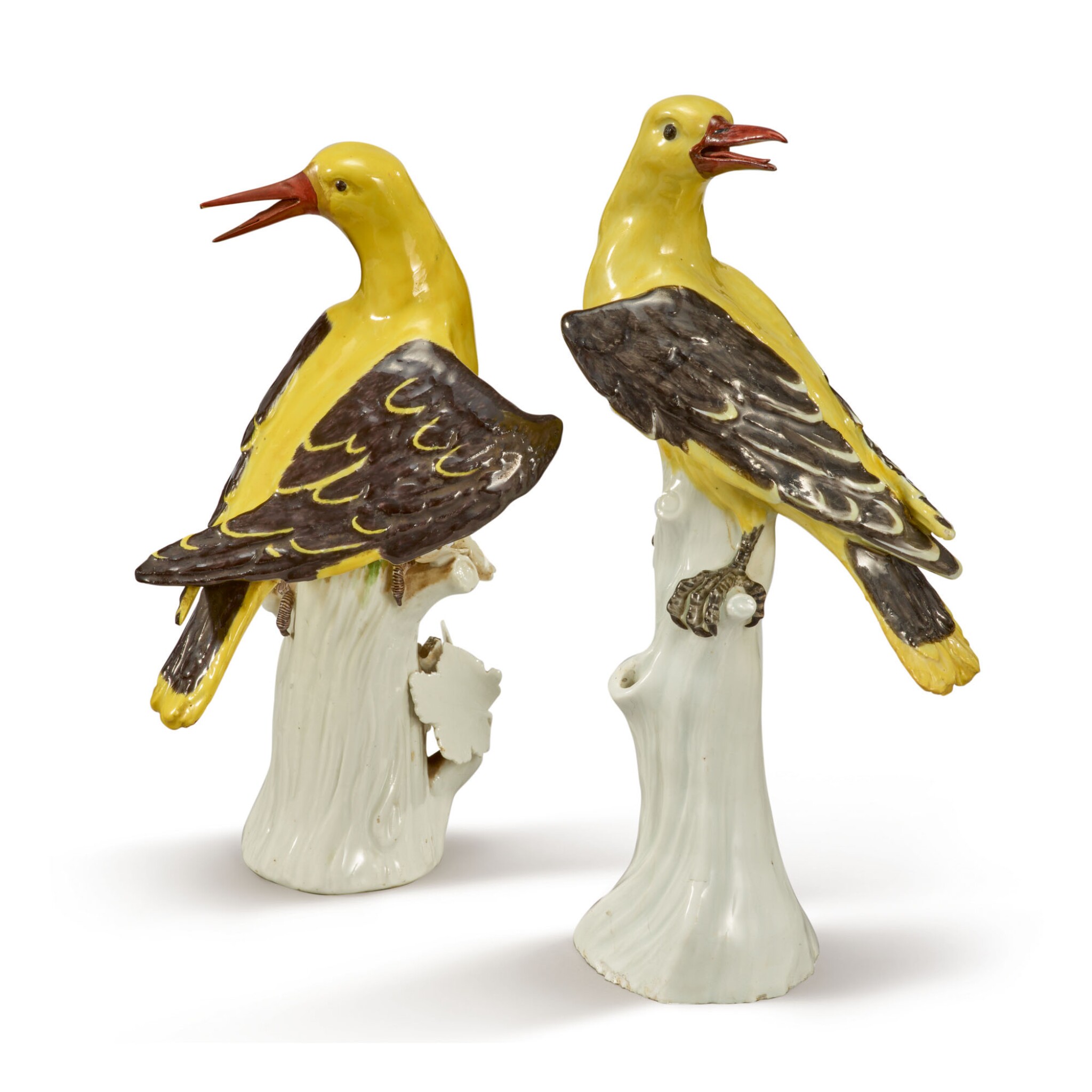 modeled by Johann Joachim Kändler, each with yellow and black plumage, the taller perched on a slender stump, crossed swords mark in underglaze-blue to rear of base, the other on a stump applied with leafy branches

Bird perched on plain stump - beak restored back on; restored chips to end of tail feathers. Small chips around bottom edge of base. Small oval firing flaw under left leg (stained crack, could be cleaned) Bird on leafy stump - broken off base near the top and restored back on, the repair overpainted in green. Small section of applied branch chipped away, some chips and losses to leaves. Bird's tail has been broken off and glued back on. Front edge of bird's left wing has been broken off and glued back on. Beak is restored, and probably mostly a made up replacement. Two claws are chipped away. The bird has apparent faint repaired breaks to the neck area, which are under the enamel and presumably happened at the biscuit firing stage. Please note this bird was described by Christies in 2006 as later decorated. In our opinion this does not appear to be later decoration. The restoration and repair on both birds is old and should be re-done.

Carl Albiker notes in Die Meissner Porzellantiere (1935 edition), p. 122, models of orioles were also consecutively worked by Johann Gotlieb Ehder in 1740 and Peter Reinicke in 1747, illustrating four examples, pl. XXIX, no 112. Another similar pair of this model, one of which bears the Japanese Palace inventory number No. 315, is illustrated in Yvonne Hackenbroch, Meissen and Other Continental Porcelain, Faïence and Enamel in the Irwin Untermyer Collection, color pl. 6, fig. 5, where the author on p. 6 ascribes them to Ehder, circa 1740-41, "after the earlier Kaendler models of March-June 1734." The lack of descriptions in the work records render it difficult to date these golden orioles with certainty; however, the higher stumps are more typical of the earlier models.

Samuel Wittwer writes in The Gallery of Meissen Animals, Augustus the Strong's Menagerie for the Japanese Palace in Dresden, Munich 2006, p. 345, that the inventories of 1770 and 1779 list "six golden orioles with black wings on white pedestals decorated with leaves" with the inventory number N= 283- W; and "ten orioles with black wings, 8 of which are standing on high pedestals decorated with leaves, but 2 of the pedestals are simply ('schlecht') done." Three orioles were included in the sale of porcelain from the Royal Saxon Collection, Dresden, held at Rudolph Lepke's Kunst-Auctions-Haus, Berlin, 7-8 October, 1919, lots 107 and 108 (plain bases) and 109 (base applied with branches).