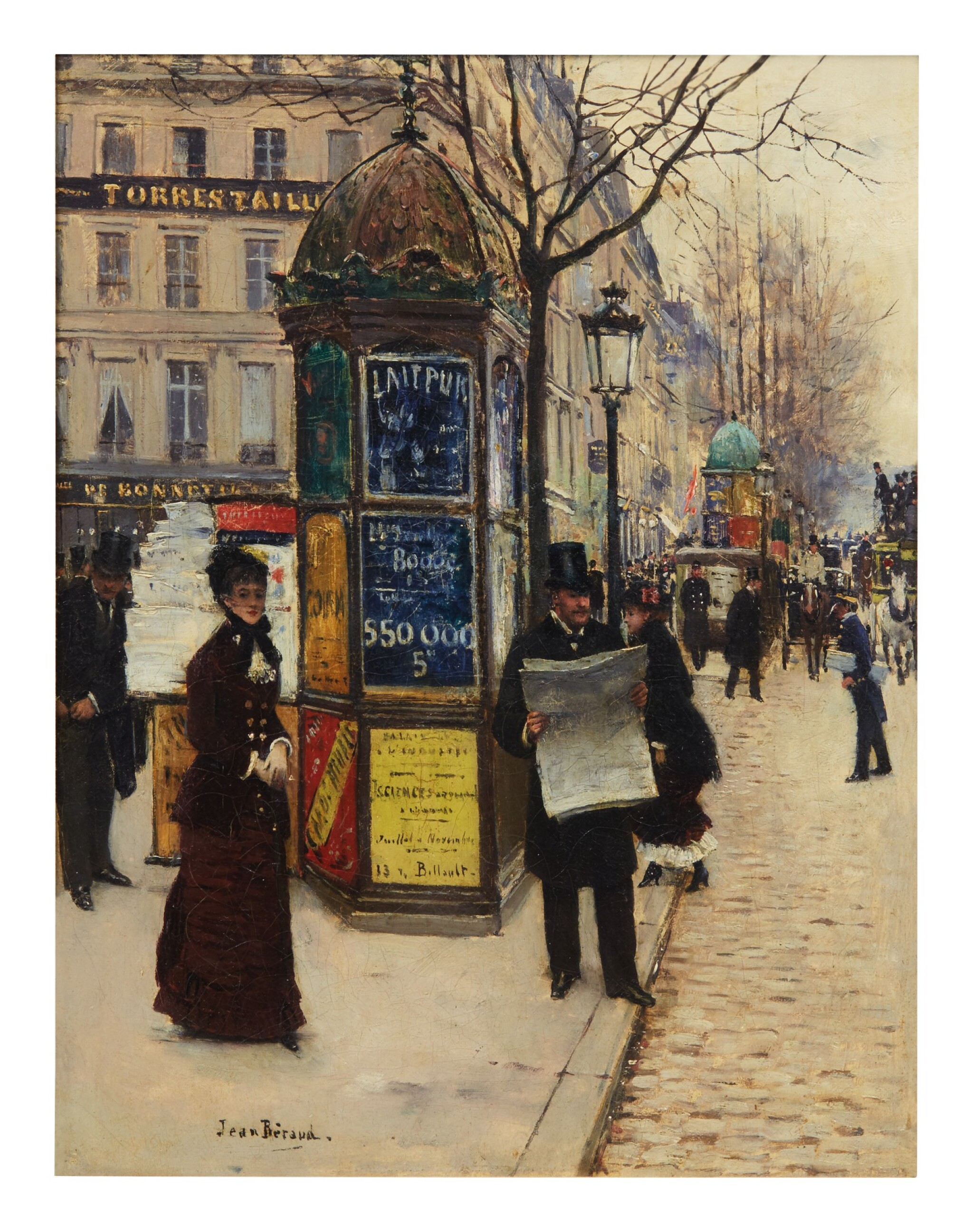 The following condition report was kindly provided by Simon Parkes Art Conservation, Inc.: This work has been restored. The canvas is lined, and an original canvas maker stamp has been transcribed onto the reverse of the lining. The paint layer may be slightly dirty. No retouches are visible under ultraviolet light. It is unlikely that any have been applied, except possibly in the black colors around the head of the figure reading the newspaper. The work could be cleaned, but freshening the varnish would make the work ready to hang.

The opulent spectacle of Belle Epoque Paris, particularly its people, was Jean Béraud's subject of choice. Whether promenading on the city’s grand boulevards, such as in the present work, or the banks of the Seine, riding in carriages in the Bois de Boulogne or frequenting the city’s bars and bistros, an endless parade of characters animates Béraud’s vibrant and idiosyncratic vision of Paris. Abandoning his early ambitions to become a lawyer, Béraud studied portraiture with Léon Bonnat, alongside such well-known contemporaries as Gustave Caillebotte and Henri Toulouse-Lautrec. While Béraud initially emulated his teacher and painted portraits of women and children, he was quickly drawn to modern urban life and developed his own reputation as one of Paris’s most scrupulous and devoted observers. As journalist Paul Hourie described: “When you paint scenes from everyday life you have to place them in their context and give their authentic setting. This means that, in order to be sincere, you have to photograph them on the spot and forget about the conventions of the studio. As a result, Jean Béraud has the strangest life imaginable. He spends all his time in carriages… in search of a scene” (as quoted in Offenstadt, p. 9). The artist’s ingenious mobile studio allowed careful study of the activity of the city, and this immediacy allowed him to capture both fleeting moments and create lasting documents of contemporary social trends.

﻿Paris’ celebrated, expansive boulevards were the result of Baron Haussmann’s reconstruction of the city from 1853-1870. Complementing the elegant thoroughfares were cast iron structures intended to support, and enhance, modern life. Gabriel Davioud was responsible for much of the unifying design of lampposts, street signs, park benches, fountains, and the hexagonal domes atop advertising posts, later known as colonnes Morris, and kiosques à journaux. The first newspaper kiosk opened in 1857 and soon could be found throughout Paris, becoming an iconic element of the city’s cultural landscape and the central subject of Les grand boulevards (fig. 1). As an American writer noted in 1888, the kiosque à journaux was “a little sentry-box… just large enough to shelter the news-vendor…. On a little stand in front of the kiosque are tiny heaps of the countless newspapers of the city, and on strings on each side are pendant numbers of the chief illustrated journals, artistic and comics. These kiosques are scattered along the boulevards, and from them the Parisian buys his 'Figaro' in the morning and this 'Temps' at five in the afternoon” (Brander Matthews, “Notes on Parisian Newspapers,” Century Illustrated Monthly Magazine, v. 35, 1888, p. 200). Just as described, Béraud captures readers eager for the day’s news as a man digs in his pocket for coins to buy the latest edition from the stacks on display, while a boulevardier, absorbed in his paper, is about to step off the curb onto the busy street. In addition to selling newspapers, the kiosques served as advertising space, and in the present work, just below a bright-blue poster for lait pur (fresh milk), is an announcement of an event running from July to November on the rue Billault (renamed rue Washington in 1897) where Béraud lived from 1876-1895. Above the kiosque’s dome is the golden lettering of Torres Tailleur, then located at 9 boulevard des Italiens. With royal patents from the king of Portugal and the emperor of Brazil, Torres specialized in women’s riding clothes and court costumes (Offenstadt, p. 112).