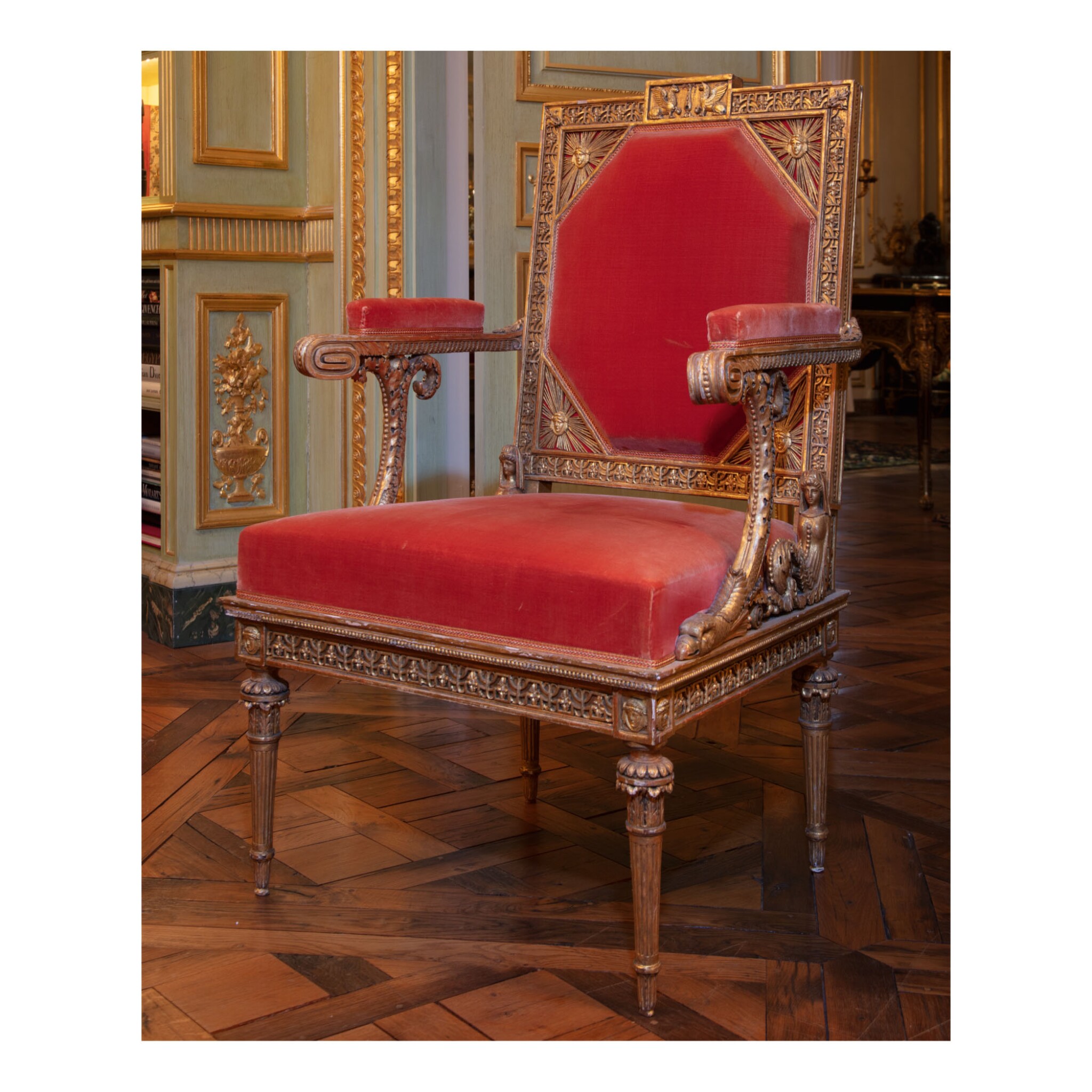 Scattered minor losses and surface dust to gilding throughout, visible in catalogue images. Gilding is nice colour. A few very minor losses to the carved elements, primarily to the carved leaf tips at top of legs and to some of the beading on the seat rail edges, and to a very small section of the lined fretwork on the back frame. Armrests slightly loose at joints, but chair is sturdy overall. Some marks and minor rubbing to velvet covering.

In addition to London and Paris, Vienna was one of the most febrile and innovative centres of European design at the end of the eighteenth century, typified by this engagingly inventive and masterfully carved armchair. An identical armchair is in the Austrian Museum of Applied Arts (MAK) in Vienna and illustrated in Christian Witt Dorring, 'Empire oder Hofisches Biedermeier', Kunst und Antiquitaten, November 1991, p.19. The overall form is similar to designs published in Viennese pattern books in the early 1800s, notably those of the architect Georg Pein (1775-1834). Interestingly, the Museum of Applied Arts also has a pair of later giltwood armchairs conceived in a similar spirit from a larger set supplied by the royal cabinetmaker Josef Ulrich Danhauser (1780-1829) to the Archduke Karl's palace in Vienna (now the Albertina) in c.1820. Although these have scrolled backs and rear sabre legs inspired by the French Empire designs of Jacob, they share many elements in common including the distinctive scrolling armrest supports headed by bold leaf carving, gadrooned and acanthus capital front legs and profusely decorated seat rails and uprights. Danhauser's prolific workshop was already in full operation by 1808, and it cannot be ruled out that he may have had a hand in designing these chairs or at the very least drew inspiration from them.

The MAK armchair comes from a larger set of seat furniture sold at the Dorotheum Vienna, 2 December 1966, lot 982, by repute from the collection the Austrian Foreign Minister Graf Leopold Berchtold (d.1809). Another pair of chairs of the same model was sold Sotheby's New York, 18 October 2016, lot 13. These were part of a larger set reputedly in the collection of Maria Leopoldine of Bavaria (d. 1848), second wife of the Palatine Elector Karl Theodor of Neuburg-Sulzbach (d.1799). That both these groups along with the Danhauser Albertina suite were supplied to important aristocratic patrons underlines the appeal this model held for an elite clientele, with its costly gilding and exquisite but labour-intensive elaborate carving.