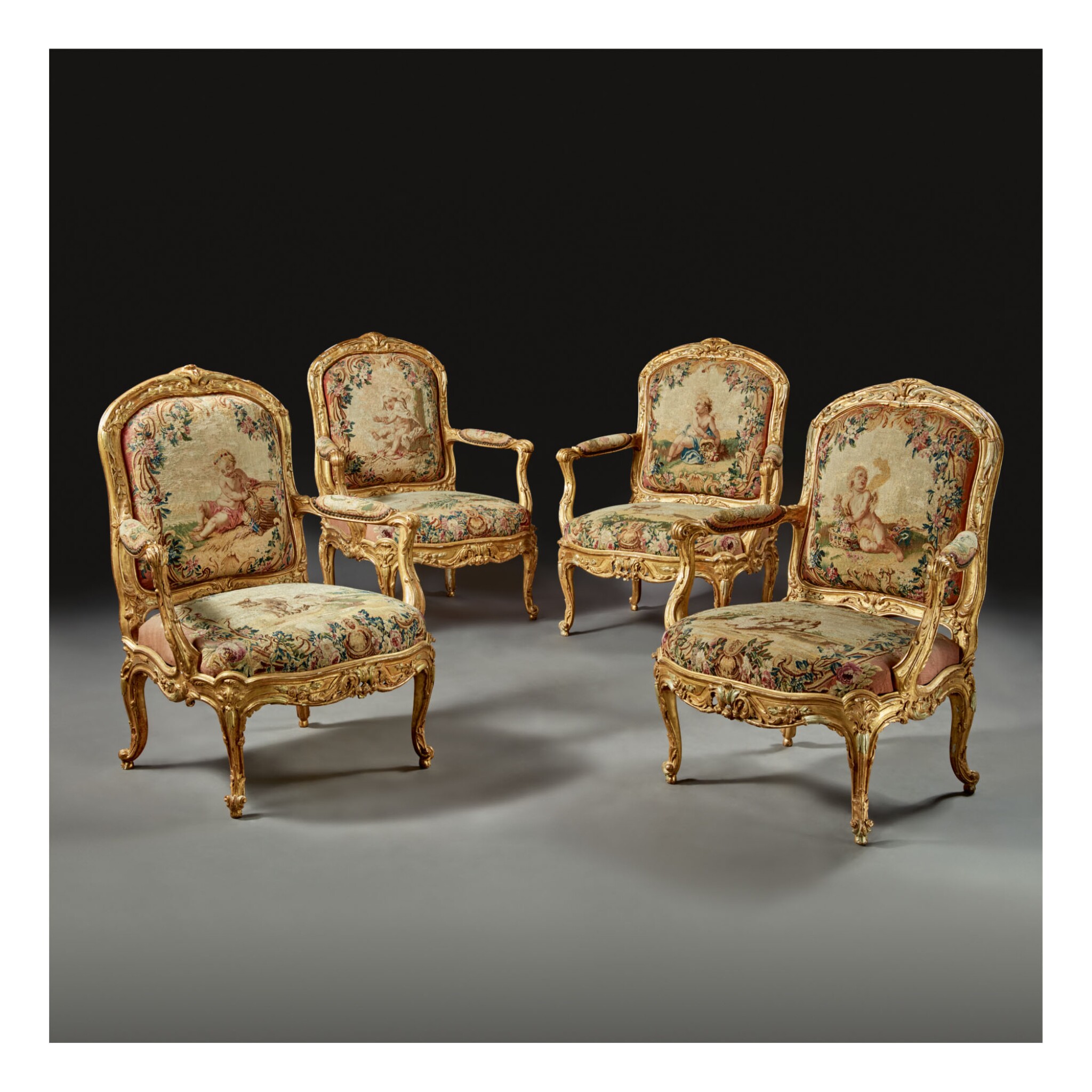 With scattered chips, small losses to carving and gilt surfaces revealing gesso, bole and bare wood in areas as to be expected with age, visible in catalogue photos. Some minor age shrinkage to joints, but chairs are sturdy. One chair lacking screw on lower back rail for chassis frame. Two chairs with old repairs to armrest supports on one arm. Tapestry covering in relatively good condition for its age. Two with patches in seat and generalized wear, particularly on arm rests. And summer chair with small tear to seat. Some tears to satin covering of backs. Later corner blocks to inside of front seat rails. Back seat rails stenciled with numbers 3, 5, 9, and 12 respectively. Extremely high quality carving and attractive two-tone gilding. Sturdy and substantially proportioned.

This magnificent suite (with lots 181-182) represents a pinnacle of the French menuisier's art of the late Louis XV period on the eve of the transition to neoclassicism, and the sculptural quality of the carving and contrast between the two colours of gilding, with the foliate elements highlighted in green tones against a yellow gold ground, creates an effect of magnificence almost unprecedented in Parisian chair design.

When the suite was sold from the Heidelbach collection in 1933, the provenance given was the Princes of Paar collection. Pallot has associated this group with two suites of canapés and fauteuils à la Reine et à chassis acquired by the Banque de France in 1922 which came from the Palais Paar in Vienna (Pallot 1987, p.258-61). The two Banque de France sets (one with a canapé and four fauteuils, the other with a canapé and six fauteuils) and the Zilkha set all have variations to the carving among them, but all three suites share the same overall design of wide seat and back rails à chassis carved with floral and foliate sprays in high relief, and highly sinuous armrest supports twisting outwards. One of the Banque de France sets unusually integrates a pierced acanthus spray in the centre of the crest rail that is paralleled by a similar pierced acanthus shell centering the seat rail on the Zilkha suite. The similarities in construction and composition are such that all three sets must emanate form the same workshop.

In the absence of stamps any attribution can only be speculative, but the quality and bravura of the design points to a leading Parisian maker such as the menuisier du Garde-Meuble du Roi Nicolas-Quinibert Foliot (1706-1776, maître in 1729). The fluidity of the legs and armrests and boldly carved foliate elements are reminiscent of Foliot's exceptional set of two canapés and 12 fauteuils à la Reine et à chassis after a design by the architect Pierre Contant d'Ivry supplied to the Tapestry Room of the Danish Ambassador to Paris Count Bernstoff's palace in Copenhagen in the mid-1750s, now in the Metropolitan Museum (illustrated in Pallot, p.168-69). The design of the Bernstoff suite represents a somewhat pared-down version of the set of fauteuils Foliot provided for Louis XV's daughter Elisabeth de France, Madame Infante at the Court of Parma, also designed by Contant d'Ivry, three of which survive and are now in a private collection, the Metropolitan Museum and the Hermitage (Versailles exhibition, no.22 p.118-19).

Another candidate for authorship could be Nicolas Heurtaut (1720-1771, maître in 1755), who also produced several seminal groups of animated and magistrally carved fauteuils à chassis for important clients in the 1750s, including the Comtesse de Séran, now mainly at Versailles, and the Bishop of Poitiers, now in the Louvre (Pallot 1993, n.23 p.80-83). Another fauteuil by Heurtaut formerly with Jansen employs a pierced scrolled shell on the centre of the seat rail, similar to that on the Zilkha chairs. Such similarities are not conclusive however, and an alternative possibility is that both the Zilkha and Banque de France suites were produced by French menuisiers working in Vienna, adapting Parisian models somewhat to account for local taste.

The Palais Paar was built in 1630 for Johan Christoph von Paar, postmaster general of Austria, at no.30 Wollzeile, Vienna, not far from the Stefansdom. Between 1765 and 1771 his descendent Count (later Prince) Wenzel Johann von Paar commissioned the expatriate French architect Isidor Canevale (1730-1786) to refurbish the Palace's apartments in a late rococo style. His scheme was so well received that the 1792 Vienna travel guide Nützliches Adress und Reisebuch declared, 'The House of Prince Paar…especially deserves to be seen because of the splendour of its interior settings, carried out under the direction of the architect Canevale'.

After the First World War, partially in response to the new republican government's tax policies, the family decided to no longer maintain the palace as a primary residence and began selling or transferring the contents to other properties, including the 18th century boiseries designed by Canevale, which were sold to the Paris decorating firm of Jansen. By the 1930s the building was an empty shell, and its condition deteriorating rapidly, it was eventually pulled down in 1938. In 1963 a portion of the original paneling was acquired by Mr and Mrs Charles Wrightsman for the Metropolitan Museum and now forms part of the Wrightsman Galleries.

Alfred Heidelbach (1851-1922) was a wealthy American financier of German origin, who settled in Paris with his wife Julie, née Picard, in the early 20th century. They commissioned René Sergent, architect of the Nissim de Camondo mansion, to build their private residence at 19 Avenue d'Iéna between 1912 and 1915, considered the last great Parisian hôtel particulier of the Belle Epoque to be constructed. The Hôtel Heidelbach (now an annex of the Musée Guimet) housed the couple's collection of 18th century fine and decorative arts, and the Heidelbachs frequented fellow wealthy collectors and art lovers in Paris including the Camondos. On Alfred's death in 1922 a significant group of French and German porcelain was bequeathed to the Musée des Arts Décoratifs, and the rest of the collection was sold after his widow's passing in 1933.