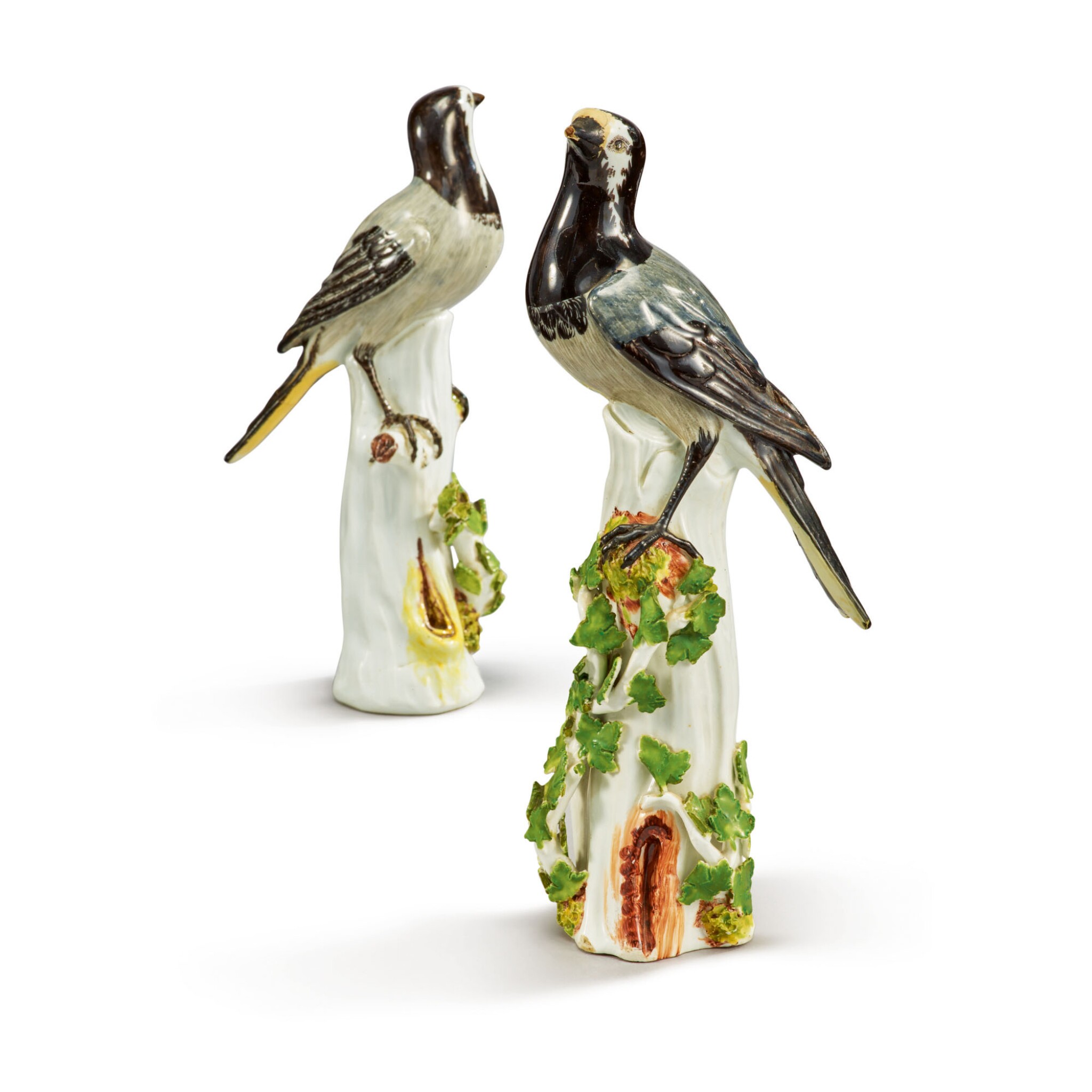 A PAIR OF MEISSEN FIGURES OF PIED WAGTAILS

The Property of a Gentleman, Christie's New York, 16-18 November, 1999, lot 465
Kirchner's work reports list in February 1733: "Eine Bachsteltze auff Einen Baum stizend Lebens größe", [A wagtail seated on a tree life-sized] and according to Samuel Witter, Die Galerie der Mießener Tiere, pp. 316-7, six figures of this model had been delivered to the Japanese Palace by 1735. An example of this original model, which at 10 1/4 inches, 26 cm, high, was somewhat larger than the present version, is illustrated by Carl Albiker, Die Meissner Porzellantiere im 18 Jahrhundert, Berlin 1959 pl. 142. A second example of this larger model, bearing Japanese Palace inventory number N=284W was in the Collection of Sir Gawaine and Lady Baillie and was sold at Sotheby's London, 1 May, 2013, lot 8

In the 1935 edition of the same book Albiker notes on p. 108 that in addition to Kirchner in 1733, a model of a water wagtail was also worked on by Johann Gottlieb Ehder in 1740. This reference, and the presence of impressed numerals on the present examples, indicate that they are probably a slightly later version of Kirchner's original Japanese Palace model, presumably slightly remodelled by Ehder and intended for general sale. A third (and probably slightly later) version also exists with the bird perched on a lower stump, an example of which is in the Untermyer Collection at the Metropolitan Musuem of Art, illustrated in Yvonne Hackenbroch, Meissen and other Continental Porcelain  Faience and Enamel in the Irwin Untermyer Collection, Metropolitan Museum of Art 1956, pl. 7, fig. 20.

Most recently a pair of the same size as the present lot from the Baillie Collection was sold at Sotheby's London, 1 May, 2013, lot 9; A further pair from the Estate of Laurance S. Rockefeller was sold at Sotheby’s New York, 11-12 October, 2005, lot 207.