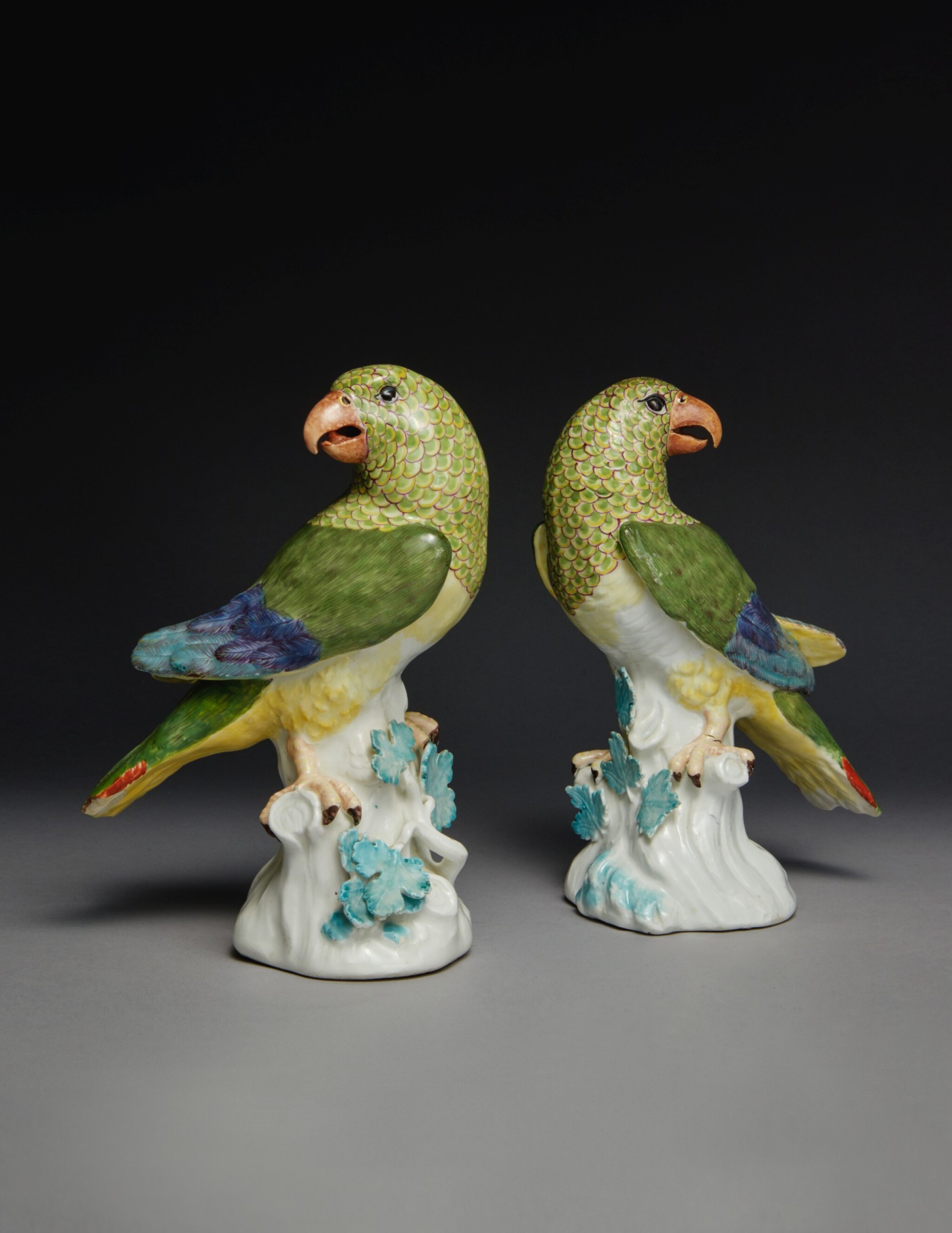 A PAIR OF MEISSEN FIGURES OF PARROTS

each with scale pattern feathers on their necks and green and blue plumage, perched on low stumps applied with pale turquoise leaves, one with crossed swords mark in underglaze-blue

height of tallest 8 in.

Parrots were a symbol of the exotic par excellence and Kändler's models were among the factory's most frequently produced bird figures. Parrots were modelled in different sizes: soon after the life-size parrots for the Japanese Palace, Kändler created, in July 1735, two small parrots (12cm tall). Then, in spite of no further mention in his records, the following pieces are noted in the Dresden stockroom listing of porcelain for Count von Brühl dated July 13, 1737: '1 Pappagey groß / 3 ditto mittle. / 1 D. keiner' [1 parrot large / 1 ditto medium / 1 ditto small] (Gerhard Röbbig, Cabinet Pieces: The Meissen Porcelain Birds of Johann Joachim Kändler, Munich 2008, p. 128.)

In May-October 1740, Kändler modelled new figures of parrots to match the ones already in the warehouse, 'in considerable size', i.e. 19cm:

The lack of description seems to indicate that these birds were a generic type of parrot modelled by Kändler, as opposed to the Indian parrots or cockatoos modelled after life.

A pair of parrots mounted with French Transitional Louis XV/XVI gilt-bronze candelabra, formerly in the collection of Henry Ford II, was sold at Sotheby’s London, A Mansion – A Private Collection, 28 April, 2015, lot 78 (£93,750). Four pairs of these models, painted in varying enamels to depict different species, from the Collection of Sir Gawaine and Lady Baillie were sold at Sotheby’s London, 1 May, 2013, lots 80-83. A particularly close pair with same scale-painting on the head feathers was sold at Christie's Geneva, April 28, 1978, lot 153