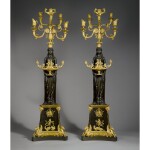 The present candelabra are striking both for their quality and for the originality of their design, with finely modelled female figures and ewer-shaped nozzles. Paired with an exquisite chiselling and gilding applied to an ornamentation imbued with neoclassicism, these candelabra epitomize the casting, chasing and gilding skills attained by French bronziers such as Claude Galle and Pierre-Philippe Thomire, in the early 19th century.

This pair belongs to a group of similar candelabra that appear to have been executed by the same hand, or at the very least after the same model:

- a pair from the collection of Ricardo do Espirito Santo Silva offered at Christie’s London, Classic Art: Antiquity to 20th Century, 29 July 2020, lot 47.

The design for this group displaying a profusion of Empire ornament was evidently inspired by the Antique, popularised in Percier and Fontaine’s Recueil de Décorations Intérieures (1801). For example, the base of these candelabra draws inspiration from plate 69 which features winged horses and a base with masks at each corner, terminating with a chute and a winged animal. Interestingly, an Empire candelabra with identical nozzles in the shape of neoclassical ewers is illustrated in H. Ottomeyer and P. Pröschel, Vergoldete Bronzen, Vol. 1, 1986, p. 392, fig. 5.17.8.

The decorative and qualitative elements of these candelabra may be associated with the work of the celebrated French bronzier, Claude Galle. First, the scale, ingenuity of design, finesse of execution and richness of the gilding relates to a set of four gilt-bronze candelabra sold Sotheby’s London, Treasures, 4 July 2012, lot XXXVIII. The headdresses for example are of the same quality and style as the present pair. Galle’s work is also no stranger to palmettes and finely stylised acanthus leaves issued from branches, as displayed on numerous ewers attributed to Galle, for example, H. Ottomeyer and P. Pröschel, op.cit., Vol. 1, 1986, p. 392, figs. 5.12.6 and 5.12.9. Finely chiselled foliate scrolls and tripartite palmettes are distinguished on a pair of candelabra attributed to Galle, sold Christie’s London, The Exceptional Sale, 10 July 2014, lot 8. Winged horses and the figures held in the hands of the female figure are related to those on a pair of ewers attributed to Galle and offered at Christie’s New York, The Exceptional Sale, 28 April 2017, lot 20.