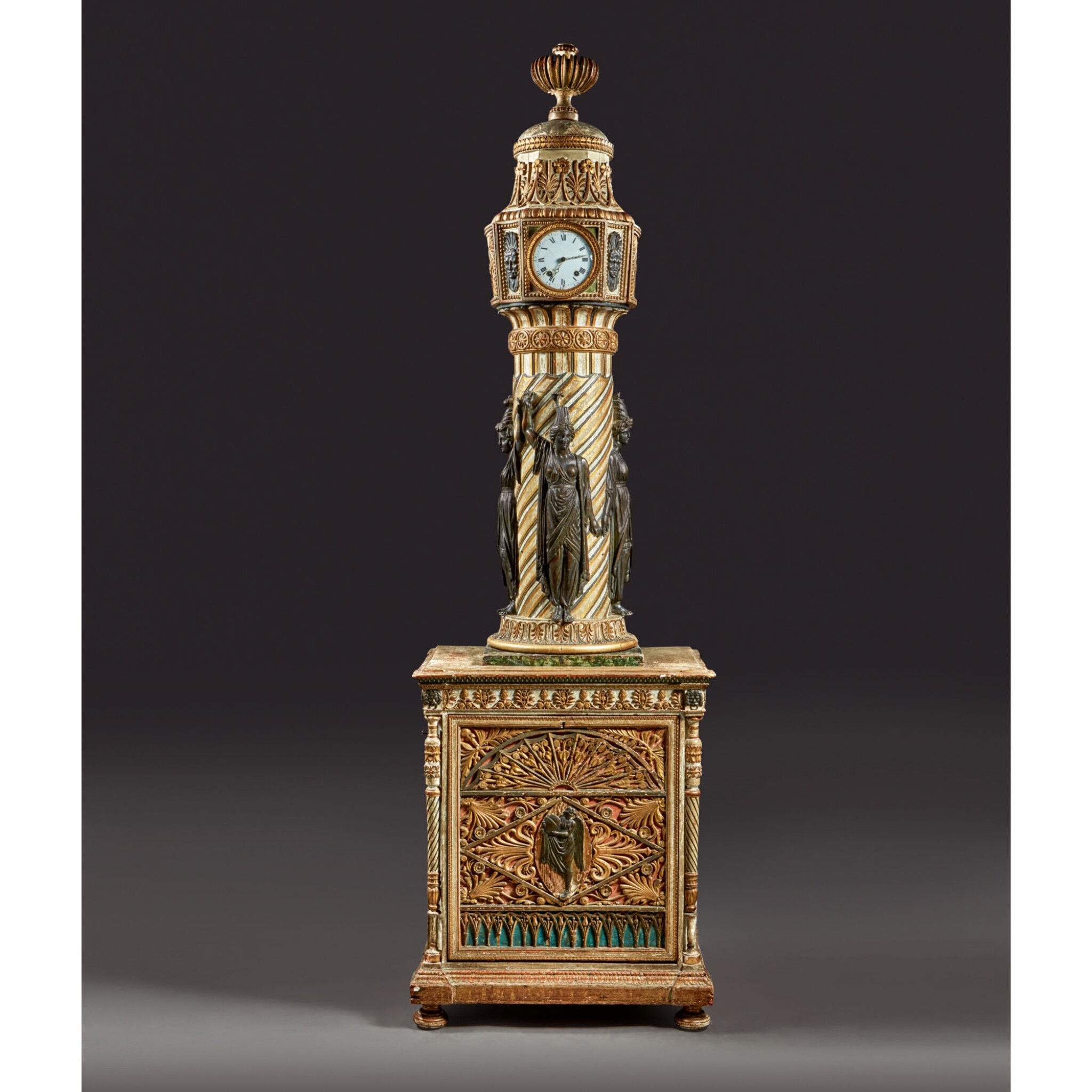 in the form of a monumental column and finial fitted with a clock above a rectangular pedestal base containing a barrel organ movement with wooden pipes; the clock movement anchor escapement with 19th-century converted steel suspension and 19th century pendulum, quarter-striking on two bells with vertical striking hammers to the side; unsigned

﻿"In response to your inquiry, we are pleased to provide you with a general report of the condition of the property described above. All dimensions in catalogue descriptions are approximate. Condition reports may not specify mechanical replacements or imperfections to the movement, case, dial, pendulum, separate base(s) or dome. Watches in water-resistant cases have been opened to examine movements but no warranties are made that the watches are currently water-resistant. Please note that we do not guarantee the authenticity of any individual component parts, such as wheels, hands, crowns, crystals, screws, bracelets and leather bands, since subsequent repairs and restoration work may have resulted in the replacement of original parts. Since we are not professional conservators or restorers, we urge you to consult with a restorer or conservator of your choice who will be better able to provide a detailed, professional report. Prospective buyers should inspect each lot to satisfy themselves as to condition and must understand that any statement made by Sotheby's is merely a subjective, qualified opinion. Prospective buyers should also refer to any Important Notices regarding this sale, which are printed in the Sale Catalogue. In particular, please note it is the purchaser's responsibility to comply with any applicable import and export matters, particularly in relation to lots incorporating materials from endangered species. NOTWITHSTANDING THIS REPORT OR ANY DISCUSSIONS CONCERNING A LOT, ALL LOTS ARE OFFERED AND SOLD AS IS" IN ACCORDANCE WITH THE CONDITIONS OF BUSINESS PRINTED IN THE SALE CATALOGUE."

The late 18th century was a golden age for the development of the tall case musical clock, fitted with bellows-driven wooden pipe organs. These were particularly favoured in German-speaking territories, and important makers included Peter Bofenschen in Hanover, Heinrich Rauschenplatt in Göttingen, and the court clockmaker Christian Ernst Kleemeyer in Berlin. Clockwork and organ manufacturers often worked with preeminent cabinetmakers to produce elaborate architectonic cases, such as Peter Kinzing in Neuwied who partnered with his neighbour David Roentgen and was named horloger de la Reine by Marie-Antoinette, and in Stockholm Pehr Strand provided movements for cases made by the leading woodcarver and mirror-maker Pehr Ljung in the latest Gustavian taste. Referred to as Flötenuhren (flute clocks), these timepieces were sometimes the result of a collaboration with important composers of the day. At the Esterhazy palace, Franz Joseph Haydn wrote several pieces for organ clocks created by the court librarian Father Primitivus Niemecz (1750-1806), one of which is now in the Speelklok Museum in Utrecht, and Beethoven was persuaded by his friend Johann Nepomuk Maelzel, inventor of the metronome, to write his Wellington’s Victory symphony originally as a musical clock version that was manufactured as a secretaire by the Viennese clockmaker Franz Egidius Arzt, formerly with Pelham Galleries, London and Paris.

The richly carved neoclassical details of this case, which retains much of its old polychrome surface decoration, is particularly noteworthy for the presence of the four elegant female figures wearing Levantine headdresses, indicating the clock would have originally stood in a salon turc. European fascination with all things Turkish had been growing throughout the 18th century, following the defeat of the Ottoman armies at the Siege of Vienna in 1683 that definitively eliminated the military threat to the West posed by the Sublime Porte. Attention was now directed towards the colourful and richly decorated interiors and costumes of the Ottoman Empire, which became part of a broader interest in exoticism during the Rococo period, and Turkish scenes and figures in Turkish costume began appearing in paintings, wall decoration, porcelain and goldsmiths' work alongside Chinoiserie and singerie themes.

The appeal of what Lady Mary Wortley Montagu described as 'the refinements of an indolent voluptuousness' continued well into the final decades of the 18th century, particularly in France, where the King's brother the Comte d'Artois commissioned a cabinet turc in his Paris residence the Palais du Temple in 1776, with luxuriously upholstered seat furniture supplied by Georges Jacob. This prompted a sort of design competition with his sister-in-law Queen Marie-Antoinette, who promptly commissioned her own boudoir turc at Fontainebleau the following year, designed by the architect Richard Mique with boiseries decorated by the Rousseau brothers. Both would then install further Turkish salons at Versailles, setting off a trend among the late Ancien Regime aristocracy.

The fashion for all things à la turque also extended to music, influenced by the distinctive percussion used by Turkish Janissary military bands, which had become very popular throughout Central and Eastern Europe. Many of the era's major composers integrated 'Turkish' elements into their works, for example Haydn in his Military Symphony, Mozart's opera Die Entführung aus dem Serail, and perhaps most famously Beethoven in his Ninth Symphony. Such music was ideally suited for a clock intended for a Turkish Room, like the offered lot.