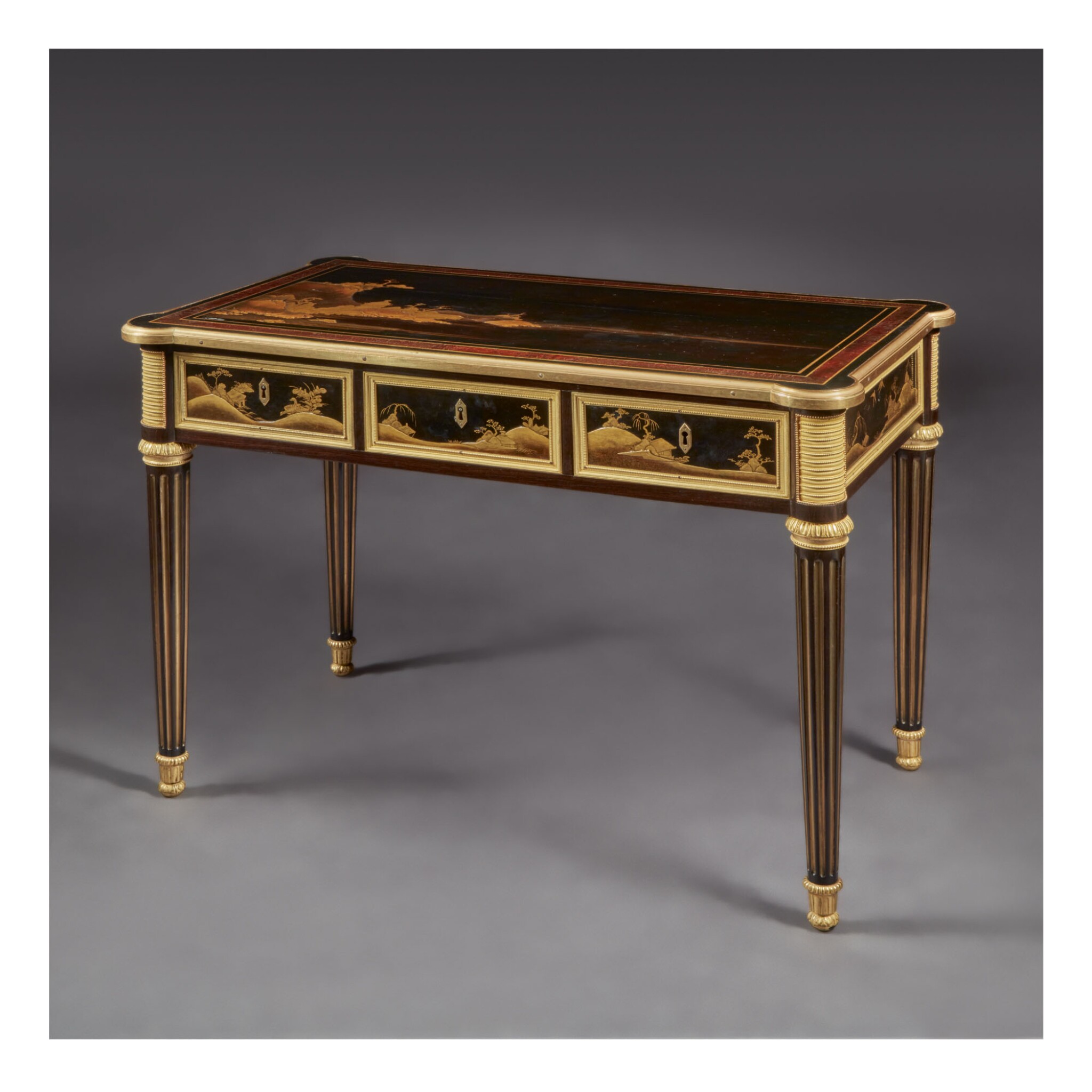 In very good condition overall, with typical scattered age cracks and minor losses and patches to veneer, and some rubbing and marks to gilding. A few minor areas of abrasions, marks and small scratches to lacquer surfaces; the top with a small loss in lower left corner, horizontal age cracks, and craquelure to the aventurine border, all visible in catalogue photograph. Bronze borders of drawers with a few small indentations. Side lacquer panels adapted from a Japanese cabinet, with plugged holes from previous drawer handles.

Almost certainly designed to be placed in the centre of a room, our table boasts Japanese lacquer panels to the top, front, sides and rear, affording the viewer the opportunity to admire it in the round. The restrained, elegant rectilinear form, strong architectural features, with a balanced use of precious takamakie Japanese lacquer panels and sumptuous gilt-bronze mounts, allows for a striking effect and displays all the hallmarks of Etienne Levasseur’s oeuvre. This same harmonious interaction between the form of the piece and the extraordinary materials used is also seen on a commode stamped Levasseur, formerly in the collection of the Earl of Rosebery at Mentmore, sold Sotheby’s Monaco, 3 July 1993, lot 160 and more recently, on a pair of Louis XVI gilt-bronze mounted Japanese lacquer and ebony commodes à vantaux, attributed to Etienne Levasseur, late 18th century, the lacquer panels 17th century, sold Sotheby’s London, Treasures, 6 July 2016, Lot 30 (Fig. 1).

Considered one of the important cabinetmakers of his time, Etienne Levasseur received Master in 1766. Highly skilled, he became an adjudicator for his guild in 1782 and in 1785 and 1789 he supplied furniture for the Garde-Meuble Royal. Levasseur started his career as an ouvrier privilégié in the rue Faubourg-Saint-Antoine and worked almost exclusively for the marchands-merciers, producing luxury furniture using precious materials like mahogany, Japanese lacquer and Boulle marquetry. It is believed that he was apprenticed to one of André-Charles Boulle's sons and this influence is evident in the successful way he restored and manufactured pieces of Boulle marquetry furniture, as well as his use of strong architectural form as seen on a pair of lacquer cabinets stamped Levasseur from the Randon de Boisset collection (see Pradère, fig.57, p.315), later part of the collection of Alexander, 10th Duke of Hamilton and sold Sotheby’s New York, The Jaime Ortiz-Patiño Collection, 20 May 1992, lot 85.

The collaboration between the cabinetmaker and the decorative arts dealer provided an important component in achieving numerous high-profile commissions and the setting of new trends. Essentially, the marchands-mercier were entrepreneurial dealers and interior decorators who specialized in luxury goods and furniture. Towards the middle of the 18th century, when the vogue for exoticism expressed itself, a small, important group of marchands-merciers specialised in works of art catering to an elite circle of connoisseurs and collectors, some of whom chose to display their lacquer pieces in dedicated rooms, resplendently decorated in the oriental taste. The marchands-mercier helped guide and create fashionable interiors. The landscape panels on our centre table were most certainly supplied to Levasseur by a marchand-mercier. It is known that he collaborated closely with Claude-François Julliot, particularly with Boulle marquetry, but a few other marchands-mercier to mention were Martin-Eloi Lignereux, Dominique Daguerre, Lazare Duvaux and Simon-Philippe Poirier.

THE TASTE FOR JAPANESE LACQUER

During the late 16th century, the Portuguese were instrumental in importing lacquer into Europe and in 1686, the taste for lacquer flourished after the King of Siam sent an Embassy to the court of Louis XIV at Versailles. Japanese lacquer became particularly rare in France when the Dutch replaced the Portuguese as the main importers, this due to their privileged trading position with Japan. Japanese lacquer was treasured for its innate beauty, unrivalled craftsmanship and rarity. Furniture incorporating Japanese lacquer was thus exceptionally rare and collectors spent vast sums obtaining them. The panels were obtained by dismantling screens and trunks that had been exported to Europe and which were then transformed into luxury pieces by the leading ébénistes and bronziers of the day, before being sold on by the marchand-merciers to an elite clientele desperate to acquire the latest fashion. The demand for Japanese lacquer continued well into the reign of Louis XVI and beyond.