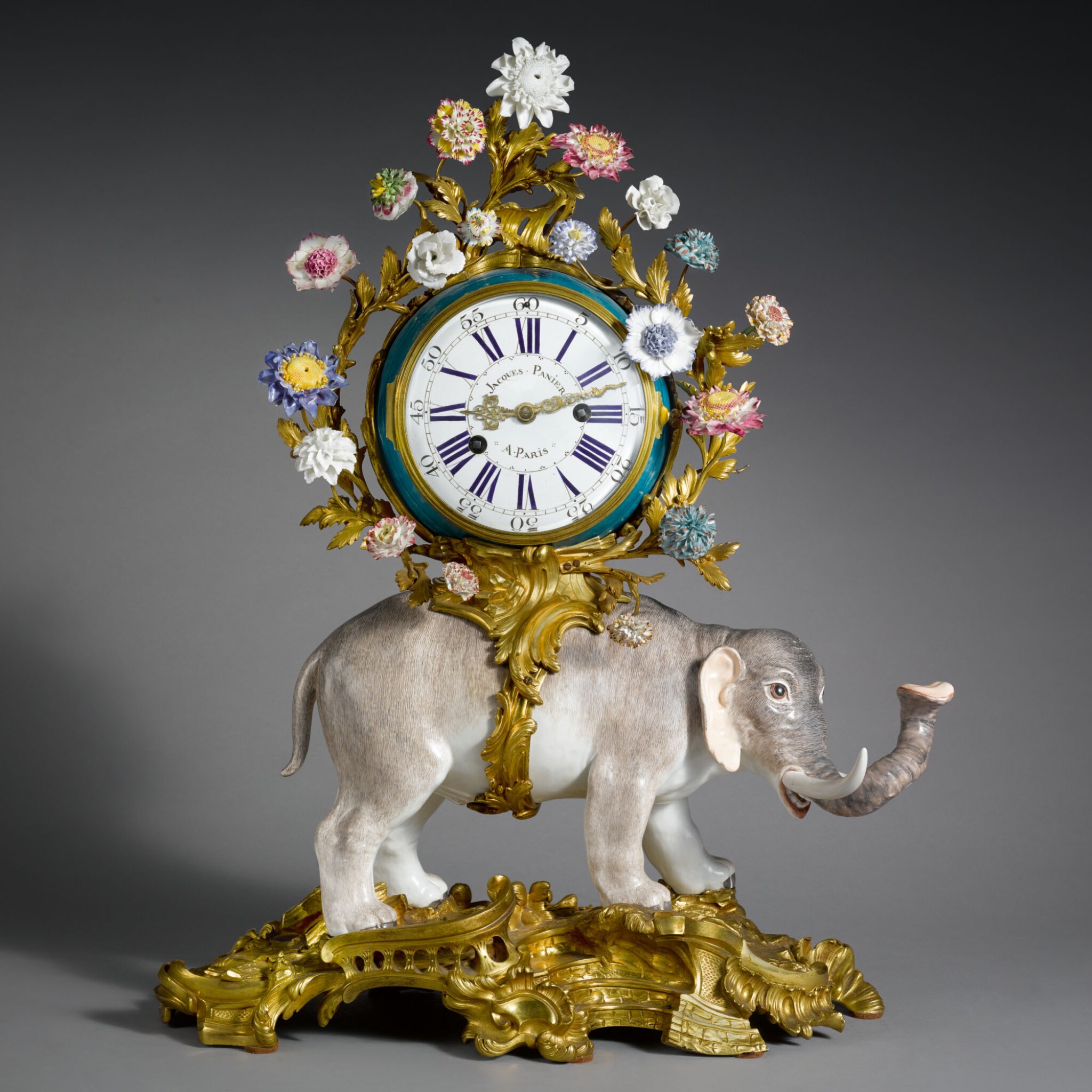 The porcelain; overall in good appearance and generally good condition.. In detail: the porcelain flowers all loose, some with typical minor scattered chips to edges of petals. Some probably replacements. The blue flower at nine o'clock with two restored small petals. The white and puce flower above, broken and repaired. The blue and white flower at 2 o'clock with some probable restoration. The elephant with traces of spray to the central part of its body to the front, on either side of the bronze brace, which extends partially to the upper part of the proper right front leg. There appears to be no restoration to the reverse of the model. It is difficult to determine extent of any damage present but would appear to be minor. To the head there are traces of restoration to the underside of its mouth. The proper right tusk a later resin replacement, with an old repaired break. The proper left tusk in good condition. There are traces of restoration to trunk, but it appears to be intact. The gilt bronze; with some minor surface scratches, casting flaws, and rubbing, as to be expected.

This impressive clock is virtually identical to one formerly in the Riahi Collection with a movement by Furet, sold Christie's London 6 December 2012, lot 21 (now in the Halim Time & Glass Museum, Evanston, IL). The Riahi example lacks the gilt bronze garlands set with porcelain flowers around the drum and has a less elaborate girth strap, and the trunk and feet are decorated with slightly different colouring. The scale of the elephant is exceptional for 18th-century Meissen elephants, and apart from these two clocks only one other elephant of this size is recorded, an unmounted version sold Christie's Paris, 28 November 2019, lot 392.

The model is attributed to Peter Reinicke (1715-68), one of Johann Joachim Kändler's pupils and assistants, based on a 1743 Meissen factory reference to a figural group of a caparisoned elephant bearing a sultan on its back and a mahout in front, the elephant designed by Reinicke and the figures by Kändler. This elephant is smaller in size than the offered lot but very comparable in form, and the model was popular in the 18th century, as evidenced in an October 1753 inventory of Count Brühl's collection that lists twelve small Meissen model elephants, five elephants 'mit Thürmen' (with castle towers) and eighteen elephants without. The model was also exported to Paris by the marchands merciers who added gilt bronze mounts, seen for example on a version of the sultan riding an elephant now in the Detroit Institute of Arts (2004.11).

Elephants of the standard Reinicke elephant model were infrequently used for clocks, however, and only a few examples are documented: one at Waddesdon Manor (G. de Bellaigue, The James A. de Rothschild Collection at Waddesdon Manor, London 1974, vol.I, no.16), another in the Rijksmuseum.Amsterdam (illustrated in J.-D. Augarde, Les Ouvriers du Temps, Geneva 1996, p.383 fig.279) and a further clock from the H.J. Joel Collection sold Christie's London, 17 April 1980, lot 100.

Clocks with elephants in the medium of patinated or gilt bronze were much more favoured in the eighteenth century and survive in far greater numbers. The standard model was with the trunk raised, thought to be based on Japanese Kakiemon porcelain examples that began arriving in Europe in the late 17th century, such a pair now at Burghley House (O. Impey, Porcelain for Palaces, The Fashion for Japan in Europe, 1650-1750, London 1990, p.178, no.160). This model is usually associated with the bronzier Jean-Joseph de Saint Germain (1719-1791), and elephant clocks signed by or attributed to him include appear periodically on the market, including one sold Sotheby's Paris 5 November 2014, lot 195. XRF testing of the base of the Zilkha clock suggests it was manufactured in the 19th century, probably as a replacement. The model is one used as a base by Saint-Germain on several recorded clocks, including a signed pendule aux deux Chinois illustrated in Kjellberg, p 123, fig.D.