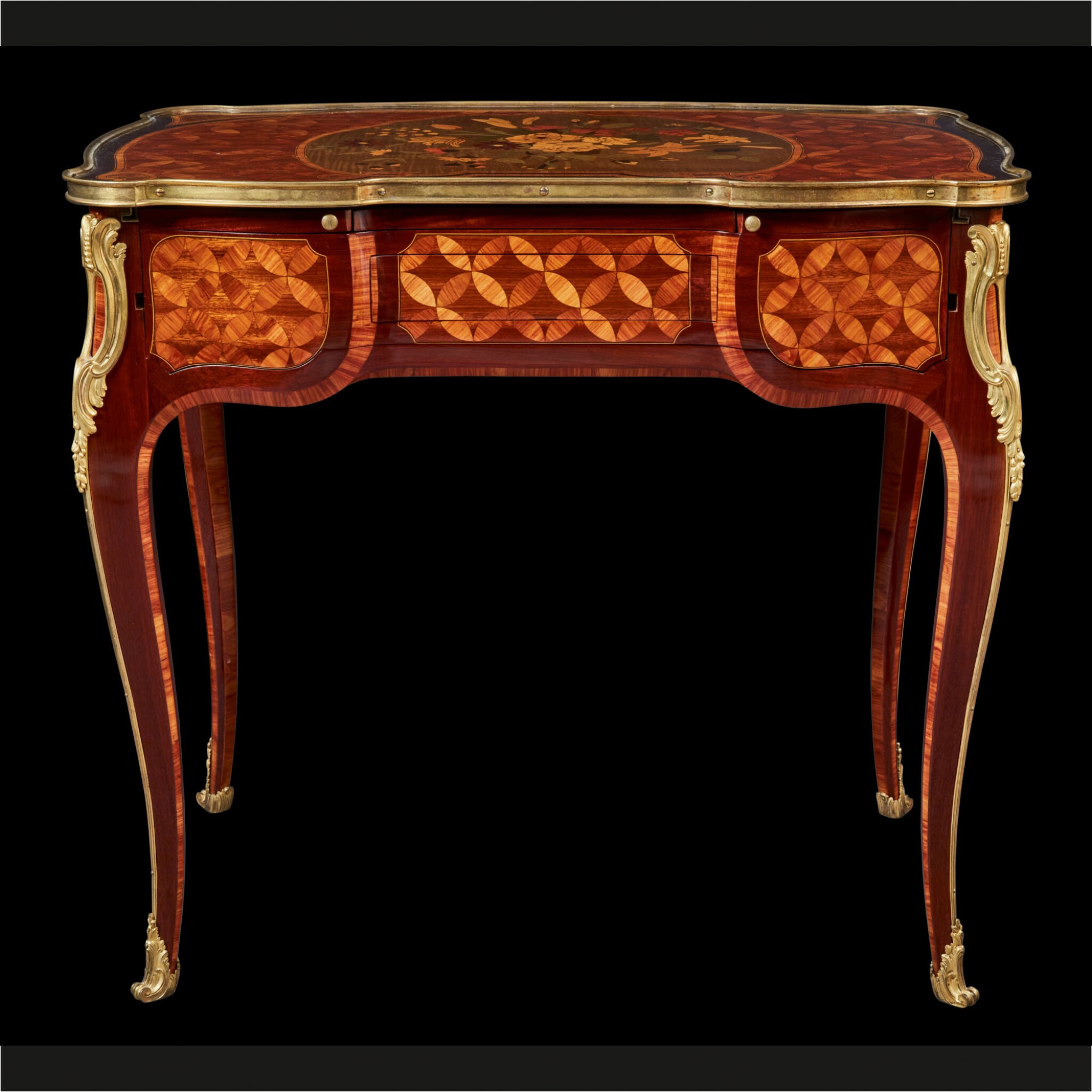 This magnificent table à écrire epitomizes the flawless quality French ébénistes such as Roger van der Cruse dit Lacroix (1728-1799) produced during the middle of the 18th century. Lacroix’s talent and mastery of the marquetry and parquetry techniques are evident in the present example, as well as his acumen for well-proportioned and elegant designs where fluidity and the purity of line prevail.

This model belongs to a group of tables à écrire executed by Lacroix, circa 1750 and is derived from the mechanical tables à écrire that Jean-François Oeben (1721-1763) created in the 1750s, notably one for Madame de Pompadour in the collections of the Louvre Museum (inv. no. OA10404). Privileged cabinetmaker to the Crown, Oeben specialized in the manufacture of mechanical furniture equipped with ingenious systems which combined several functions. As with Oeben’s examples, once the mechanism is in motion, it simultaneously moves the top back to reveal a larger drawer fitted with a writing surface, a small drawer and two lateral compartments.

Roger Vandercruse was an influential ébéniste during the 18th century, whose talent contributed to the Louis XV/Louis XVI transitional style and the Louis XVI style in the second half of the 18th century. With Flemish origins, Lacroix was born in Paris in the burgeoning Faubourg Saint-Antoine where his father François was already established as an ouvrier libre. Lacroix was related to all the important ébénistes of his time: his eldest sister first married the ébéniste Jean-François Oeben, then Jean-Henri Riesener. Two of his other sisters married respectively Simon Oeben and Simon Guillaume, both ébénistes, and another sister married the ciseleur André Ravrio. In 1750, Lacroix married Marie-Jeanne Proguin and thus became brother-in-law to two ébénistes, Pierre Pioniez and Jean Marchand. He was also friendly with Pierre II Migeon and Martin Carlin, whose wedding he attended and appeared as a witness. In 1755, probably upon his father’s death, Lacroix took over the workshop in the rue du Faubourg Saint Antoine. Given his brilliant skills and the quality of his marquetry and parquetry work, Lacroix enjoyed great success and was in demand, including from the Royal Court.