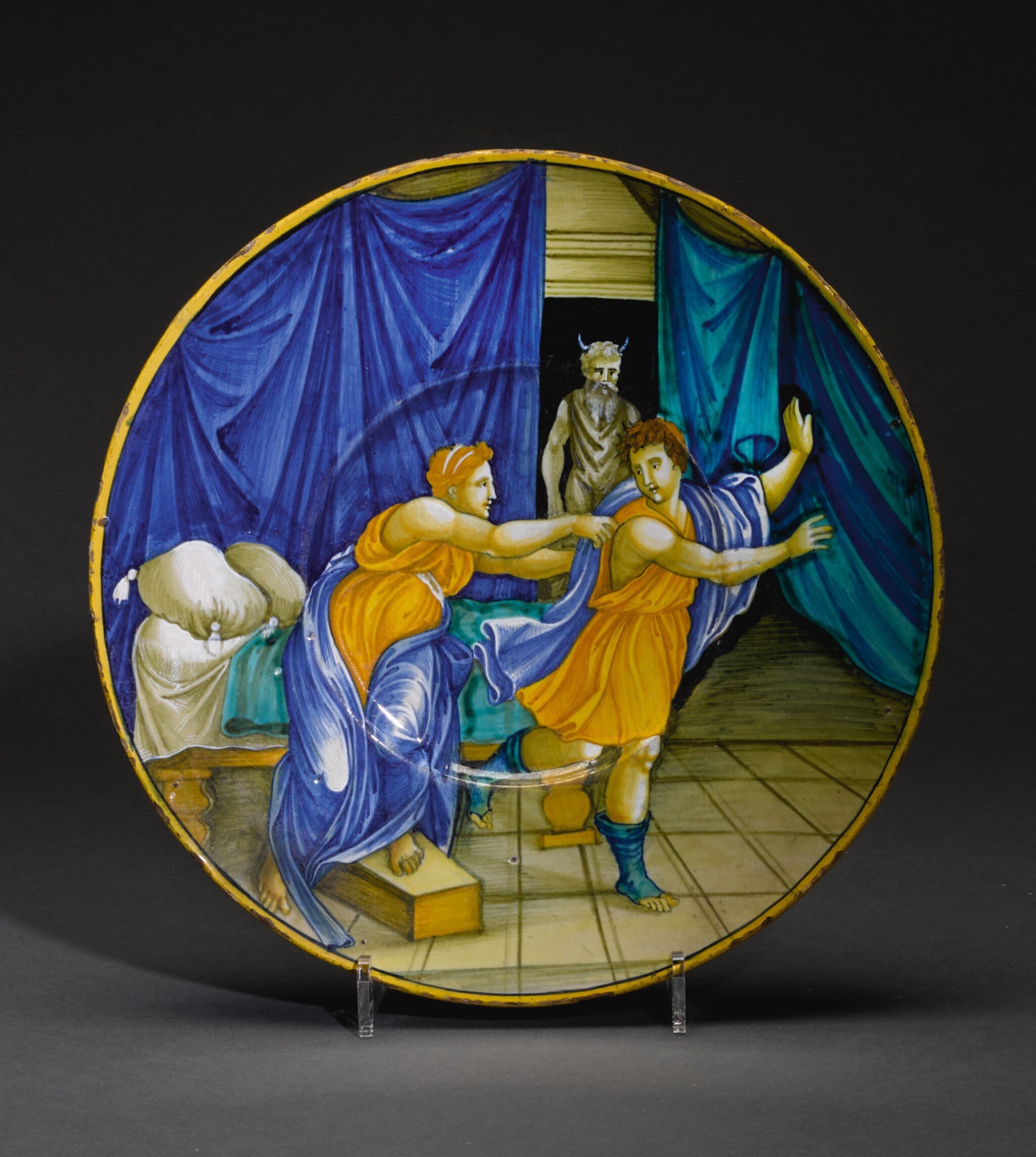 painted with Jospeh and the Wife of Potiphar, set in a draped interior with Potiphar's wife seated on a bed grasping the cloak of the fleeing Joseph, before a curtain parted to reveal a satyr herm, below an ochre band rim, the glazed underside with concentric ochre circles

Overall in good order with no restoration, well painted in a bold palette. This report will described the very minor defects in detail which are typical of this ceramic body; overall the condition is good given the age of the piece and the fragility of the body. All defects described are visible in the catalogue and on-line images.

The rim of this plate has glaze chipping and flaking, typical of tin-glazed earthenwares which exposes the buff-coloured body below. Over time these have become filled with dirt. The glaze to the back of the plate has two faint surface cracks across the footrim at 11 and 5 o'clock and are about 9 and 11 cm. long, the upper left surface crack forks at the terminal (these do not go through the body). There is a scratch to the surface of the plate to the border at six o'clock which slants and is about 3.5 cm. long but is barely visible and could be imporved by cleaning, there are scattered very minor surface scratches, probably from stacking rather than use. There is minute glaze chipping to the well of the plate at about 8 o'clock in the blue drapery on Potiphar's wife's right hip and another even smaller glaze flake to the cheek of the idol and to the edge of the well at about 1 o'clock with further minute glaze flakes to the well to the right of Joseph's head . The glaze to the lower part of the compositing on the upper surface has some scattered pitting from the time of manufacture and these are some typical minor glaze pools and flaws to the surface, none of which detract from the overal piece and are part of the firing.

This scene is likely to have been taken from an engraving by Marcantonio Raimondi after a design by Raphael for the seventh bay of Vatican Loggia depicting episodes from the life of Joseph.  The scene captures the moment when Joseph, the steward of the household of Potiphar, rejects the advances of his master's wife. Joseph, having been sold into slavery by his jealous brothers, was taken to Egypt by Ishmaelite traders where he was sold to Potiphar, captain of Pharaoh's guard.  The youthful and handsome Joseph attracted the attention of Potiphar's wife, who is unnamed in the Old Testament; she made advances to him which Joseph rebuffed. One day, whilst alone in his lady's chamber, she again attempted to seduce him and, in his effort to flee, his cloak was torn from him and this would become the instrument of his undoing. His spurned mistress accused Joseph of attempting to violate her, using the cloak as evidence which led to Joseph's imprisonment.

Representations of stories from the dramatic life of Joseph were popular in the Christian Church, partially because they prefigure episodes in the life of Christ. Hence the proliferation of illustrations of these stories both in painting, fresco, sculpture and in the applied arts.  Like the story of Susanna and the Elders, the relatively minor episode of Potiphar's Wife is a popular choice among artists who wish to illustrate a strong moral tale but also represent the female nude. Raphael's bold but chaste design is a counterpoint to the more salacious Ovidian mythological scenes which were popular amongst maiolica painters.

The maiolica painters of the period would work very closely together, often emulating the style of the workshop maestro and frequently collaborating on services and even on single pieces. Some istoriato pieces were signed by their author in full or in monogram, dated or inscribed to the reverse which can provide a chronology and a stylistic comparison to unsigned pieces (which form most surviving wares). The authorship of the present plate is a matter of debate; it bears similarities to the later work of Nicola di Gabriele Sbraghe, known as Nicola da Urbino. The warmer flesh tones and close adherence to the graphic source is notable in Nicola's attributed work of about 1528 onwards, in contrast to the blue tones of his earlier work in the 1520s and his more imaginative compositions based on earlier Venetian woodcuts (1) from Ovidio methamorphoseos vulgare, 1497. The present plate copies Marcantonio's engraving very closely with relatively little alteration to the original in order to adapt it to a circular form. The dramatic skies, expansive landscapes, architectural details typical of the work of Nicola and his followers is not used in this composition. It is interesting to compare the treatment of the this subject from the same source with three similar items where the painters have adapted the scene more freely: a lustred armorial footed dish, inscribed to the underside and with the monogram 'S' attributed to Sforza di Marcantonio in the Victoria & Albert Museum, London (2) , another similar dated 1538 by Xanto, similarly titled and signed with the monogram `X' in the collection of the Louvre, Paris (3) and another in the Robert Lehman Collection in the Metropolitan Museum, New York (4). The subject also appears on a bowl, formerly in the William Ridout collection (5). The subject also appears in a later woodcut by Salomon Bernard to illustrate Genesis Chapter 39 in the Lyons Bible published by Jean de Tournes in 1553 and was copied on to a maiolica plate attributed to a French maker in the Wallace Collection (6) and on an armorial flask and stopper attributed to the Fontana workshop (7).

Viktor Wendelstadt (1819–1884) was a successful banker from Cologne, who in 1848 became the director of the Cologne-based Schaaffhausen’sche Bankverein, the bank association which was the first joint stock company legally recognised as a bank in Germany. From 1856, Viktor and his wife Amelie, née Deichmann, lived in La Redoute in Bonn. Built between 1790 and 1792 and commissioned by Archduke Maximilian Francis of Austria, Elector of Cologne, this neo-classicist palace was initially intended for costume balls and other occasions for members of the court, and Ludwig van Beethoven and Joseph Haydn performed there in 1792. When the French occupied Bonn in 1794, the Archduke was forced to flee, and the cultural events for which La Redoute had become famous during a short period of time became a thing of the past, until Amelie and Viktor Wendelstadt revived its former spirit as a cultural centre by hosting the great composers and pianists of their time, such as Johannes Brahms (1833-1897) or Clara Schumann (1819-1896) (see Die Geschichte der Familie Wendelstadt, Gregor Berghausen, Cologne, 2000).

(1) Wilson, T. Ceramic Art of the Italian Renaissance, London, 1987, p. 44 where the author discusses the timeline of signed works by Nicola.