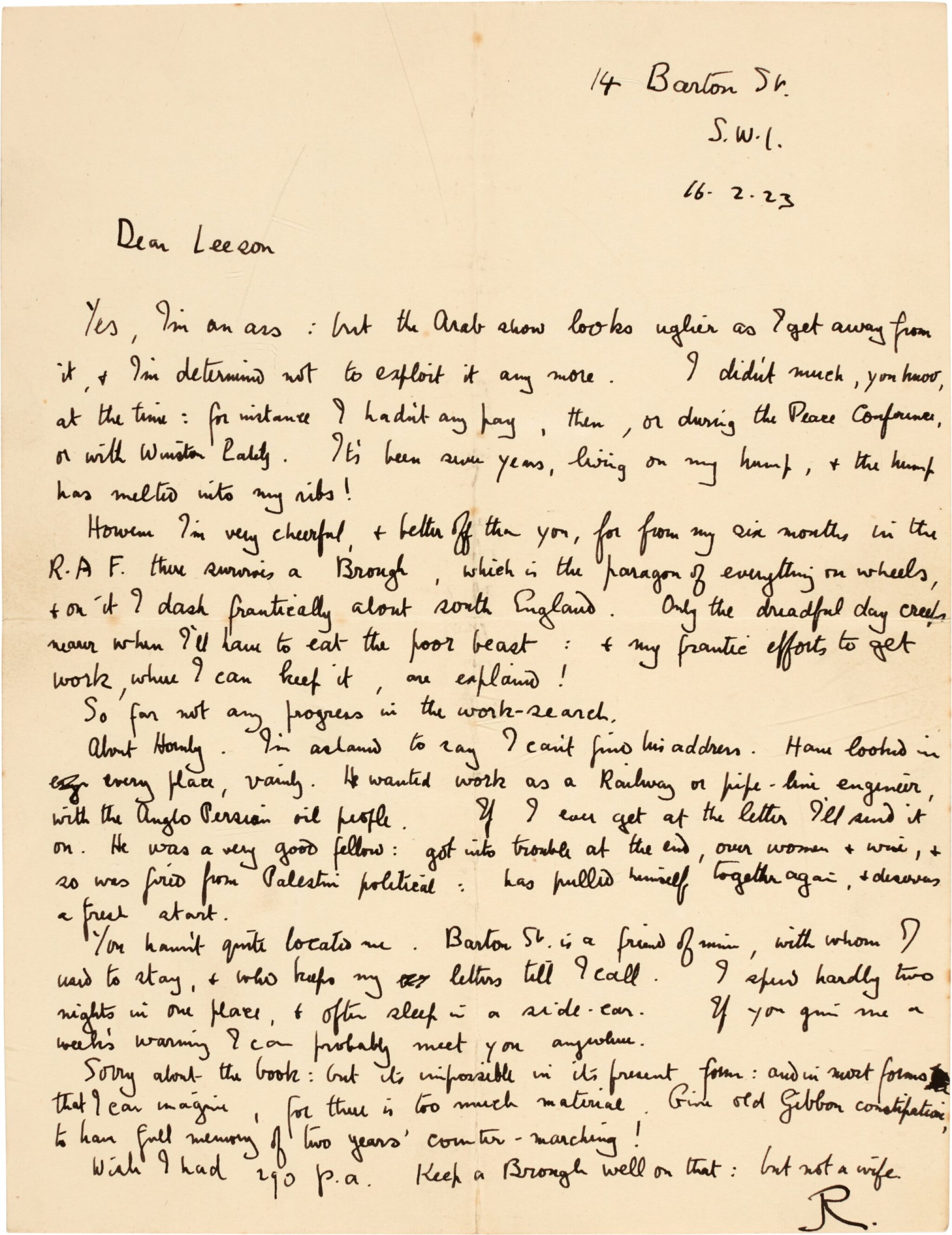 explaining his refusal to publish Seven Pillars ("...Sorry about the book: but it's impossible in its present form: and in most forms that I can imagine, for there is too much material...") and his wish to leave behind his Arab experiences, complaining of his poverty and eulogising his motorcycle ("...from my six months in the RAF there survives a Brough, which is the paragon of everything on wheels, & on it I dash frantically about south England..."), also discussing the post-war fortunes of Captain Hornby, another comrade in arms, 1 page, 4to, 14 Barton Street, London, 16 February 1923

"...Yes, I'm an ass: but the Arab show looks uglier as I get away from it, & I'm determined not to exploit it any more. I didn't much, you know, at the time: for instance I hadn't any pay, then, or during the Peace Conference, or with Winston [Churchill] lately. It's been seven years, living on my hump, & the hump has melted into my ribs..."

LAWRENCE ON HIS WISH TO BREAK WITH HIS PAST IN ARABIA. Lawrence had renewed contact with B.E. Leeson earlier in February 1923 (see previous lot) and here, no doubt responding to a comment in Leeson's reply to his last letter, he expresses his clear wish to keep Seven Pillar of Wisdom from publication and to move on from his adventures in Arabia. This letter has an unusual signature, "R.", as it was written during the brief period when Lawrence assumed the name John Hume Ross.

B.E. Leeson was a veteran of the Arab Revolt. He had joined 14 Squadron of the RFC in January 1917 as an Observer with the rank of Lieutenant. The squadron was then providing aerial support to Arab and British forces from Rabigh, north of Mecca in the Hejaz, and later from Wejh. Leeson's personal connection with Lawrence came in late April, when the two men had been part of a small group who spent a week exploring a remote valley, Wadi Hamdh, to recover a crashed B.E.2c biplane. The temperature was 118° in the shade, the country was waterless, and their car constantly had to be cut free of thick dry brushwood. Leeson was subsequently invalided out of Arabia.

This letter is previously unpublished.

Condition is described in the main body of the cataloguing, where appropriat