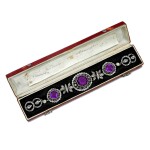 Central amethyst measures approximately 17.1 x 17.2 x 9.3mm, calculated to weigh 16.61 carats, side amethysts measure approximately 12.4 x 12.2 x 7.5mm, calculated to weigh 6.89 carats; and 12.0 x 12.2 x 7.2mm, calculated to weigh 6.40 carats, all in good condition. Estimated total diamond weight approximately 9.00-11.00 carats, two small rose diamonds deficient. Each element of the necklace detaches, the two smaller amethyst sections could potentially be worn as earrings (if fittings were made for them). Leaf links with traces of lead solder to reverse, both are articulated although one more so than the other. Length of necklace without back chain approximately 220mm. Overall condition good. Inscription on the base of the original box reads: Dieses Fermoir schenkte Kaiser Alexander I in Kockenhusen Frau von Loewenstern geb. Gräfin Manteuffel 1822

The present lot was one of two necklaces given by Tsar Alexandar I of Russia to his hostesses following his stay in 1822 at Schloss Kokenhusen, the home of Otto von Löwenstern and his wife Elizabeth, situated on the bank of the river Düna below the ruins of the medieval Kokenhusen Castle. Otto's sister, Sofie von Löwenstern and her husband Franz Gabriel Count de Bray were also guests - and it was really de Bray's presence that warranted the visit. Count de Bray had a distinguished career as a diplomat - he was sent as 'Legationsrat’ by the Bavarian Elector to St Petersburg in 1798 where he met with Tsar Alexander's father and predecessor, Paul I, and was successful in negotiations regarding the Order of Malta, as well as being appointed Bavarian envoy to Berlin (1801-1808) and later the Bavarian envoy to St Petersburg in 1808 where he befriended the Tsar, who promised to visit him in Kokenhusen one day.

The Tsar's visit was announced at fairly short notice, and details of the visit amusingly described how the house was sprayed with 'English honey' (his favourite perfume), with mini canons lined up for the salute and decorated with garlands of flowers. After the Tsar left, the two jewel cases were found in his room with a handwritten note detailing who they should go to, along with instructions to distribute 1000 roubles amongst the staff. A translation from the de Bray's archives discussing the Tsar's visit describes the event - "Soon I was summoned to be given a superb diamond and amethyst necklace, with another for my sister-in law, which came from the Emperor's [private] cabinet, each with a label written in his own hand, one 'for Md. La Comtesse de Bray', the other to 'Md. De Lowenstern'. More than a thousand roubles were distributed to the staff and a watch for Pierre. It is much too generous and I almost regret it. May the heavens bless the Emperor!"

Siberian amethysts are considered the finest in the world, due to their rich deep, purple body colour, accented with flashes of red and blue. A comparable example can be seen in the Londonderry Amethysts - which had also been a gift from the Tsar, just the year before in 1821 in Vienna. The story goes that Tsar Alexander became quite enamoured with Lady Frances Anne Vane, the wife of the Marquess of Londonderry, after seeing her portrait, giving her fourteen amethysts, each almost the size of a hens egg. The Marchioness was charmed and although the love affair did not take off, she had the stones mounted in diamond clusters, worn in a variety of ways including a necklace, stomacher or tiara. Whilst the jewels still remain in the family, they are currently on permanent display at the Victoria and Albert Museum, London.