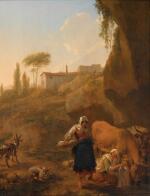 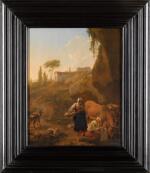 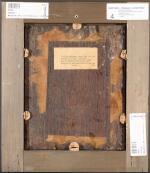 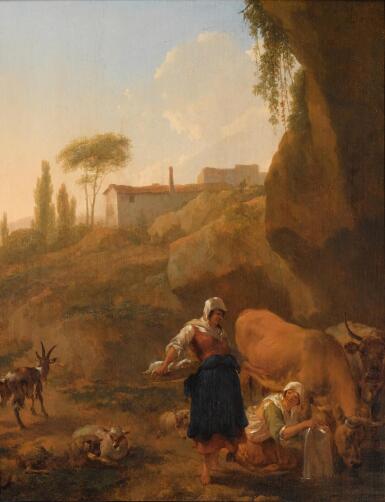 NICOLAES PIETERSZ. BERCHEM | A rocky southern landscape with two peasant women and their flock and cattle halting near a stream

NICOLAES PIETERSZ. BERCHEM | A rocky southern landscape with two peasant women and their flock and cattle halting near a stream

The panel is uncradled, flat, and stable. The paint surface is clean, with a discoloured varnish. Inspection under ultraviolet light reveals fine lines of retouching scattered throughout the composition, notably centre and upper centre to reduce the appearance of the wood grain. There are slightly more concentrated areas of retouching in the central figure's proper left forearm, a spot above the goat centre left, in the central shrubbery and in the top of the central building and the sky above it, the largest measuring 2 x 1 cm. None of these distract from the legibility of the image, which appears to be in overall good condition.

It is very likely Berchem travelled to Italy, even if not confirmed by existing documents, due to the many paintings he executed in warm tones that evoke the Italian countryside, such as the present work.

It is likely that Berchem reused larger compositions giving them a more Italianate tone following the fashion of the day: one, undated, was recorded in the Alte Pinakothek, Munich, by 1904 (inv. no. 598) and is currently in Bamberg, Bavaria;1 the other is kept in the Gemäldegalerie Alte Meister, Dresden.2 It bears the same date, but instead of the southern setting, the castle of Bentheim is in the background - a feature also found in works by Berchem's contemporaries, such as Jacob van Ruisdael (1628/29-82).