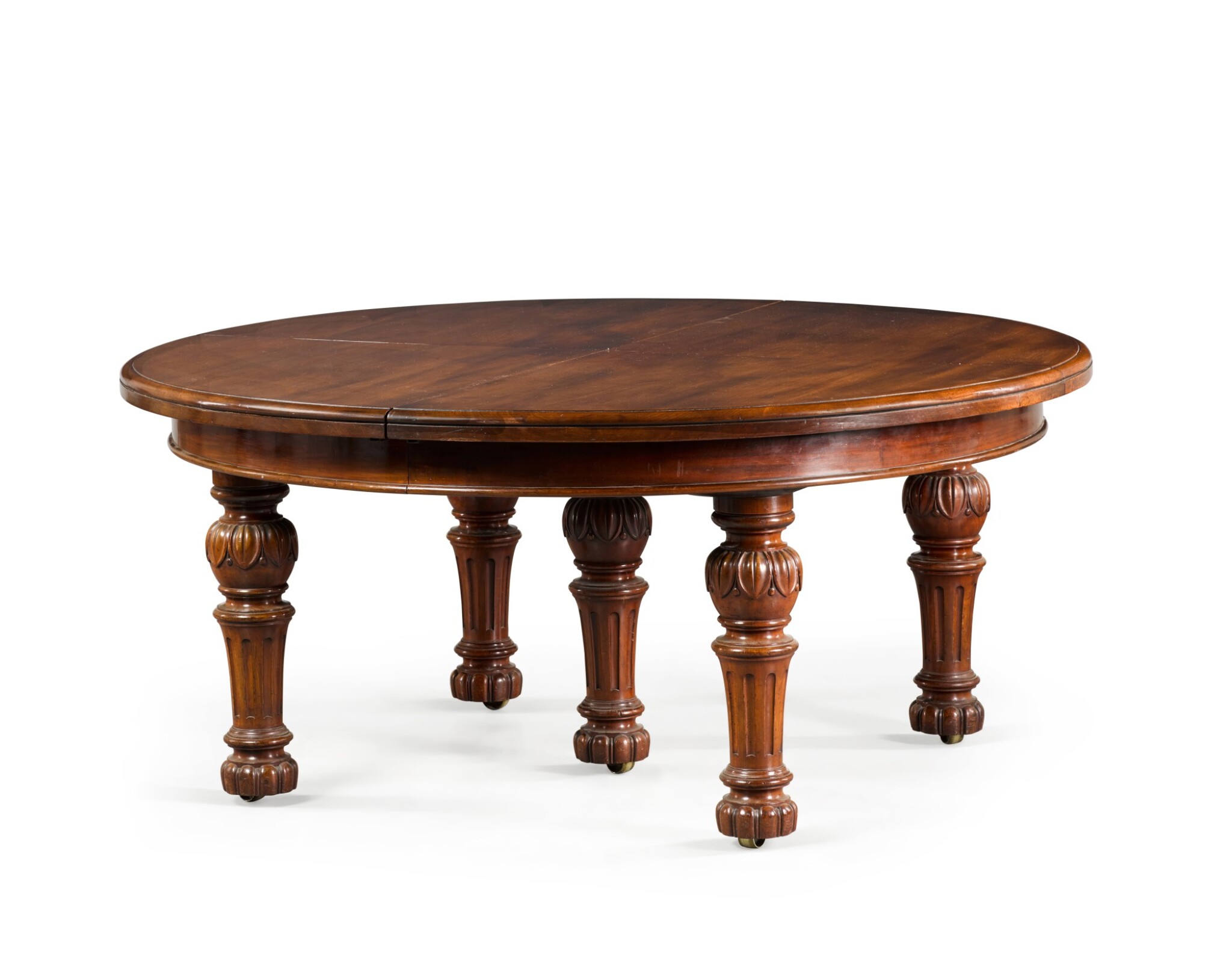 expandable in two forms, either as a superelliptic table with each quadrant numbered 1, 2, 3, 4 and pulling out to form a larger table by the addition of segmental leaves with corresponding numbers, or split at its original diameter and extend telescopically to form a long rectangular table with D-ends, although lacking leaves for this configuration, the solid mahogany top on four corner and one central turned baluster with carved lotus leaf and berry decoration with lobed bun feet and concealed castors, the central block stamped 'Johnstone and Jeanes / 67 New Bond St. / London / 48769', with eight lacquered-brass clips stamped 'Collinson and Cope' with internal rail to accommodate clips

This remarkable table is in good conserved condition and ready for use. Originally it would have additional leaves to facilitate lengthening which should be easy to re-create with new leaves. The sophisticated telescopic mechanism is stiff to one side - although easily remedied - but means total dimensions of table extended length ways are not currently available. Re-polished and generally with minor old marks and scratches consistent with age and use including a Z form scratch on leaf IIII, two small indents leaf II. Pet damage to collar above gadrooned foot to centre. Superb quality with potential to restore to full length way extension capability.

The form of this table was invented by Robert Jupe, upholder of 47 Welbeck Street, Cavendish Square, who applied for a patent for a circular extending dining table with segmented top (no. 6788) in March 1835. The description for the patent stated: "An improved expanding table so constructed that the sections composing its surface may be caused to diverge from a common centre and that the spaces caused thereby may be filled up by inserting leaves or filling pieces."

The first tables of this type were produced by Jupe in association with the cabinet-maker John Johnstone of New Bond Street and carry a brass boss to the central mechanism engraved 'JUPES PATENT'. After 1842 the firm changed its name due to a new partnership and became Johnstone and Jeanes. The present table - stamped 'Johnstone and Jeanes / 67 New Bond St. / London / 48769' to the central block - is an evolution of the radial design with the added capability of extending lengthways utilizing a sophisticated telescopic mechanism.