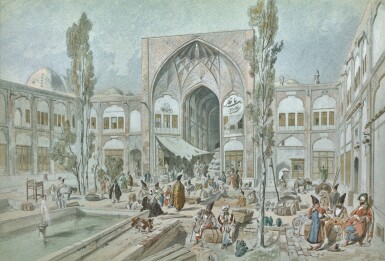 watercolour and gouache over pencil on paper

The artist's sheet is hinged to the backing board along its upper left and upper right corners, on the reverse.

The medium is strong and the support is in good condition.

This rare group of drawings (lots 17-20) is as striking for its documentary importance as for the story of its survival of one of the most extraordinary and dangerous expeditions ever undertaken by a European artist traveller.

In the spring of 1846, a thirty-three-year-old Jules Laurens, an aspiring artist from Montpellier who had trained in Paris under Paul Delaroche, was given the break of a lifetime: the chance to join a geographical expedition to Persia, led by the renowned (and, as it would transpire, onerously named) geographer and engineer Xavier Hommaire de Hell. Hommaire de Hell had previous knowledge of the Middle East, having overseen the construction of a bridge in Constantinople and of a lighthouse on the Black Sea coast, and had now secured funding from the French government to turn his dream of an expedition to Tehran via Anatolia into reality.

Laurens was duly invited to Hommaire de Hell's home to be interviewed. ‘Have you ever mounted a horse?’ asked Mme de Hell. ‘No’ replied Laurens. ‘Do you suffer from sea sickness?’ she continued. ‘Yes,’ he replied. ‘Are you afraid of heights?’ 'Yes I am.’ Despite this inauspicious start, Laurens was hired. The trip would last three years. Hommaire de Hell and Laurens travelled to Constantinople, before embarking by sea for Anatolia in June 1847.

On 24 August the two travelling companions reached Trebizond, the first stage on their long journey overland to Tehran by way of Erzeroum, Vann, and Tabriz. Their trek was long and arduous: despite spending up to fourteen hours a day in the saddle, overnighting in uncomfortable carevanserais, and battling cholera, fever, freezing temperatures, and snow blindness, Laurens assiduously recorded his impressions in his sketchbook at every stop. When they finally reached Tabriz, in north-west Iran, they were received in the house of a banker by the name of Railly. Delighted at the sight of civilisation after the travails of their journey, Laurens wrote: ‘I have found the charming streets, the irrigation canals, the culture, the bustle of Europe. Moreover, its population is intelligent, and lively!’.

In February 1848 the two explorers reached Tehran. Here, they were greeted by Comte Étienne de Sartiges, French envoy to Persia who introduced them to the court of King Mohammad Shah Qajar. On 2 March 1848 Laurens and Hommaire de Hell left Tehran on foot for Isfahan. It would be their last journey together. To escape the unbearable heat they walked by night. Upon their arrival, Hommaire de Hell’s health deteriorated. He died on 30 August and was buried at the Armenian cemetery in Julfa, in present day Azerbaijan. Returning to Tehran alone, Laurens finally left the city on 8 February 1849, setting foot in Marseille on 25 June.

Of the hundreds of sketches Laurens made during the journey, upon his return many were turned in lithographs for popular magazines and publications, including the fourth volume of Voyage en Turquie et en Perse exécuté par ordre du gouvernement français pendant les années 1846, 1847 et 1848, based on Hommaire de Hell's journal and published by his widow. A portion of the original watercolours and drawings were given to the library of the École des Beaux-Arts, Paris.

Tabriz is one of the historic capitals of Persia located in the north west of the country. In this view, a courtyard-shaped caravanserai plays host to travellers and merchants, some wearing late Qajar-period dress. The name of the fourth righteous imam, Ya Ali, is visible in one of the niches in the background, alongside the year the building was completed: 1104 A.H. (1692 A.C.E.).

Built as inns or staging posts for merchants travelling in the region to stock-up on supplies, rest, and water and feed their horses, caravanserais were architectural structures common to all Asia Minor. Typically square-shaped, the walls included stables and accommodation for travellers. An open courtyard, typically with a communal fountain for both religious and secular purposes, allowed space for trade, socialising, and the exchange of news.