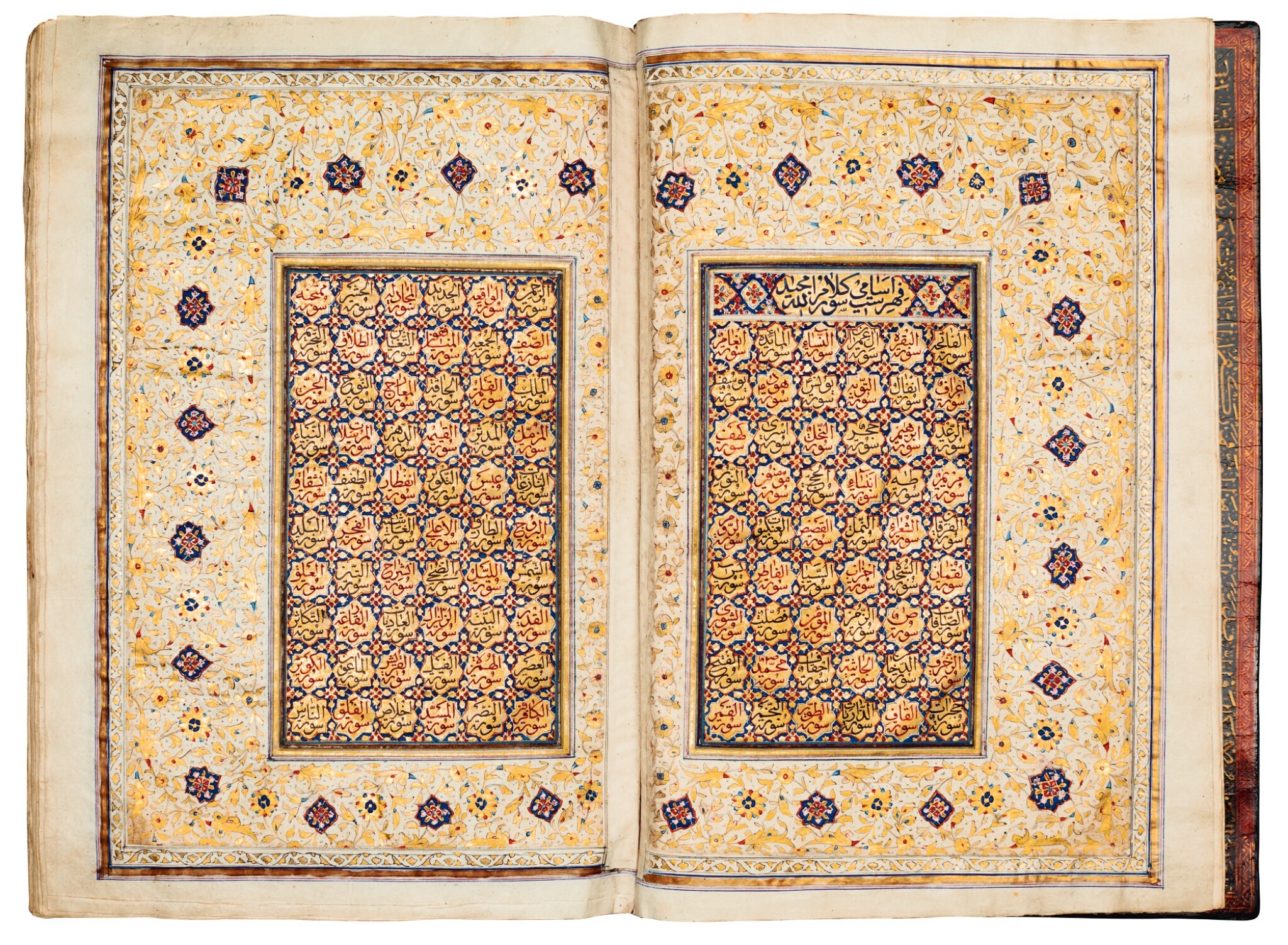 ARABIC MANUSCRIPT on paper (335 x 233mm.), 406 leaves, plus 10 flyleaves, 12 lines to a page (text panel 185 x 104mm.), written in naskh in black ink, ruled in blue, gold, and red, the external Qajar margins lavishly illuminated with polychrome and gold interlacing scrolls and flowers, verses separated by pointed gold roundels, surah headings in red cursive against a gold ground within polychrome cartouches, gold and polychrome verse markers in the margins, f.1b and 2a with a list of surahs each within eight-pointed gold stars, f.2b and 3a with a double-page spread of illumination consisting of a central lobed panel with gold naskh against a red ground, f.3b and 4a with a polychrome and gold incipit frame, f.401a bearing the colophon, followed by prayers, red morocco-backed lacquer boards, the outer boards richly decorated with red and yellow flowers and foliage on a gold background, the inner boards decorated with a central panel of bird in a tree, within several floral borders and Arabic text

A MAGNIFICENT ILLUMINATED QUR'AN IN A RICHLY PAINTED FLORAL LACQUER BINDING. The beauty of this Qur'an is a testament of the grandness of Ahmad al-Nayrizi and the respect and reverence which he gained not only during his lifetime but especially in the following centuries. Remargined during the Qajar period, the borders of this manuscript are lavishly decorated with different patterns of interlacing flowers and vegetation, making it an exceptionally luxurious manuscript, likely to have been commissioned by a member of the nobility.

Ahmad al-Nayrizi was one of the most prolific calligraphers of the Safavid period. Born in Nayriz in Fars, he studied calligraphy under Muhammad Ibrahim ibn Muhammad Nasir Qumi, also known as Aqa Ibrahim Qumi (active between 1659 and 1707). Al-Nayrizi later moved to Isfahan and became the court calligrapher during the reign of Shah Sultan Husayn (r.1694-1722). The Shah and his court became important patrons of Nayrizi, who is reputed to have commanded large fees for his work. His calligraphic skills were highly regarded especially in the late eighteenth and nineteenth centuries, under the Qajar dynasty. Another Qur’an copied by Ahmad al-Nayrizi, re-margined in Qajar period and bearing a dedication to Fath ‘Ali Shah Qajar was sold in these rooms, 9 October 2013, lot 80.

In good condition, the margins are later dated to the Qajar period, minor smudges to the illumination otherwise crisp as visible in the catalogue, minor stains and occasional restoration to the paper due to splits caused by the acidity of the ink, European numerals written in pencil on the verso of each leaf, on the upper part of the border, some minor pen marks not affecting the text, the binding with minor scratches and minor losses, some pencil notes on the fly-leaves, as viewed.