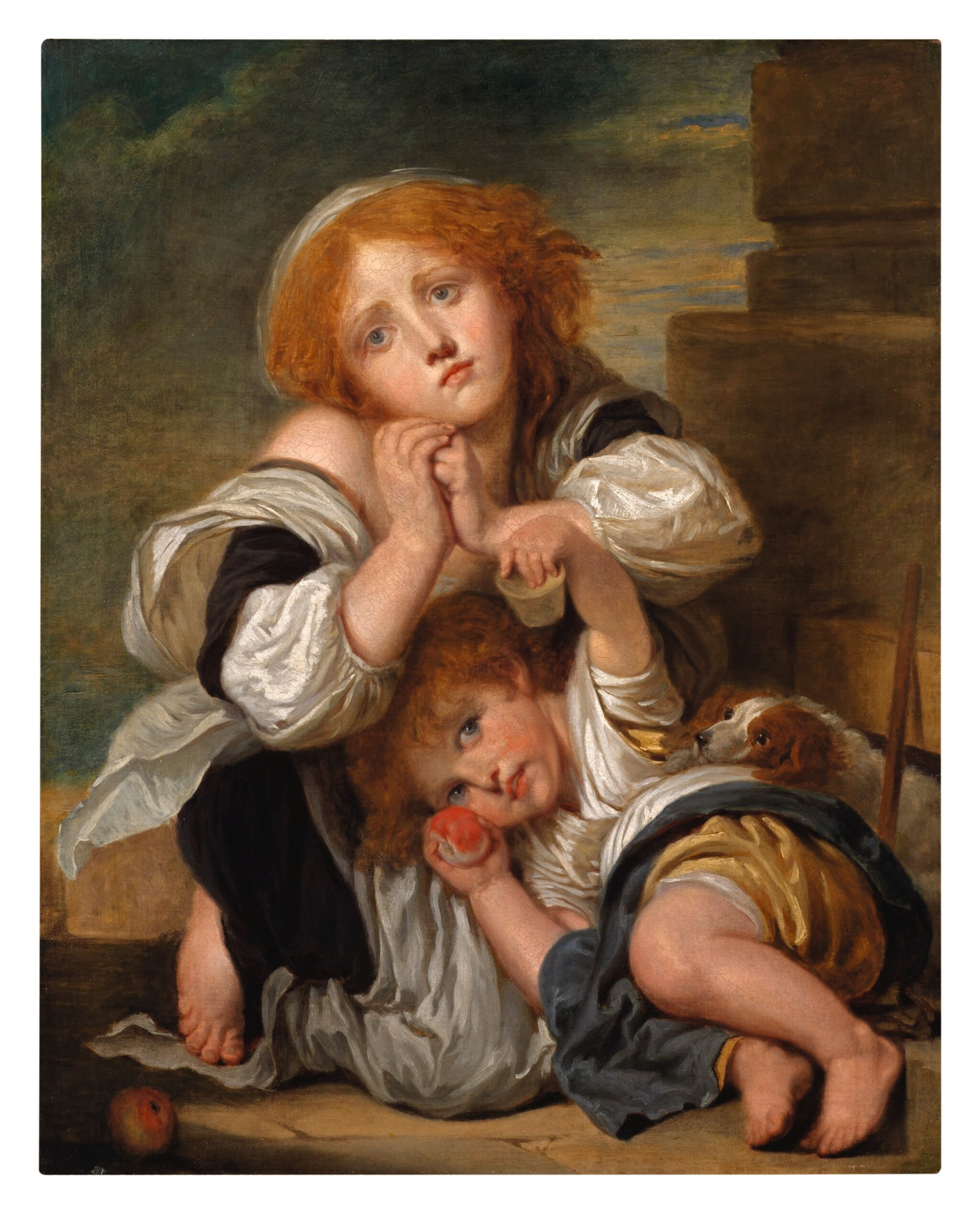 The canvas is unlined and remains in good condition. The surface is flat and even with a satisfying varnish. The lively brushwork and impasto in many of the highlights remains well-preserved and vivid. There is a craqueleure pattern throughout but it is not bothersome. Under ultraviolet light one can see a handful of small retouchings, mostly in the dark shadows for example in the lower left corner and at the top edge of the boy's hair. There are some small areas of repaint in the girl's face: along the chin line, below her right eye and a bit in her eyebrows. It is well applied and not noticeable with the naked eye. The painting can be hung as is and is offered in a carved giltwood frame.

"While Greuze’s highly finished paintings are deservedly well-regarded, I find his brushier work to be the more interesting, as his quick and masterful strokes were so ahead of his time, even if that wasn’t always the case with his subject matter. The other version of this painting is more highly finished, so the loose brushwork here allows us a peek into the artist’s method – was this an oil study for the painting at Fyvie Castle? Or did he work up a second version in a looser style? It’s a wonderful painting."

Les Petits Orphelins is a beautiful example of Greuze's unmatched ability to express emotion through paint, particularly in his depictions of young children. The young orphans here address the viewer through their poses; their sweet, emotive faces are raised to meet the viewer’s gaze. The girl kneels, supporting her brother, her hands clasped beneath her chin in a gesture of earnest need. Even the dog looks listless and forlorn.

Another version of Les Petits Orphelins, of almost identical size and composition, belonged to the collection of Sir Ian Forbes-Leith of Fyvie Castle, Aberdeenshire.1 The Castle and its collection are now owned by the National Trust of Scotland. Les Petits Orphelins was purchased by Alexander Forbes-Leith, Lord Leith of Fyvie in London in 1901. Its distinguished provenance includes ownership by Greuze’s notary, and avid collector of his work Charles- Nicolas Duclos-Dufresnoy (his posthumous sale, Paris 18 August 1795, lot 10, sold for 48,500 livres) as well as by Napoloeon’s uncle Joseph Cardinal Fesch (his sale, Rome 17-18 March 1845, lot 355-1831).

There are some subtle differences between the present painting and the version at Fyvie Castle; for instance, the young girl’s brow in our version is slightly more furrowed and her eyes have a more mournful look about them.

The late Dr. Edgar Munhall confirmed the attribution of this painting and dated it to 1785-90.