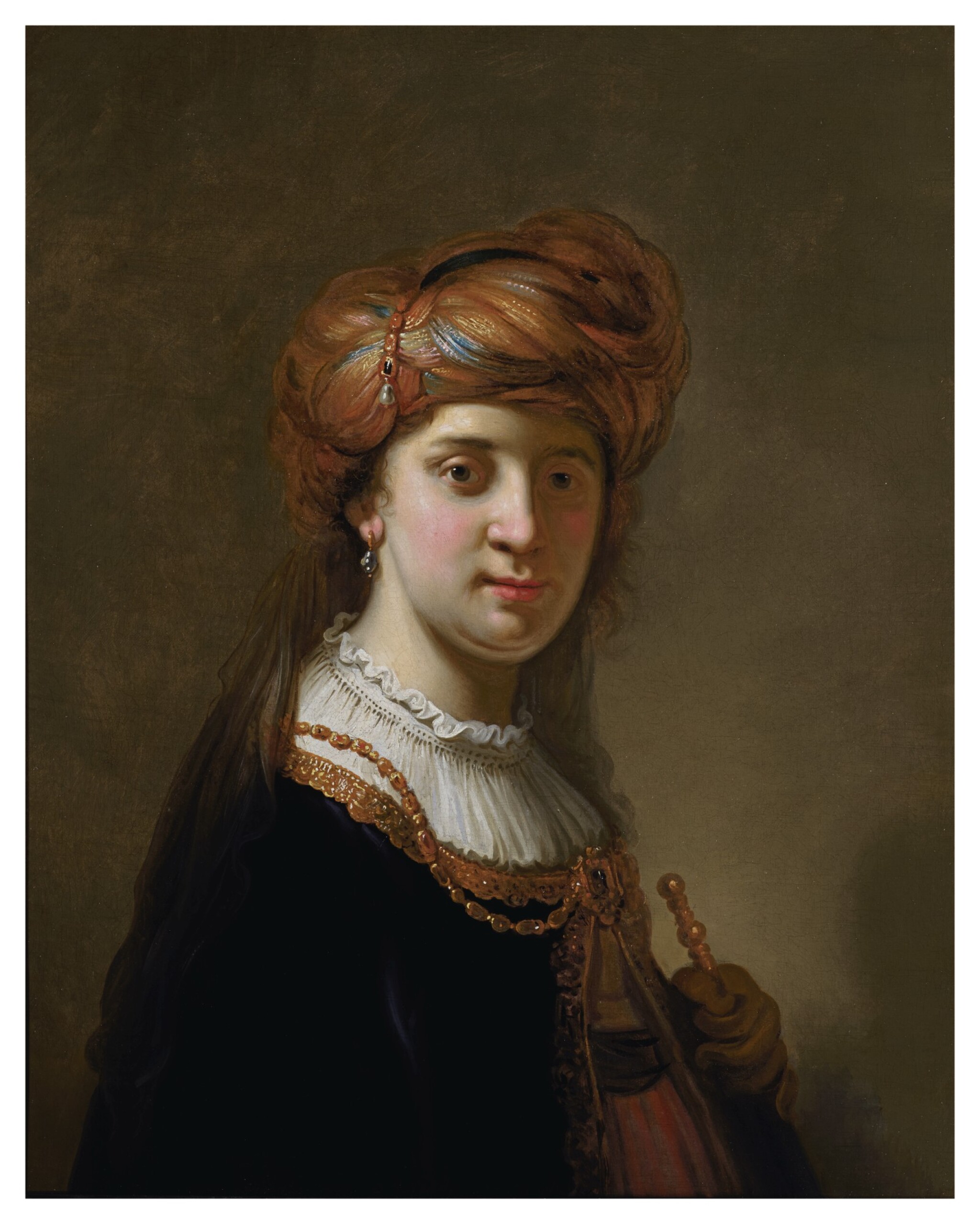 PORTRAIT OF A LADY IN A TURBAN, HALF-LENGTH

This canvas has been fairly recently relined. The surface is clean, and beautiful impasto and brushwork is retained throughout. Under UV: There are small touches of restoration, none of which deal with major structural issues, except for perhaps two small spots in the lower right background. For the most part, there seems to be touches in old heavy-ish craquelure, typical of this type of picture, including in the upper right background, above her head, in her turban, and some touches in her face and costume. There are two small restorations around her eye at left and under her nose at right. None of these retouches are terribly disturbing, as they appear to be more cosmetic in nature. The paint layer overall is very nicely preserved. The painting is ready to hang as is. In a Dutch 17th century style black ebonized frame.

"Having assisted in the formation of two collections devoted to Rembrandt and his School (the Bader Collection at Queens University and the Leiden Collection in New York), I have personally experienced the diminishing availability of this school of paintings. So it was a great pleasure for me to welcome this tronie or head study by Rembrandt’s pupil, Govaert Flinck, into the sale. This is the only painting from the Rembrandt School in the entire sale, which is a testament to how rare this category of paintings has become."

Govaert Flinck was born in the German city of Kleve, near Nijmegen, and his affluent father at first disapproved of Flinck’s desire to become a painter. After studying in Leeuwarden under the Mennonite painter Lambert Jacobsz., Flinck moved to Amsterdam and apprenticed with Rembrandt for about one year in circa 1634/5. At this time Rembrandt was living in Hendrick Uylenburgh’s shop, and Flinck took over the studio when Rembrandt left in around 1635/6. As one of Rembrandt’s most talented pupils, Flinck made a name for himself as a portraitist to Amsterdam’s elite, and often his works were nearly indistinguishable from Rembrandt’s. It was not until about 1645 that Flinck adapted his style to fit more closely with the popular Flemish fashion.

The present lot was painted in circa 1640, when Flinck was an independent master in Amsterdam and very commercially successful with wealthy patrons. This was the period in which Flinck was beginning to find his own style distinct from Rembrandt, and the handling is comparable to that in a number of paintings produced by Flinck during the late 1630s and early 1640s, most notably Saskia as a shepherdess, dated 1636 (fig. 1) and Portrait of a man, known as Gozen Centen, circa 1640 (fig. 2). This opulent depiction of a woman is a tronie, or study head/figure, rather than a true portrait. Rembrandt and his students used tronies to study human expression, pose, and experiment with costumes and accessories. The turban worn by this anonymous woman was likely a studio prop and serves to characterize the figure loosely as “exotic” rather than intending to accurately depict the costume of another region. Rembrandt often used vaguely Eastern dress and turbans on Dutch sitters to indicate foreignness or a biblical or historical setting.1 Flinck’s painting is not part of a specific narrative but the style of dress would have appealed to a potential buyer familiar with similar figures in history paintings.

The present lot is the first of two versions of this work; the second is at Chatsworth House, Derbyshire. The superlative quality of the present picture makes a strong case for this being the prime version. Dr. Tom van der Molen, curator of the Amsterdam Museum, to whom we are grateful, believes this version to be the prime on the basis of comparison with contemporaneous works by Flinck.2 Notable for both its detailed rendering of textures and surfaces as well as its sensitive execution of the facial features, the present tronie highlights Flinck’s connection to his master Rembrandt as well as the independent style he was developing, and looks forward to more mature works by the artist.

For more on Rembrandt’s use of exotic dress, see E.S. Gordenker, “The Rhetoric of Dress in Seventeenth-Century Dutch and Flemish Portraiture,” The Journal of the Walters Art Gallery, 57: Place and Culture in Northern Art (1999): 90-94.

2. A copy of Dr. Van der Molen’s report is available upon request.