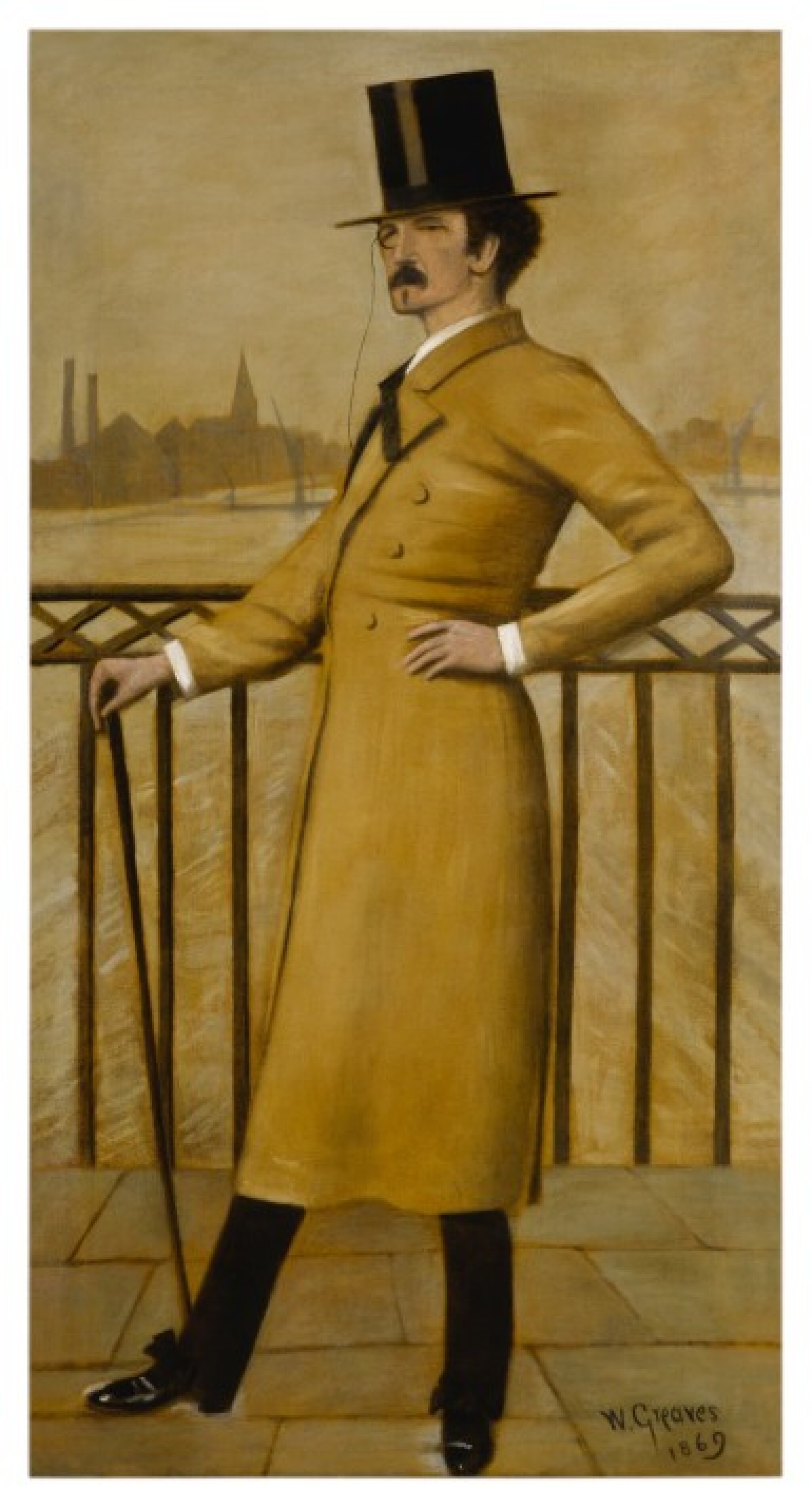 JAMES ABBOTT MCNEILL WHISTLER ON THE WIDOW'S WALK AT HIS HOUSE IN LINDSEY ROW, CHELSEA

This life-size portrait has been recently relined. It is stable and ready to hang as is. Under UV: scattered restorations of various types, which have been applied with exceptional skill. There is a damage and a repaired fill in the upper right in the background, some others near the top and half way down his walking stick. On his lower hip at right and into the railing in the background, there are three horizontal restorations, which appear to have addressed thin tears. There is one thin repaired tear above the signature and one across his ankle at right. Some strokes of restoration to the glazes in his face. Otherwise, most of the retouching appears to address more cosmetic issues, and much of it is applied in scumbled glazing. Some of this is no doubt due to the painting technique, and all of the restorations are very well done and the painting presents itself in an extremely impressive way. In a modern, ebonized and molded Dutch Golden Age style frame.

With the Rosenbach Galleries, Philadelphia;

"Whistler’s portraits of his friends and fellow artists are some of my favorite paintings, so what a treat to see the tables turn with this portrait of Whistler himself by his neighbor, friend, and student Walter Greaves. While their relationship might not have been perfect, the wit with which Greaves has painted Whistler is as fascinating as their friendship."

Walter Greaves' relationship with Whistler was fraught with intrigue, marked by scandal, and characterized by adoration and hero worship. Walter and his brother Henry met Whistler in 1863, when Whistler fortuitously became their neighbor at Lindsey Row in Chelsea. The brothers became Whistler's studio assistants, buying his art supplies and preparing his canvases and colors. They became devoted followers for over fifteen years, and as Gordon Fleming points out, "Whistler's domination over the brothers was total. They even tried to look like him. They wore hats, ties and gloves like his, and they grew little moustaches."1

Greaves' most notable artistic success in 1910 was marred by widespread controversy. In a one-man show at the Goupil Gallery, London, he exhibited 50 paintings, which influential writer Clutton-Brock of The Times considered remarkable and original, providing a glowing review for the relatively unknown painter. However, this unexpected achievement for the self proclaimed "pupil of Whistler," created an outrageous art scandal, venomously spearheaded by Whistler biographer Joseph Pennell. At his most vociferous, Pennell claimed many of the exhibited works were actually attributable to Whistler himself.