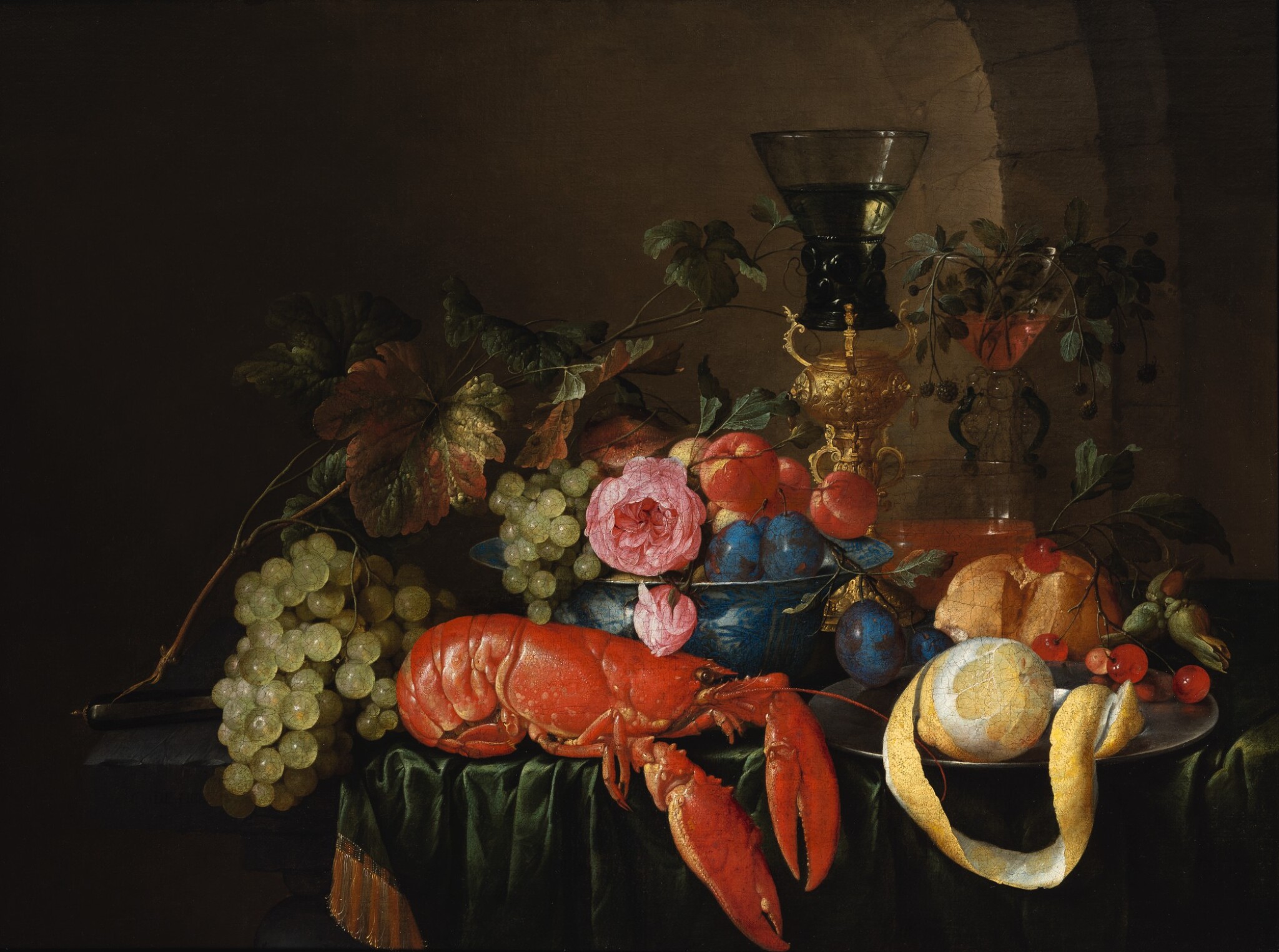 STILL LIFE WITH A LOBSTER, A PEELED LEMON ON A PEWTER PLATTER, A ROEMER, AND FRUITS ON A STONE LEDGE WITH GREEN DRAPE

The canvas has an old, stable relining. The canvas is clean and presents itself beautifully. The paint surface overall is beautifully preserved with only small areas of wear to the finer details of the wine and beer glasses and parts of the background, the knife, grapes and the ledge. There are no major damages or repairs. Ultraviolet light reveals careful retouchings to certain areas, for example, to the stem of the wine glass and the wall behind it, to small losses above the roemer and the fig and to scattered retouchings in the background, notably to the left side, behind the vine leaves and around their stems and the edges of the stone ledge to the lower left. There are some small retouches in the lemon peel, and some touching in the dark background between the vine leaf and the grapes left of center. Overall, the general body of the still life appears largely intact with little or no later intervention. This is a highly recommendable picture and is ready to hang. In a dark, ebonized, 17th century Dutch style molding.

Rutter Collection, Vienna, probably since at least the 1960s;

Rutter collection, Vienna, by 1960s, and by descent;

"This is the quintessential Dutch pronkstilleven (fancy or ostentatious showpiece), only it is more intimate than the extravaganzas by Cornelis de Heem’s father, Jan Davidsz. We see grapes, a cooked red lobster, peaches and plums in a bowl with a rose to highlight the fruit, a cut lemon, a bread bun surrounded by freshly cut red cherries; and finally several man-made accessories, such as a glass of beer, a Wan-Li bowl (or Dutch imitation); and standing behind all of this a common Dutch roemer or drinking glass clipped on top of an elaborate silver pedestal which is gilded in gold; next to a refined façon de venise wine glass, which is festooned with wild black raspberries. We are witnessing a cornucopia of abundance, made possible by the dominance of Dutch trade throughout the world in the seventeenth century."

In his formative years Cornelis de Heem was trained in the studio of his father Jan Davidsz. de Heem (1606–1683/4) in Antwerp. This phase lasted until 1660–61, when he was admitted to the Guild of Saint Luke in Antwerp as a painter in his own right. The Treaty of Munster, which ended the Eighty Years’ War, permitted De Heem to work and live in both the Northern and Southern Netherlands and in addition to Antwerp he was active in Utrecht, IJsselstein, and The Hague. The present painting clearly reflects the work of his father in both coloring and design and probably dates to the late 1650s or early 1660s.

Like his father’s works, Cornelis de Heem’s still lifes feature elegant, expensive items that speak to the wealth of the painting’s eventual owner and the importance of exotic imported goods from the vast maritime empire of the Dutch Republic. The grapes, plums, and apricots displayed here would have been imported to the Netherlands from the Mediterranean and would be quite expensive for a Dutch consumer. While lemon is a common motif in Dutch still lifes, it too would have come from warmer climes. The lobster was, and still is, considered a delicacy eaten on special occasions. The wine and beer in the elegant glasses were typical drinks for many meals, but alcohol itself can be a vice when consumed in excess. Taken together, the foods in this lavish feast could be a warning against the temptations of gluttony and material wealth. Although the meal looks beautiful and delicious, it will not last, just like other temporal pleasures. The De Heem family was Catholic and the father Jan Davidsz. as well as his sons often included subtle moral or religious messages in their still lifes.

De Heem often repeated still life elements in his compositions which helps to establish a stylistic chronology of his works. Comparable works from this period include, for example, the Still-life with a wine glass and oysters of similar size (panel, 46.5 x 64.4 cm.) in the Musée Fabre in Montpellier, which is signed and dated 1659.1 The motifs of the façon de Venise wine glass filled with blackberry sprigs, the Delft bowl and the distinctive curved stone arch behind may be found in another signed canvas sold London, Phillips, 5 December 1989, lot 120. The combination of bold colors and juxtaposition of different textures—the hard shell of the lobster against the soft velvet drape—make this still life enjoyable for its visual harmony alone, and a modern viewer can marvel at De Heem’s skill with or without knowing the potentially deeper meanings of the foods depicted.