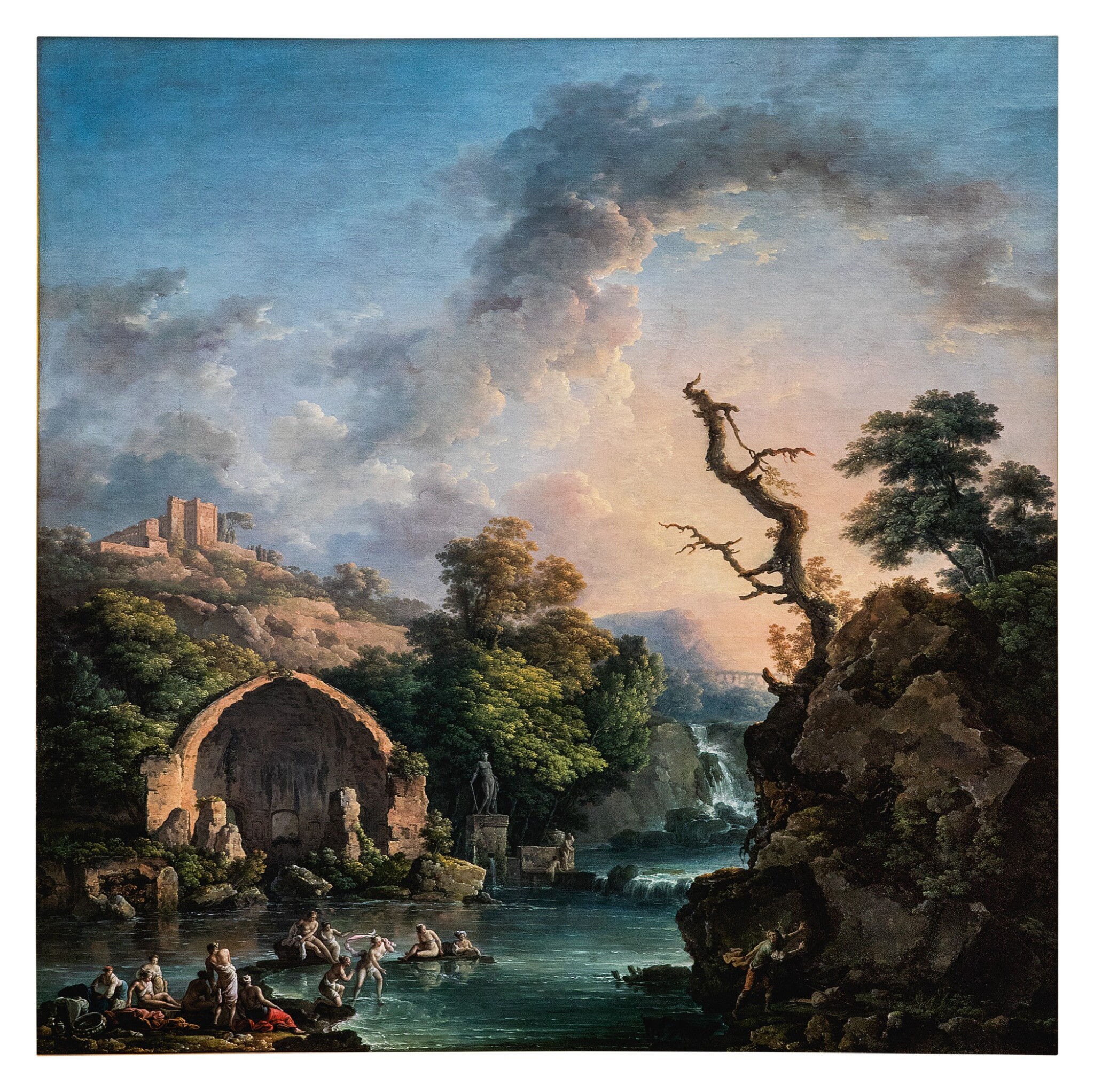 Active in Naples during the second half of the 18th Century

THE TEMPLE OF DIANA AT BAIAE, AN IMAGINARY LANDSCAPE WITH THE STORY OF DIANA AND ACTEON IN THE FOREGROUND

The canvas has an old glue relining. The surface of the painting is quite nicely retained, with beautiful detail and tonality throughout. Under UV: minimal touches are visible, apart from a few dots in the lower right, a small touch in the water lower center, some small feathered touching in the sky above the bare tree, and one or two touches at the upper edge. Otherwise, a large impressive picture in wonderful condition. Offered in a modern gilt slip frame.

"This is a superb example of a classical landscape by the Neapolitan, 18th century painter Carlo Bonavia and typical of the type of painting favoured by visiting Grand Tourists. The artist contrasts the tranquil elegant landscape at sunset with the mythological story of Diana and Actaeon which unfolds in the foreground and culminates in the young hunter’s tragic death at the hands of his own hounds."

While Carlo Bonavia seems to have been trained in the Neapolitan landscape tradition of Salvator Rosa and Leonardo Coccorante, it was the French painter Claude-Joseph Vernet who most influenced his style. Vernet was intermittently in Naples between 1736 and 1746, and the circle of artists he influenced included not only Bonavia but also Pierre-Jacques Volaire, Lacroix de Marseilles and Francesco Fidanza. Bonavia occasionally copied Vernet’s compositions, especially at the outset of his career, and favored the delicate Rococo palette of the French master. Bonavia did, however, develop his own distinctive style, with a chalky finish and atmospheric approach which differs significantly from Vernet.

Little is known about the life of Bonavia. He is thought to have been from Rome, though active in Naples between circa 1751 and 1788, the years of his earliest and latest dated paintings. He specialized, as in the present work, in capricci in which real features of the countryside surrounding Naples – in this case the Temple of Diana at Baiae– are placed in imaginary, romanticized settings characterized by dramatic lighting and soft tonalities. His idyllic landscapes were popular with Grand Tourists, who flocked to Naples in the eighteenth century. Among his patrons were Lord Brudenell, who commissioned an Eruption of Vesuvius in 1757, and Graf Karl Jopseh Firmian, the Austrian ambassador to Naples in the 1750s, who owned seventeen works by Bonavia.

Although referred to as the Temple of Diana by 18th-century scholars, due to the marble friezes in the interior depicting hunting scenes, the building depicted here by Bonavia was actually part of a bath and villa complex, located in the fashionable Roman seaside resort of Baiae on the Bay of Naples. The Temple seems to have been a favored motif with the artist, appearing as it does in several other canvasses by Bonavia. In the present work, the temple, crowned by a colossal ogival dome, already half-collapsed in the artist’s day, is bathed in the golden light of dusk.  While the figures in the foreground appear to simply be a group of bathers, in fact it depicts the story of Diana and Acteon from Ovid's Metamorphoses, at the moment when the young hunter Acteon surprises the goddess Diana while she is bathing with her nymphs.