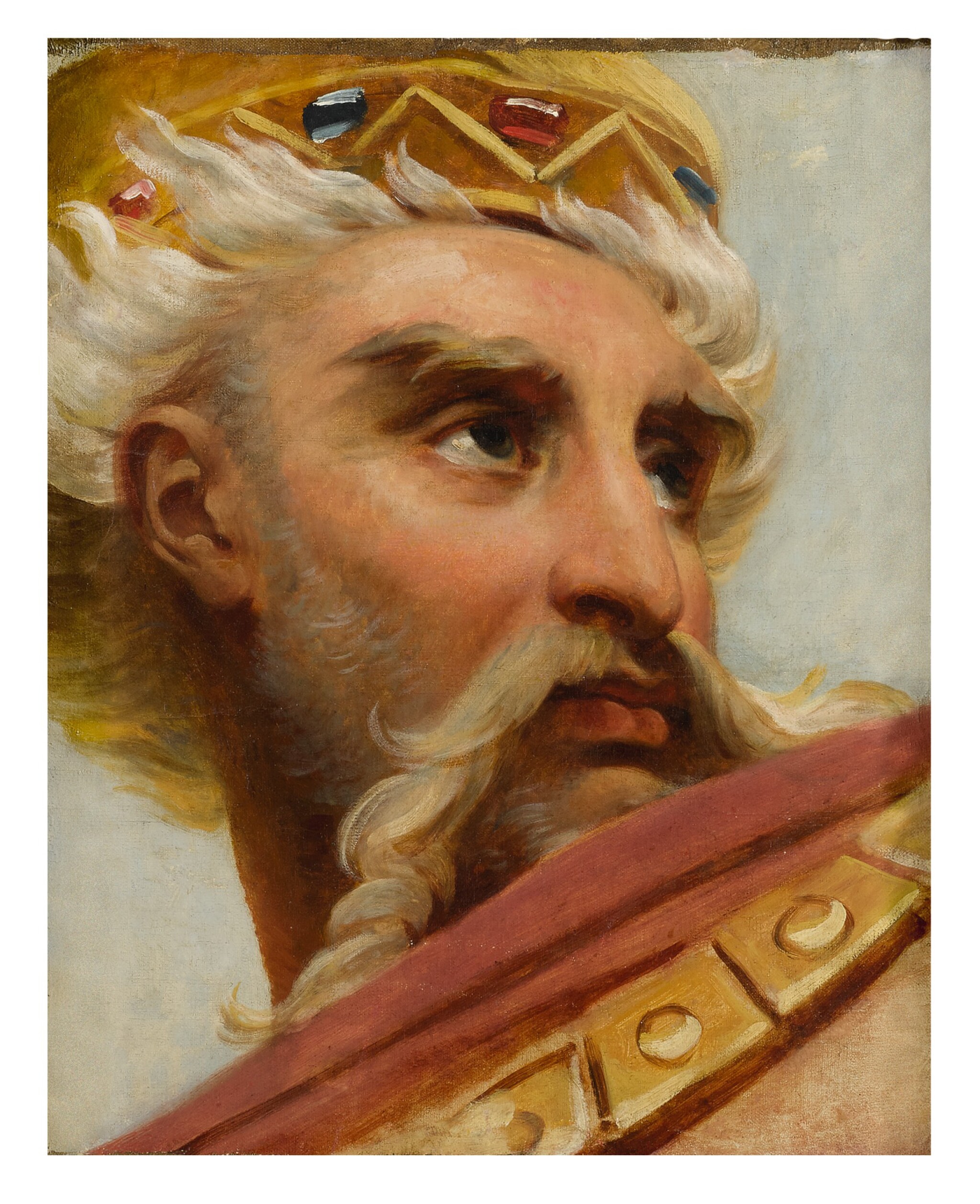 The painting has been relined and is flat and stable, though there are a few creases running horizontally across the canvas which can been seen in raking light. The varnish is thick and bright, and the colors have retained their vibrancy nicely. The loose, sketchy brushwork, particularly in the hair and background, is well-preserved even if the surface is slightly flatter than it once may have been. Some retouching is visible under ultraviolet light, most noticeably in the cheekbone and in a small area above the sitter's proper right eyebrow; there are also two thin scratches in the lower left. Overall the painting presents well and can be hung as is. Offered in a carved giltwood frame.

The collection of the artist;

"The monumentality of this depiction of the great Charlemagne is what strikes me here. This coupled with the light and almost bucolic colors makes it a rather unique image. His strikingly contemporary facial hair stands in contrast to the stoic, outward glance with which Charlemagne surveys his empire, or perhaps his future as Emperor."

This painting is a study for the figure of Charlemagne that Gros executed as part of the fresco decorations for the cupola of the Pantheon in Paris. The project was commissioned to Gros in 1812 by Napoleon, who had re-established the Pantheon as a church after it had been secularized during the revolutionary period. The vast program was to depict the apotheosis of the patron saint of Paris, Saint Geneviève, who receives the homage of Clovis, Charlemagne, Louis IX, and Napoleon, each representing one of the four principal dynasties of France. The association of Napoleon with these royal forbears, particularly Charlemagne, was intended to proclaim the legitimacy of his reign, but the work did not come to fruition as planned. In 1814, when the Bourbons were restored to the throne, Gros was ordered to replace the image of Napoleon with that of Louis XVIII. During the Hundred Days, Napoleon countermanded the order, and Gros restored his image on the cupola; but when the French leader was defeated at Waterloo, Louis XVIII was again re-inserted. The cupola was finally unveiled in November of 1824. Gros' work was received as a major triumph and the culmination of his career, for which he was awarded the title of baron.

Two studies for the head of Charlemagne figured in the artist's studio sale held on 23 November 1835: lot 18, a "tête colossale de Charlemagne" and lot 19, listed as "même tet. Petite étude."  The former is certainly identifiable with the present painting, in which the head is larger than life.