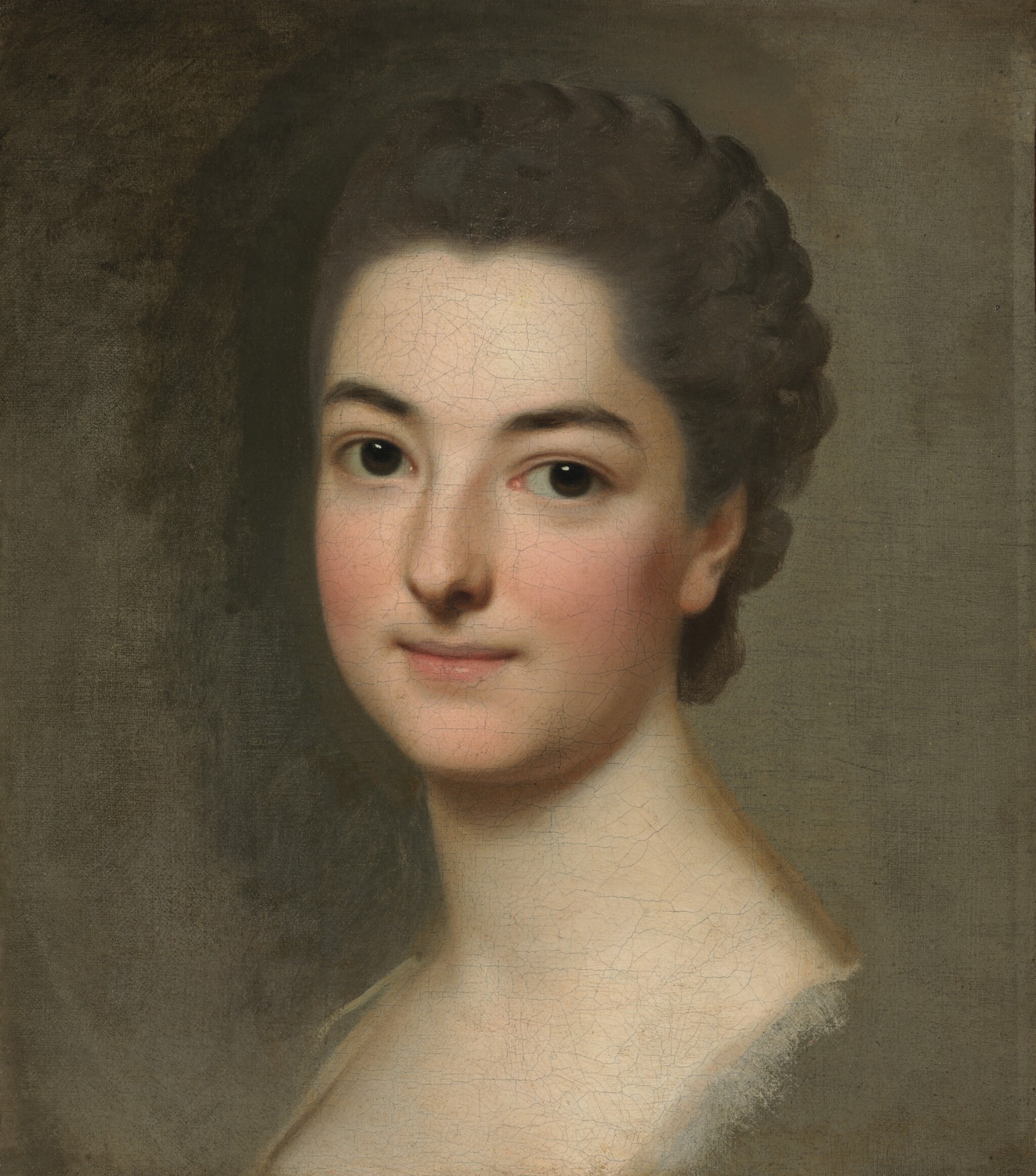 STUDY OF THE HEAD OF A WOMAN, PERHAPS THE ARTIST’S WIFE, NÉE MARIE SUZANNE GIROUST

The painting has an old relining, and the canvas is stable on its stretcher. The surface is clean overall. This painting is an oil sketch, so the background largely consists of the ground layer. The head is more fully worked-up, and the work is overall in very good condition. Under UV: there is a restoration in the background in the lower left, which looks to be rather broadly applied, but does not need to be readjusted. The figure itself however is beautiful, with only a small restored repair in her upper forehead and a few tiny dots in her neck. This is a recommendable picture and is ready to hang as is. In a Regence Style gilt frame.

London, Christie's, 21 July 1972, lot 177 (as Jean Marc Nattier; an apocryphal signature, probably added in the nineteenth century, has since been removed).

"I find this head study, which is slightly unfinished, to be so completely moving that I cannot imagine the subject to be anyone but the wife of the artist. Her eyes are painted with such emotion and wonder that it feels as if she is in the room with you. The unfinished quality along the bottom and in the stark background make it a particularly satisfying composition to the modern eye."

This splendid head study is the work of Alexander Roslin, a native of Sweden who spent the most productive years of his career in Paris, which is why his given name is often Gallicized as Alexandre; he even became a naturalized French citizen. His artistic training included drawing lessons from a draftsman attached to the Swedish admiralty and an apprenticeship in the studio of the painter Georg Engelhardt Schröder, under whose guidance he learned the art of society portraiture in the grand manner of Rigaud and Largillièrre. He became official painter to the Margrave of Bayreuth and director of the local Kunstakademie. In 1747, he embarked on a study tour of Europe, visiting Germany, Austria, and the Italian cities of Venice, Ferrara, Bologna, Florence, Naples, Rome and Parma, along the way executing portrait commissions and receiving honors.

In 1752 he reached his ultimate destination, Paris, where he was to live with only a few interruptions for the remainder of his life. By this time he spoke and wrote the French language with ease, essential skills for any European would-be courtier-artist. His technique had been polished to perfection. Thus not only was he able to capture a faithful likeness, he could invent striking poses and took infinite pains in suggesting settings, costumes and accessories. In 1753 he was made an associate member of the Académie Royale. The following year he was formally inducted into the organization upon presentation of portraits of his colleagues Hyacinthe Collin de Vermont (Musée national du Château de Versailles) and Étienne Jeaurat (Musée du Louvre, Paris). From that time on, he participated in all but two of the biennial Salons held in the Louvre. Among his clients were members of France’s royal family and ancient aristocracy, visiting dignitaries, ministers, prelates, diplomats, financiers, magistrates, officers of the Parlement and “grands bourgeois.” But he also recorded the features of a number of France’s foremost artists, architects and intellectuals.

In 1759, after a long courtship, the Swedish artist married a young woman who may well be the subject of the present head study, the painter and pastellist Marie Suzanne Giroust (1734-1772), with whom he would have six children. She was an accomplished artist, having studied with the history painter Joseph Marie Vien and the great pastel portraitist, Maurice Quentin de La Tour. Her masterpieces are the diploma piece she presented to the Académie royale de peinture et de sculpture upon her election to that institution in 1770, the masterful pastel portrait of the sculptor Jean-Baptiste Pigalle1 and the Self-Portrait in which she depicts herself copying an oval version of Quentin de La Tour’s self-portrait in which he is seen laughing and pointing with the index finger of his right hand, now in a private collection. Tragically, Marie Suzanne Roslin died of breast cancer at the age of thirty-eight. Her husband painted a number of portraits of her, the most striking of which are those showing her executing a pastel portrait of Henrik Wilhelm Peills in her husband’s presence; wearing a black silk veil and carrying a folded fan; and dressed in a pink silk ball gown near her dressing table.