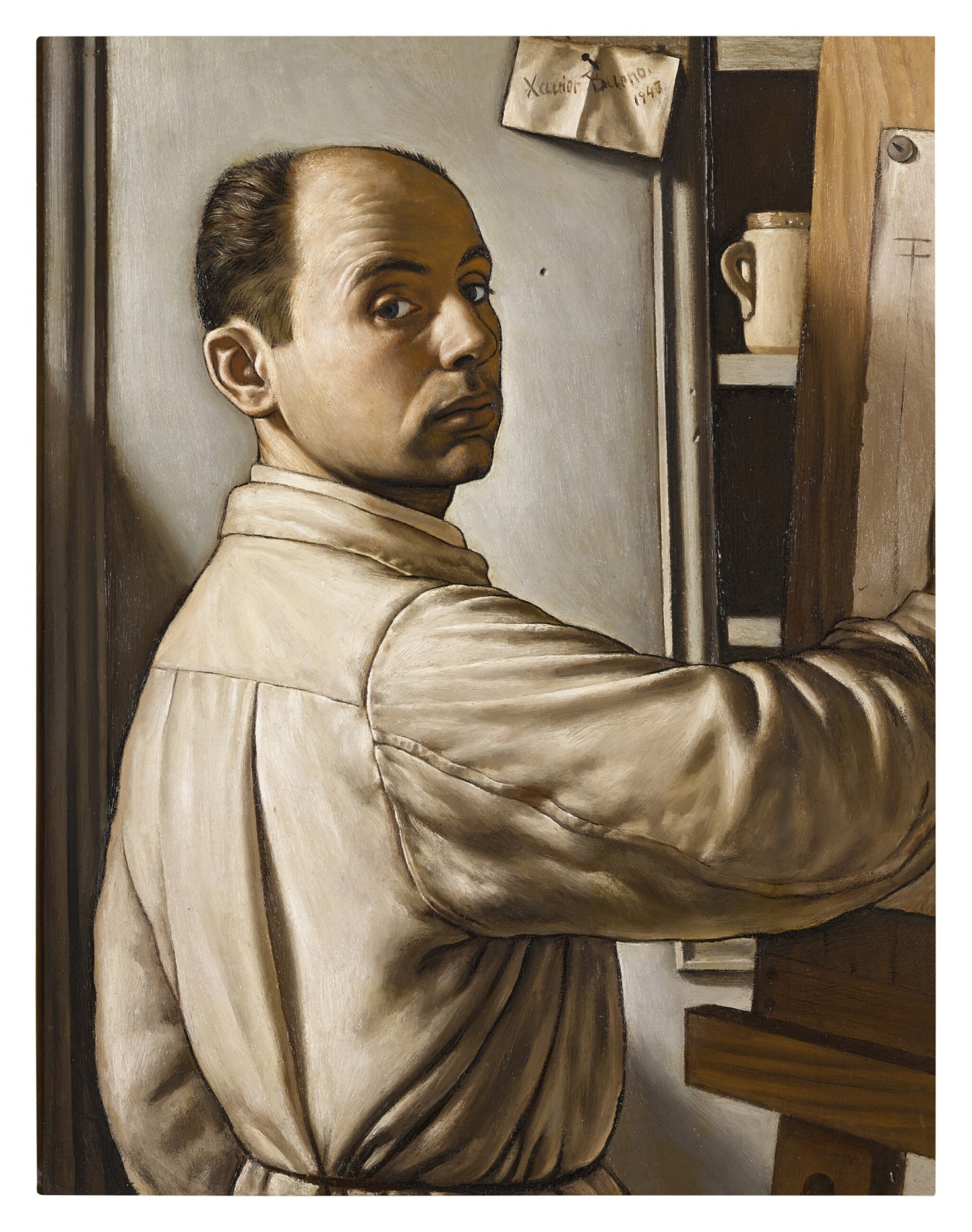 SELF-PORTRAIT OF THE ARTIST AT HIS EASEL, HALF-LENGTH, AGED 32

oil on canvas laid on panel

The panel support is flat and completely stable. There is a stretcher affixed to the reverse. In general, the paint surface is impeccably preserved. At the extreme upper margin a series of 5 pinhead nails have been hammered through the panel. Inspection under UV light reveals a small restoration to the background just above the top of the head, and two small restorations in the dark areas of the shelving unit. The varnish layer is clear and even, with a few areas of old varnish still visible under UV light.

"Self-portraits provide wonderfully unique windows into an artist’s psyche. Here Bueno’s confidence is palpable – this was painted in 1947, the same year he co-founded the group ‘Pittori Moderni della Realtà’."

Xavier Bueno was born in Spain, the middle child of three sons. His father, Javier Bueno, was a journalist and travelling correspondent who regularly uprooted his family to report on various European countries throughout World War I. After the war, the Bueno family moved back to Madrid, but soon after left for Geneva, never to return to Spain again. Xavier proved to have great artistic talent from a young age, enrolling in the Fine Arts Academy in Geneva soon after the Buenos relocated to Switzerland. He moved to Paris in 1937 and exhibited at the Salon d'Automne in 1937–38 and at the Salon des Tuileries in 1938–39. In 1940 Xavier and his brother Antonio took a trip to Florence to study the Renaissance masters. The journey was intended to be fleeting, but the artists unexpectedly remained there until their respective deaths in 1979 and 1984.

In the years directly following World War II, the brothers worked under the instruction of Gregorio Sciltian (1900–1985) and Pietro Annigoni (1910–1988). In 1947, the year of execution of the present self-portrait, Xavier and Antonio founded the group Pittori Moderni della Realtà along with their two aforementioned mentors. The group rejected the art of the avant-garde, vying for a return to realism. The movement lasted only three years, after which the Bueno brothers parted ways to establish their own unique painting styles.