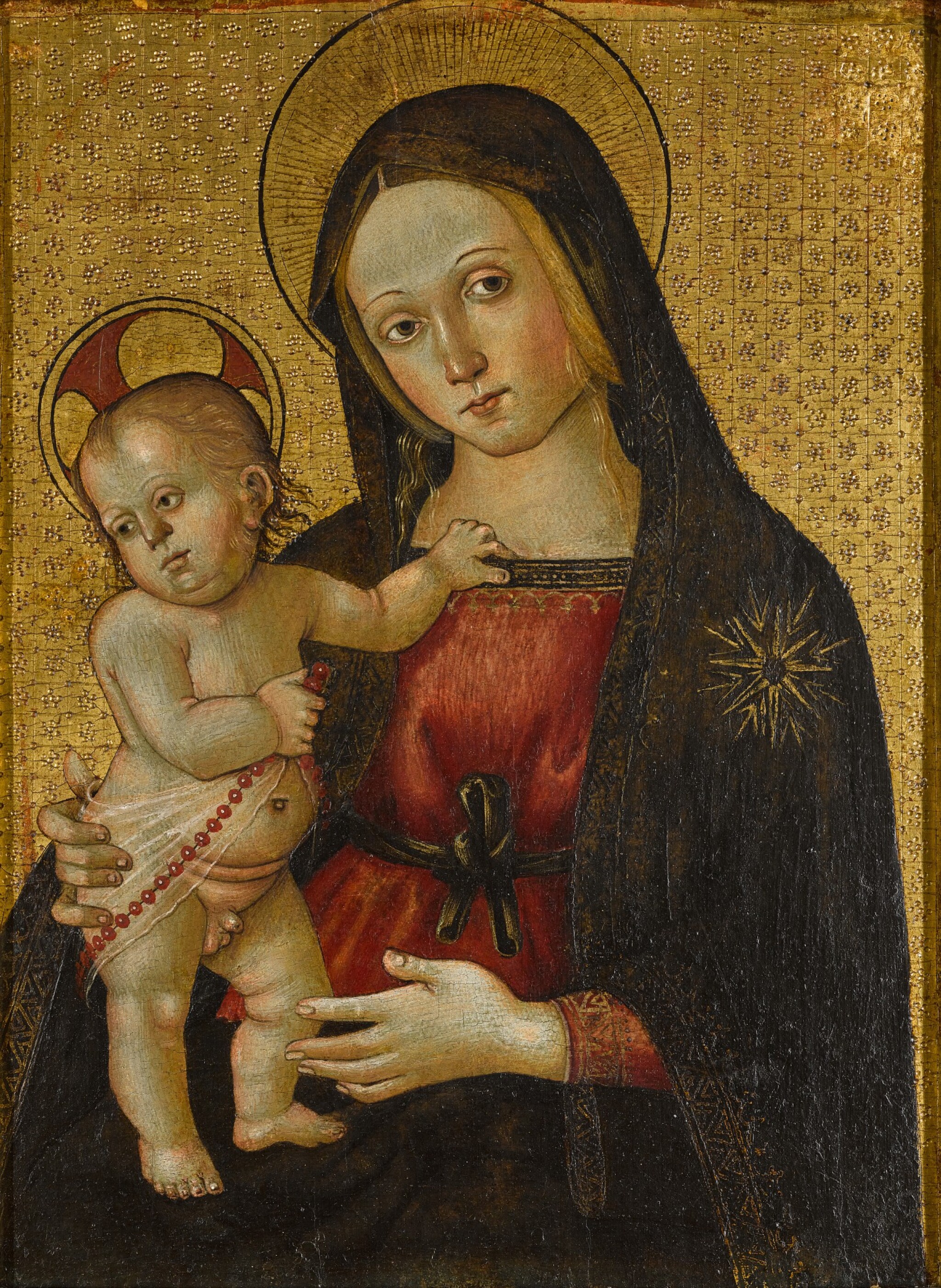 MASTER OF THE ORTE MADONNA

THE VIRGIN AND CHILD

The panel has been cradled and is providing a stable, flat base for the painting. The picture appears to be in very good condition, with no extent damages or loss of paint. There is a small area in the upper right corner where the gilding and punch marks have been redone and there is an area of retouching in the Madonna's neck visible under raking light. Examination under ultraviolet light confirmed the retouching in the neck, which extends in an almost vertical line through the Madonna's jaw to a circle just below and around the right eye. There is also retouching in the red of her dress, which extends into the right leg of the Christ child, and further scattered minor retouching throughout. There is no need for further restoration or conservation and the painting is ready to hang.

"This is a particularly enchanting example of Umbrian Renaissance painting. The gilt background, with its fine punchwork decoration, provides a rich contrast to the intimacy of the figures. The picture would look absolutely magical illuminated by candlelight."

The finely punched gold background of this panel looks back to the tradition of early Christian icons, while the style of the figures is indebted to the latest developments in Umbrian painting, particularly the work of Pietro Perugino. The tenderness of the gestures between the Christ Child and his youthful Mother shows an awareness of this Renaissance master and is characteristic of work by the followers of Perugino, whose most profound interpreter was the young Raphael. The present work derives from the configuration of various paintings by Perugino depicting the seated Virgin and Child, a model that continued to enjoy enormous popularity in Umbria and Lazio, evident for example in such works as the panel of about 1515 at the Fitzwilliam Museum, Cambridge attributed to the artist’s studio.1 The name piece of this anonymous artist is a Madonna and Child in the Museo Diocesano in Orte, whose stylistic conformity is so close to the present work that both Gaudenz Freuler and Filippo Todini attributed it to the same master.2 Comparison between this and three other known panels by the Maestro della Madonna di Orte, active between around 1490 and 1520, and with the work of Perugino between the 1480s and 1490s, has led Freuler to date this to the last years of the century. The motif of the red prayer beads around the waist of the Christ Child are unique to this version and may be an indication of its function as a panel for private devotion destined for a domestic interior.