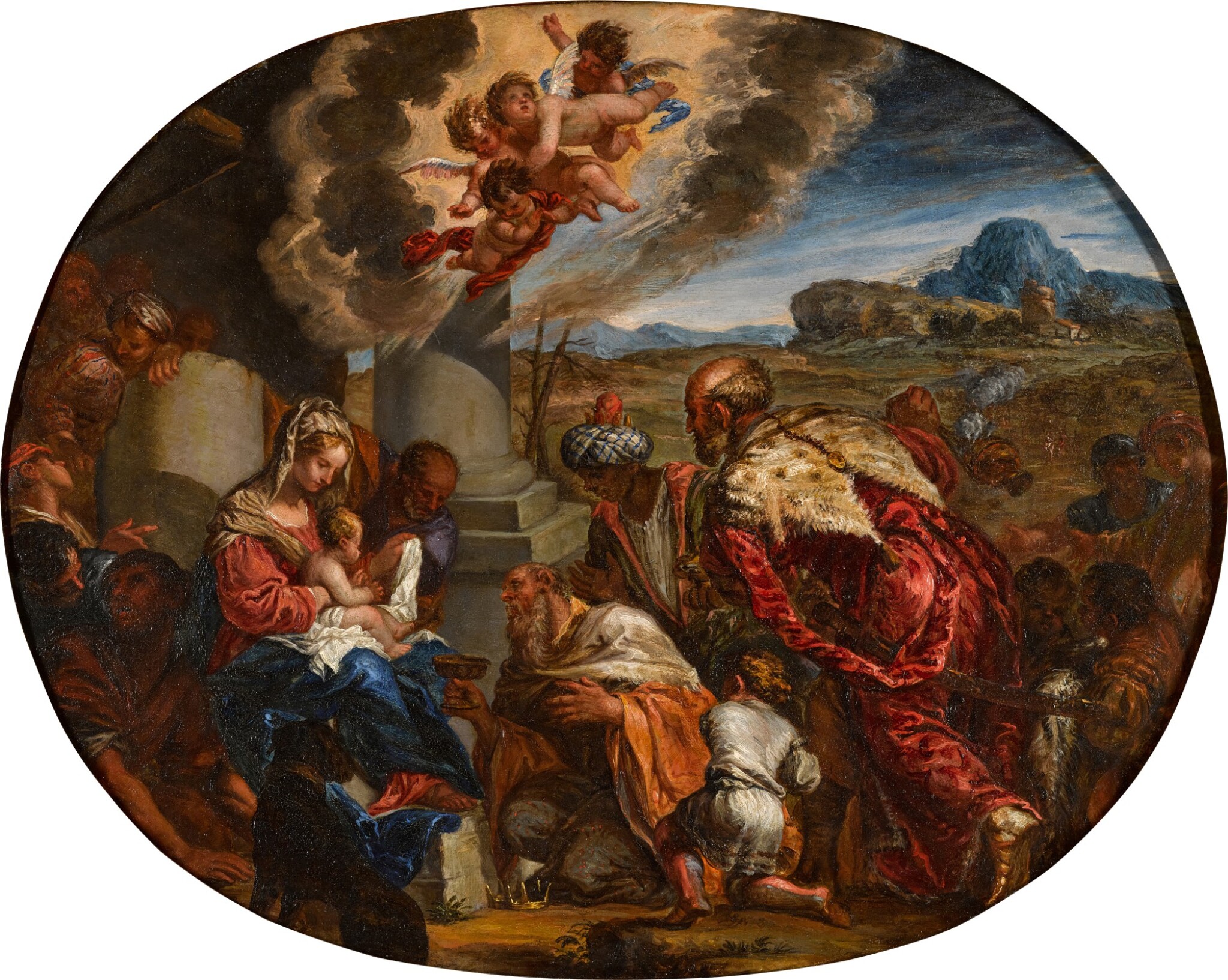 THE ADORATION OF THE MAGI

The copper plate is flat and stable, with a supportive stretcher applied to the reverse. The paint surface is clean and the varnish is clear and even. Inspection under ultraviolet light reveals small, scattered retouchings - most notably in the landscape upper light, in the clouds and putti, and in the background above the column centre left. Larger, more concentrated areas of retouching are found to an area in the centre of the upper margin approx. 3 x 4 cm., in the Madonna's shoulder 3 cm. long, and an area in the right-most magus' back. None of these distract from the legibility of the image which presents very well in its current state.

"There is a palpable fusion of influences in this painting; Cotta seems to stare hard at Veronese and Bassano in Venice, glance at Genoa, and nod gratefully to past visitors from Flanders: Rubens and Van Dyck. I find it distinctly north Italian in flavor."

Giacomo Cotta studied initially under Ciro Ferri, who worked in Bergamo during the first half of the seventeenth century and the Roman artist’s style and technique were to have a profound effect on the development of Cotta’s mature style. He later worked for a brief period in the studio of Federico Agnelli in Milan and Cotta married Agnelli’s daughter Margherita around 1649. His career continued to prosper in Milan and he even produced a series of paintings for Maria Anna of Austria. He spent the later part of his career in Bergamo and his most important commissions there were a Sacrifice of Abraham for the Church of the Capuchins and a Death of Saint Joseph for the church of San Giuseppe. After the death of his wife in 1670, he entered the priesthood. Now largely known for being the teacher of the flamboyant portrait painter Giuseppe Ghislandi (1655–1743), Cotta was an accomplished painter of canvases and frescoes and was also a prolific printmaker and engraved several of his own works.

A Rest on the Flight into Egypt in the Musée des Beaux-Arts, Caen (inv. M 139), an oil on copper roundel, dated to 1673, could perhaps indicate a similar date for our painting.