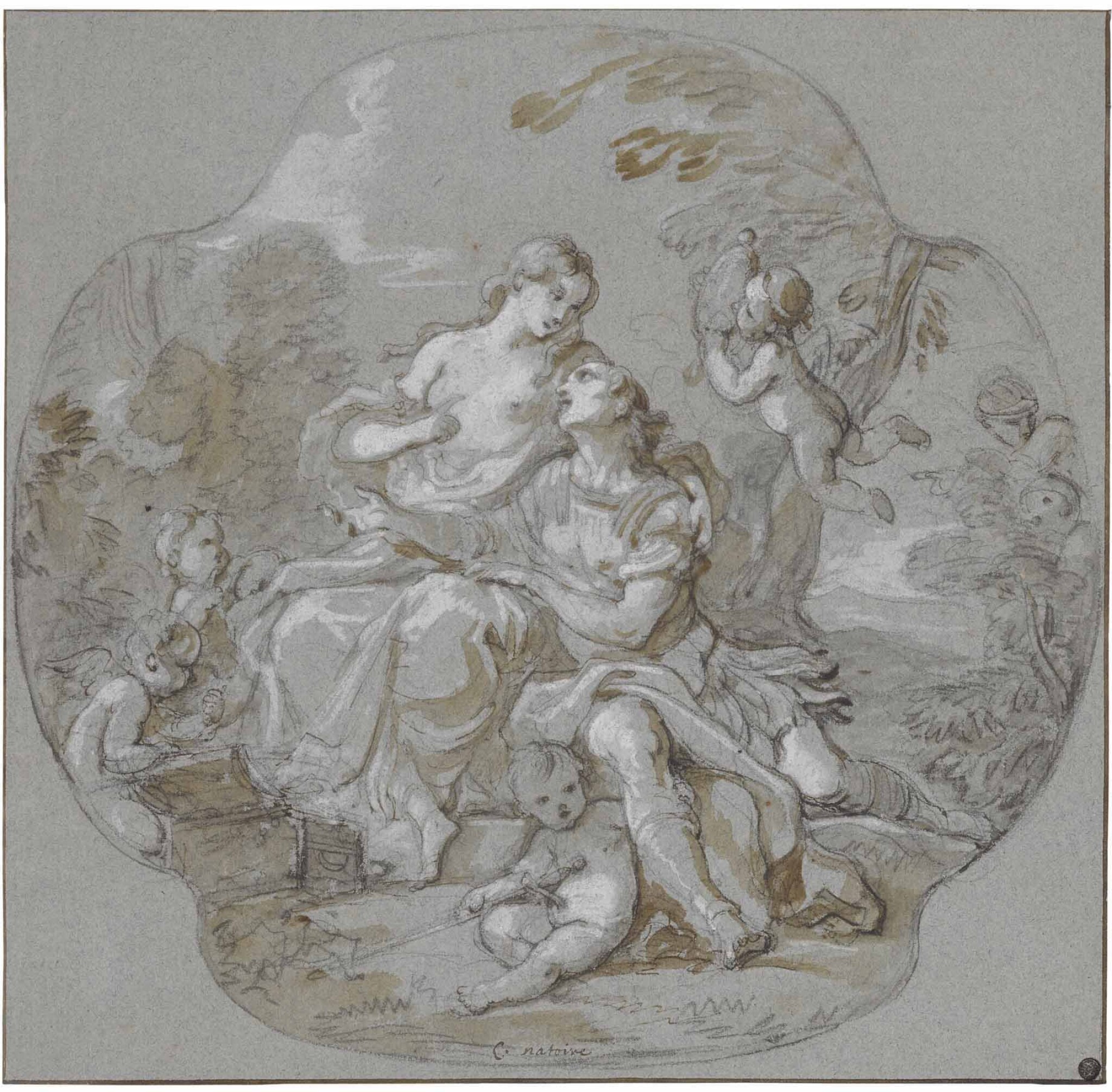 Pen and brown ink and wash over black chalk, heightened with white on blue paper;

Laid down to an old decorative mount which has in turn been hinged to a modern mount. The drawing remains in absolutely delightful and pristine condition throughout, with the combination of media fresh and vibrant. Sold in a giltwood frame.

This tender image of love, drawn in a wonderfully free and spirited manner and in an aesthetically pleasing combination of pen, wash and chalk, heightened with white, on vivid blue paper, depicts two celebrated literary characters, Rinaldo and Armida, from Torquato Tasso’s epic poem, Gerusalemme liberata (1581). This particular episode from Tasso’s poem, where the Christian knight Rinaldo encounters the pagan enchantress Armida, generated considerable interest among artists in the 18th Century and earlier, with Alastair Laing suggesting that its frequent appearances within French Rococo art may stem from the success of the opera Armide by Jean-Baptiste Lully, first produced in 1686 with subsequent performances throughout the eighteenth century.1

In her 2012 monograph on the artist, Susanna Caviglia-Brunel suggests that the Rohatyn sheet might be a preliminary design for a drawing of the same subject in the Louvre, Paris (D. 500).2 The Louvre drawing, which is more worked up than the present sheet, portrays the lovers in a more conventional setting, that is closer to the literary text. Here the protagonists reside before Armida’s palace which features as a concave architectural backdrop. The significant attributes belonging to the two figures are present; Rinaldo’s helmet and shield and Armida’s chain of flowers. The Louvre study and the present drawing form part of a group of five drawings that are all inspired by Tasso’s poem. Caviglia-Brunel points out that these are the only known works by Natoire that are associated with the famous text. Four of the drawings are drawn within very similar contoured framing lines and the present sheet within the shape of a quatrefoil.3 These stylized framing devices suggests that these works may belong to the same decorative series and may form part of the same pictorial commission, although no known paintings have survived.

Whilst the above theory of the decorative cycle is certainly convincing, there is no documented evidence for any such cycle being commissioned and Perrin Stein, in her entry for the present drawing, in the 1999 New York exhibition catalogue, suggests that this study may have instead been the pendant to another Natoire drawing, and formed a pair with Bacchus and Ariadne, also offered in the Lempereur sale in 1773, lot 574 (see Provenance). Stein dates the present sheet to the late 1740s or early 1750s.4

Madame Caviglia-Brunel discusses the difficulties in dating the Louvre drawing and the comparable drawings that form part of a possible series, as in general, Natoire’s decorative projects date from his return to Paris in 1730 and his return to Rome in 1751. However, one of the drawings in this so-called group bears a date of 1755, throwing this hypothesis into question. Sophie Raux, who dates this group to circa 1750-55, proffers the argument that Natoire may have received the commission whilst still in Paris but continued to work on the designs over many years.5

Susanna Caviglia-Brunel also notes that the two lovers, in the present sheet, can be found, in reverse, in an earlier drawing, possibly executed some ten years prior, by Natoire, entitled, Le Triomphe de L’Amour (D. 412). She also remarks that the composition of the present work is possibly inspired by a drawing, of the same subject, though in reverse, by Luca Giordano.6

The fascination and desire to portray a story of the power of love during times of conflict resonated throughout the Arts and Natoire ‘s vision is most appealing, not only in his own innovative elements but but also in his admiration of other artists, especially Domenichino and Boucher, whose versions of this narrative clearly had a great effect on him.7