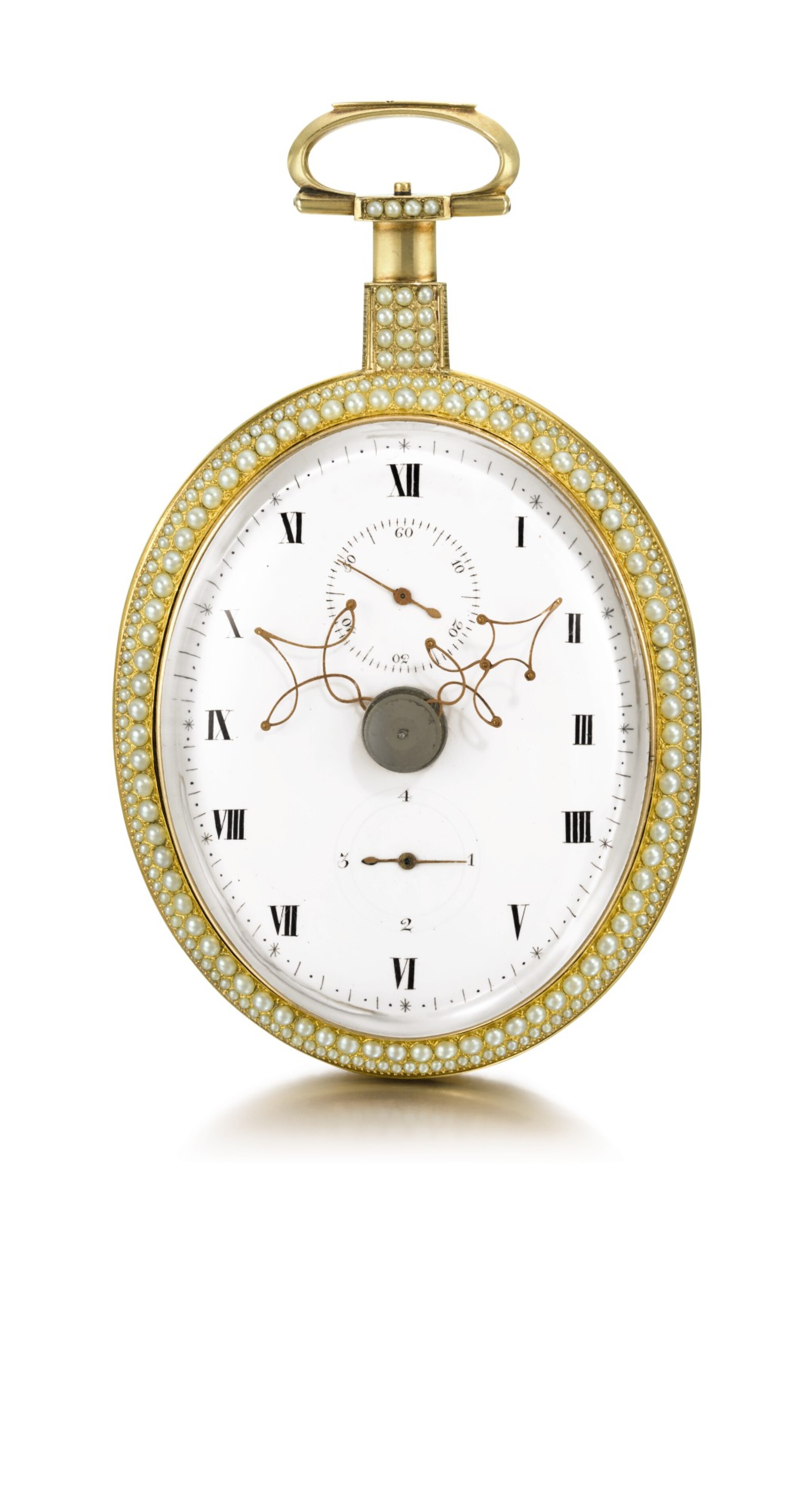 A MAGNIFICENT AND EXCEPTIONALLY RARE GOLD, ENAMEL, PEARL AND DIAMOND-SET EIGHT-DAY WATCH WITH EXPANDING HANDS AND FLYING QUARTER SECONDS FOR THE CHINESE MARKET

gilded eight-day duration movement, highly decorated with engraved scrolling foliage, flowers and a serpent, cylinder escapement, polished flat three-arm balance, large decoratively engraved hanging barrel, white enamel dial, Roman numerals, outer minute track with linear minute markers, star-form indications for the five-minute markers and dots at the half-minutes, subsidiary dials for seconds beneath 12 o'clock and flying quarter-seconds at 6 o'clock, the unusual gold hands expanding and contracting within the long and short axis of the dial, gold case, the back with translucent blue enamel over engine-turning, the bezels, pendant and bow with double rows of split pearls, the back with rose diamond-set motif within an oval frame of oval split pearls, case maker's mark PD for Peter Desvignes, gilt-metal hinged cuvette with two apertures with corresponding engraved illustrations of a horse pulling a rope indicating the direction of wind and a pair of watch hands beside the off-set handset square

Case: the case shows a small area of restoration to the outside band at 2 o clock . All diamonds and pearls are intact and present. Carat weight is **

There is a chip at 9 and a scratch on the subsidiary dial at 6.

Current private collection, purchased from the above auction

William Anthony specialized in opulent watches for the Chinese market and he is particularly well-known for his elaborate oval-form watches. Anthony's oval watches are usually found with their dials evenly divided into two with separate subsidiary dials showing hours/minutes above and seconds below. The present watch is an outstanding example of the rarest and most remarkable of Anthony's oval watches and is fitted with articulated hands which lengthen and shorten in order to evenly follow the oval chapter ring calibrated for hours and minutes at the dial's edge. An oval cam at the dial's centre causes the hands to expand and contract as they make their way around the dial, ensuring that the lengths of the hands remain in proportion to the differing distances between the dial's centre and its chapter ring, regardless of the time of day.

Like many decorative watches made for the Chinese market, Anthony's oval watches appear to have been made in pairs. Indeed, Anthony's watch no. 1705, sequentially that preceding the present watch, is identically styled save for the centre of the case back which is set with a ruby rather than a diamond as found on the present watch. It seems highly likely, therefore, that no. 1705 and the present watch, no. 1706, were produced as a pair. No. 1705 was at one time in the Belin collection, sold at Sotheby's London, 29 November 1979, lot 100; realizing the highest price of any watch in that auction, it sold for a hammer price of £72,000, a staggering sum at the time (the pre-sale estimate guide had been £20,000-30,000). No. 1705 was subsequently offered at Antiquorum Geneva, The Art of British Horology, 21 October 1995, lot 89. The present watch, no. 1706, was formerly in the collection of the Time Museum, Rockford, Il., and was included in Masterpieces from the Time Museum, Part 1, sold by Sotheby's New York on 2 December 1999, lot 28.

Another watch with expanding hands by Anthony, hallmarked for the year 1796, can be found in the collection of the L. A. Mayer Museum for Islamic Art in Jerusalem - it may also be the same watch as that from the Dunn Gardner Collection which was sold at Christie's London in 1902. The 1796 hallmarked watch is illustrated in: George Daniels & Ohannes Markarian, Watches and Clocks in the Sir David Salomons Collection, Sotheby Publications, London, 1980, pp.127-129, pls.74a-c.

William Anthony (1765-1844) is recorded as having worked at Red Lion Street and St. John’s Square in London. In 1815 he played an active part in the founding of the Watch and Clockmakers’ Benevolent Association. After this date, Anthony’s business appears to have deteriorated, in part due to his costly acquisition of Royal and other wardrobes from the time of King Charles I which he then exhibited at Somerset Gallery, but which was poorly attended, and also due to unsuccessful litigation with Grimaldi & Johnson. At his death he was found to have a substantial lease on the Doughty Estate which for some reason he had failed to collect rent from for the 20 preceding years – indeed, at the time of his death, the leases were almost expired, see: Britten, Old Clocks and Watches and their Markers, ACC edition, 1977, p. 422.