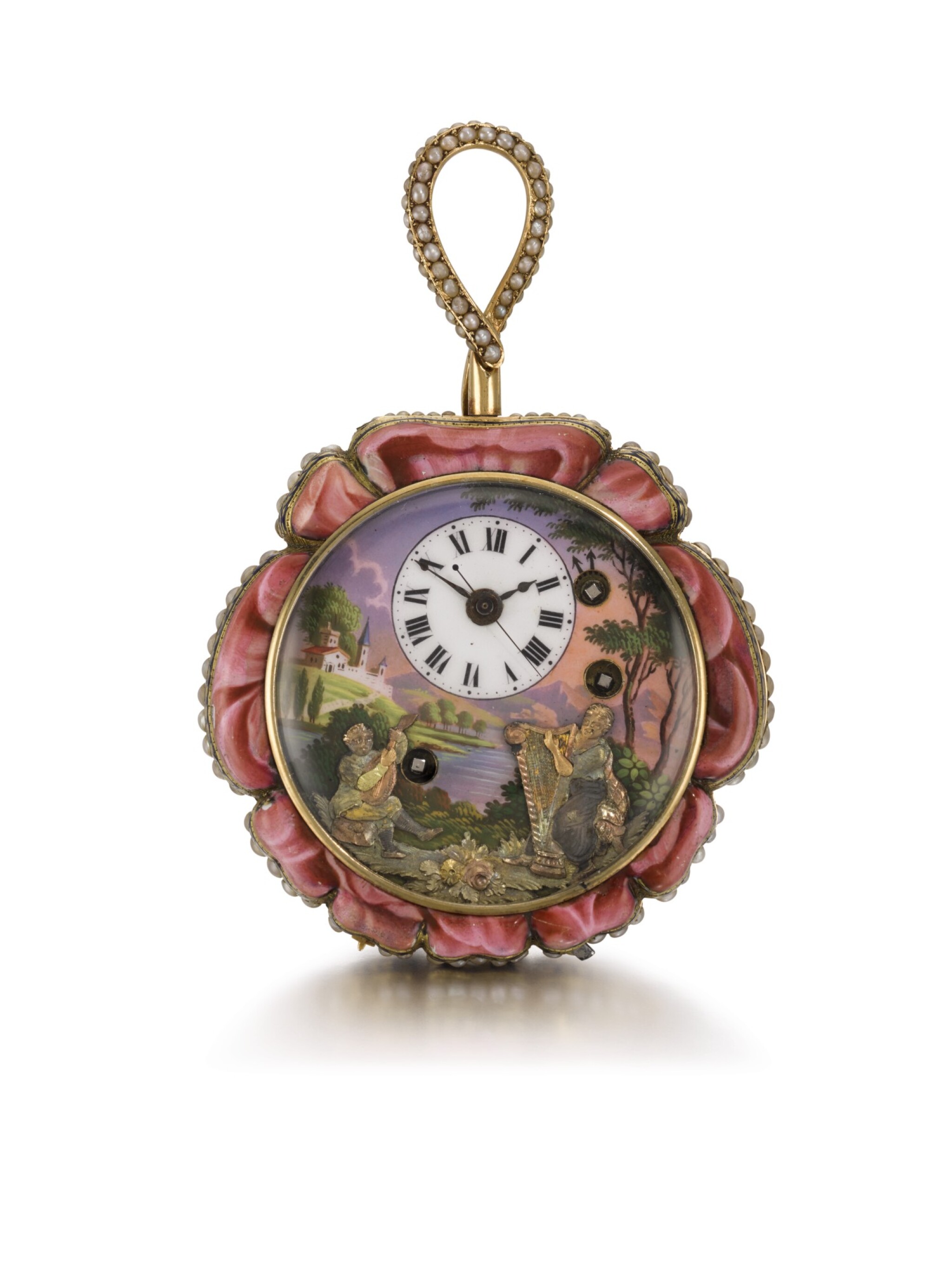 AN EXCEPTIONAL GOLD AND ENAMEL ROSE-FORM TWO-TRAIN MUSICAL AUTOMATON WATCH WITH CENTRE SECONDS, PLAYING ON THE HOUR AND ON REQUEST, MADE FOR THE CHINESE MARKET

gilded movement, cylinder escapement, hanging barrels for going and music trains, playing music on demand or on the hour via a pinned disc, 19 tuned teeth, movement stamped PM for Piguet Meylan and numbered 3568 to the top plate beneath the dial, small off-set white enamel time dial with black Roman numerals, outer minute ring, centre seconds, surrounded by a polychrome enamel painted lakeside scene, a vari-colour gold gentleman and a lady in the foreground playing a lute and a harp, their arms moving to strum their instruments, three apertures for winding going and music trains and for handset, dial plate numbered 3568 to the reverse, gold case, the back in the form of a pink rose flower, a rose bud and leaf, all seemingly emanating from a gold and pearl-set sepal and stem which also forms the watch's bow, the bezel similarly decorated in enamel, the band pearl-set and with gold geometric pattern heightened with dark blue enamel, lever beneath bezel for silence/musique, inside back numbered 3568

Movement: not running and music not playing at present.

Dial: appears to be in good condition

Case: chip to edge of case back to left of pendant, bezel has some discolouration in some areas probably indicating repairs, Back with possible signs of restoration. Band with restoration. Beneath the bezel is scratch marked what appears to be the name Melleret, Geneve

Piguet & Meylan are renowned for the magnificent watches that they produced for the Chinese market. Intricate decorative finishes played a key part in the creation of their pieces and the firm employed some of the finest enamel painters to embellish their watches. The present watch is typical of the firm's best work, combining sumptuous case decoration with innovative and complex mechanisms for the musical work and the automaton display. Examples of Piguet & Meylan's work can be found in many of the world's foremost collections, including the Patek Philippe Museum, Geneva, the Metropolitan Museum of Art, New York, and the Sandoz Collection.

The firm of Piguet & Meylan was formed in 1811 by Daniel Isaac Piguet (1775-1841) and Philippe-Samuel Meylan (1772-1845). It was a partnership that would last until 1828. Piguet was born at Chenit in the Vallée de Joux and he later settled in Geneva where he became a Burgher in 1812, one year after he had entered into partnership with Philippe Samuel Meylan to undertake the 'manufacture of watches, jewellery and mechanisms of all kinds' [see: E. Jaquet & A. Chapuis, Technique and History of the Swiss Watch, 1970 edition, p.149]. Piguet specialized in complex watches with carillons and clock watches. Meylan was born at Bas-du-Chenit and is credited with adapting 'tongues' of sonorous metal for the combs of musical movements suitable for watches and other small objects [see op.cit.]. Many advances in the creation of very small and extra thin movements for watches, musical boxes and automata of the most refined sort are credited to Piguet & Meylan, as well as the invention of the sur-plateau musical movement. The automata produced by the firm are considered to be among the finest ever made and include singing birds, barking dogs and even magicians who could 'answer' a series of questions (for an example of a Magician Box, see: Sotheby's New York, 8 June 2016, lot 81).