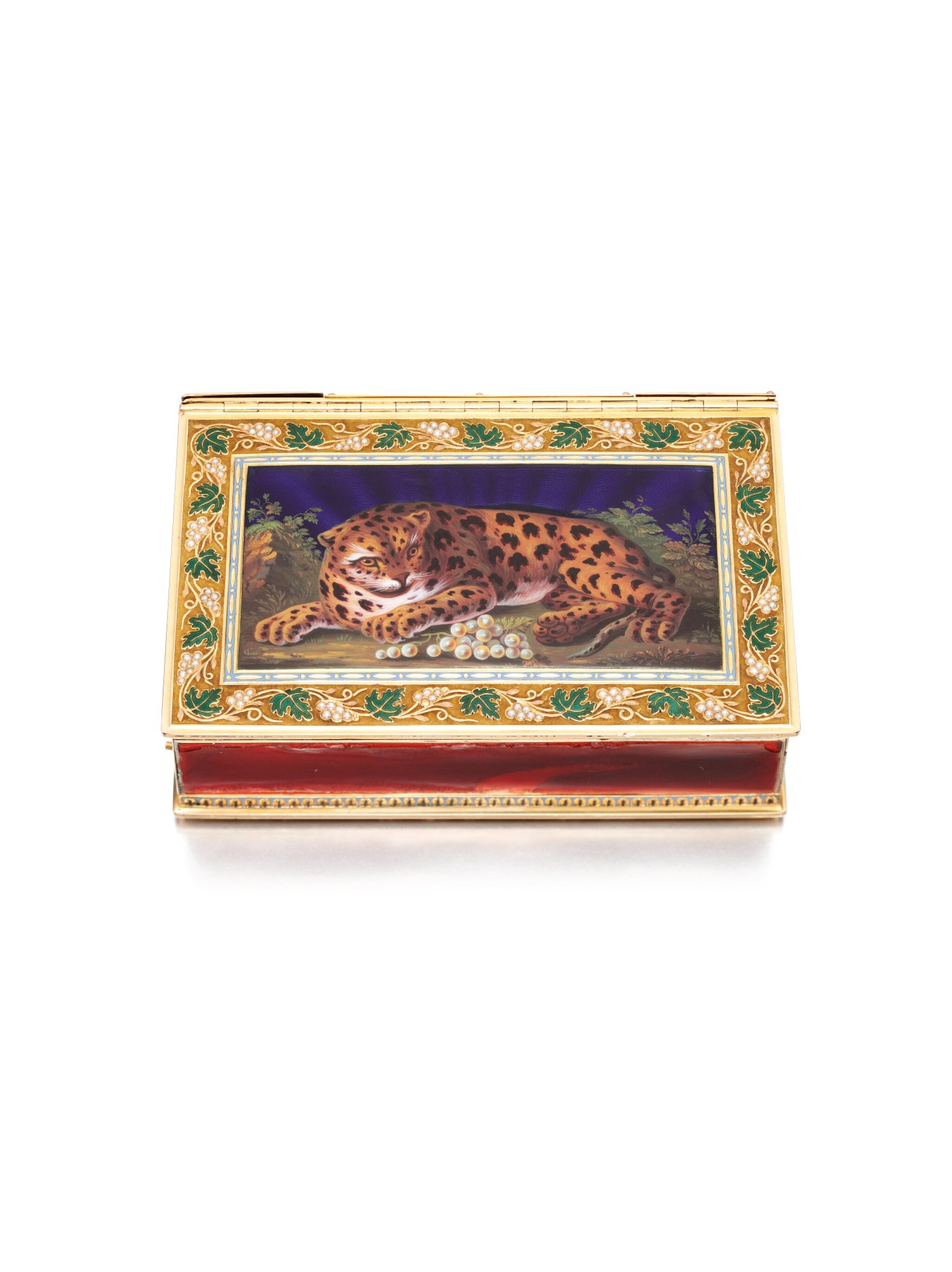 of rectangular book form, the front cover painted with a tensely-poised leopard contemplating a cluster of grapes within a chased and enamelled vine tendril border set with pearl grapes, opening to reveal a magical temple dedicated to Music and chased in four-colour golds over an enamelled ground painted with luxuriant trees and sprawling rose bushes: as the music plays the spiral glass columns and architrave scintillate with changing colours, the sun spins in the pediment and in the centre, double doors open to reveal an articulated dancer and musician perform before a 'gothick' backdrop that slides to reveal an inner sanctury with a flaming altar to Love, the spine of the book divided into four sections each framed by pearls and decorated with trophies of Gardening and Plenty, the top section concealing a watch with white enamelled outer ring and arabic numerals on a sablé ground, the two central sections opening together to form a key compartment, the bottom section enclosing a tiny vinaigrette with pierced grille, the three further sides enamelled in translucent scarlet, the back cover with a still life of fruits and flowers surrounding an antique urn, the case with maker's mark, the movement unsigned but the barrel signed 'fait par Puyroche à Genève’, with modern key

'Magician and Temple’ boxes, as they are known, are the most complex of the miniature automata produced in Switzerland in the early 19th century. They are justly prized for their ‘magic’ qualities, their beauty and their extreme rarity. Whereas singing bird boxes charm with their artifice, an improvement on nature, the magician and ‘temple’ boxes venture into an arcane world of soothsayers and necromancy.

The very small surviving group of so-called ‘temple’ boxes produced in Geneva between 1800 and 1810 includes automata of the utmost sophistication. At the present time only five are known to exist and still to perform their magic. Magic indeed since their existence springs from the series of ‘Magician’ boxes, created a few years earlier, by which the figure of a magician appears, waves his magic wand and summons up a small singing bird.

In an earlier, simpler pair of ‘Temple’ boxes, dating from around 1800, with movements by John Rich, a door opens to reveal a magician who causes the columns of the building to rotate and change colour.1 The later three, even more sophisticated, which date from 1805-1808, including the present example, have two changing articulated figures behind the magic temple doors, a dancer and a musician or priest, or two musicians, who perform while the columns in the colonnade turn and change colour as music plays and a star spins above and another door opens to a hidden sanctum where an altar flames.2

The present example and its ‘pair’, now in the Sandoz Collection, are unusually contained in cases formed as a book. The spine opens to provide three compartments, the top enclosing a small watch movement, the second empty to contain the keys to the movements, and the bottom with a ‘vinaigrette’ compartment, designed to contain a tiny sponge soaked in perfumed vinegar to revive a fainting lady or to protect her nose from unpleasant street odours.

The front cover shows a magnificent painting in enamel of a leopard and a bunch of grapes within a trailing vine border. It might seem somewhat counter-intuitive to have such a Dionysian beast and alcoholic symbols on an object intended for a lady but this is a beast of the Golden Age, when even leopards feasted on grapes rather than devouring their prey. The reverse with its plethora of fruits and flowers clustered near a Grecian urn, reinforces the Arcadian theme.

Although the symbolism on this magic book appears to be classically themed, it is probable that it was intended for the Chinese market. At this time, mechanical inventors, goldsmiths, painters in enamel and entrepreneurs in Geneva were all seeking to produce novelties to tempt the Emperor and his court. It was a risky business of speculation since there were many dangers on the long voyage as well as the financial problems involved. Still those involved felt the rewards outweighed the risks and we are lucky enough to enjoy the results.

Like the more famous Jean-George Rémond, Henry Neisser had come to Geneva as a young man in 1783. In 1798, he married Louise Debary and joined the bijouterie business of her sister’s husband, Philippe Sené, known as Sené & Detalla. Around 1805 Detalla left and the firm became known as Sené & Neisser, registering a maker’s mark S.N in a horizontal lozenge according to the new French regulations which came into force at the beginning of 1807. Sené died in November 1808 leaving Neisser to go into business on his own.

Jean Puyroche, later associated with his brother François, is recorded in the early years of the 19th century as an établisseur, the person who assembled a movement from parts supplied by individual artisans.