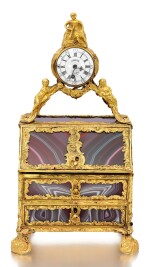 in the form of a bureau with sloping fall front and two front and one side drawers, the gold mounts enclosing the banded agate chased with scrolling foliage and flowers, surmounted by a gold-framed watch, the enamel dial signed Cabrier, London, the reverse with engraved signature C. Cabrier, London, the watch crowned by a musician with a flute and resting on two reclining figures, containing a plush-lined compartment fitted with three gold-capped glass scent bottles, a pair of parcel-gilt scissors, a foldable mirror, its gold cover chased with a landscape of ruins within scrollwork, ivory slips, a spoon, a tongue scraper, a thimble, a mother of pearl toothbrush and a gold-mounted mother of pearl brush, matching screw-on handle, and other implements, the bureau resting on scroll supports, the underside with serial number 764467

- Please note that the reverse of the watch is signed C. Cabrier, London, and that the serial number on the base is '764467'. - This lot contains ivory. Due to recent changes in the laws of many countries (e.g. US, France) Sotheby's recommends that buyers check with their own government regarding any importation requirements prior to placing a bid. Please note that Sotheby's will not assist buyers with CITES licence applications where a buyer elects to either collect or arrange their own shipping, nor will Sotheby's assist with the international movement of ivory by air, either as freight or through hand carry. Sotheby's shipping will only assist in shipping the lot to either domestic UK or EU destinations, where delivery is made by road transport. A buyer's inability to export or import these lots cannot justify a delay in payment or sale cancellation.

This gold-mounted hardstone necessaire is a beautiful example of the 'great variety of curious work in gold, silver, and other metals also in amber, pearl, tortoiseshell and curious stones’ advertised on the trade cards of the famous goldsmith James Cox (illustrated in Roger Smith, ‘James Cox (c. 1723-1800): A Revised Biography, Burlington Magazine, vol. 142, June 2000, p. 353).

Born in London in about 1723, James Cox was the leading eighteenth-century retailer of jewelled automata and similar precious and intriguing ‘toys’. At the age of fifteen, Cox was apprenticed to Humphry Pugh of Fleet Street, a silver spinner in business as a toyman, which might explain why Cox’s skills as a craftsman and goldsmith remained secondary to his inventiveness and his marketing abilities throughout his life. His career was tumultuous. Having set up his own workshop in Racquet Court, Fleet Street in 1745, immediately after his apprenticeship, he remained there until 1756. After an inauspicious start followed by his first bankruptcy, he began anew on a grander scale, focusing his attention on exporting his increasingly fanciful musical objects and complicated automata to China, India, Persia and the Ottoman Empire, where they were called ‘sing-songs’. From 1766 to 1772, he exported an incredible £750,000 worth of objects. When the risky Far Eastern market ceased to prosper, the goldsmith and marketing genius opened a ‘museum’ in Spring Gardens, London, which was essentially a showroom for his wares which were famously dispersed by lottery in 1775.

As explained in his own Descriptive Catalogue of the Several; Superb and Magnificent Pieces of Mechanism and Jewellery, exhibited in the Museum, at Spring-Gardens, Charing Cross, London (1772), Cox was proud to have ‘found means to make the labour and industry of so a great number of the most ingenious artists concur to its perfection. The Painter, the Goldsmith, the Jeweller, the Watchmaker; in short, almost all the liberal arts have found employ in it: and all have worthily co-operated thereto, (…), lending splendor to each other’. Although the necessaire in the present lot does not contain a musical movement, the work of a lapidary, a goldsmith or gold chaser, and a clockmaker have indeed been combined. The degree to which these craftmen cooperated, or whether these extraordinary objects were wholly the product of Cox’s vivid imagination and brilliant marketing strategy remains subject to speculation, but the effect that they created was undeniable. Intended to surprise and delight the viewer, the luxury toys exhibited in Cox’s museum in Spring Gardens certainly did not fail to do so during a visit described in Fanny Burney’s sentimental novel Evelina; or, The History of a Young Lady's Entrance into the World (London, 1778, letter XIX): ‘This Museum is very astonishing, and very superb; yet it afforded me but little pleasure, for it is a mere show, though a wonderful one’. Evelina’s grandmother, however, is less critical, and is completely enchanted by the visual sensations of Cox’s automated objects, such as a pineapple opening to reveal a nest of singing birds, commenting: ‘I’m sure if you don’t like this you like nothing; for it’s the grandest, prettiest, finest sight that ever I see in England’.

Nonetheless, his reputation and the short but intense craze for his objects in the Far Eastern market did not save James Cox from a second bankruptcy in 1778. Although the proceeds from the sale of the lottery tickets in 1775 had allowed him to repay most of his debts, and despite significant sales to Catherine the Great during the same period, Cox’s exports were hindered by the American revolution and France’s entry into the conflict in 1778. Little is known about Cox’s final years, but to this day his name remains attached to the most extravagant automata, clocks, spy glasses, necessaires and gold boxes produced in London at this time, for example the gold-mounted automaton snuff box in the Gilbert Collection in London (inv. 384-2008), which is an equally successful combination of gold and agate as the present lot. An even more elaborate gold and hardstone necessaire in the same manner by Cox, signed and dated 1756, was sold from the Palace Collections of Egypt, Sotheby’s Cairo, 13 March 1954, lot 617. The nearest comparable example, however, to the present necessaire, in terms of construction, design, proportions and quality, also set with a watch by Cabrier, was included in the prestigious sale of the collections of Baron de Redé and Baron Guy de Rothschild at Sotheby Parke Bernet, Monaco, 26 May 1975, lot 28.