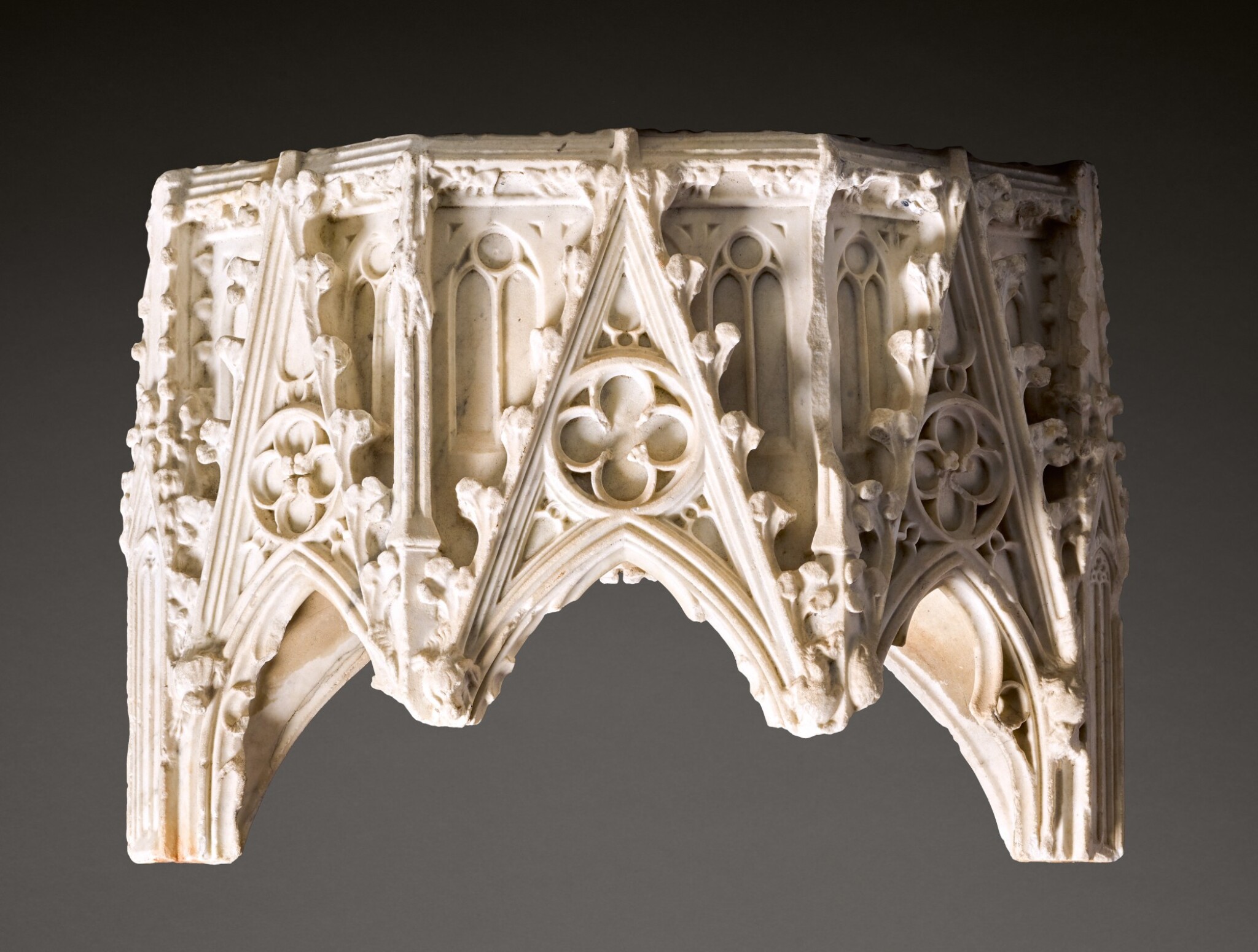 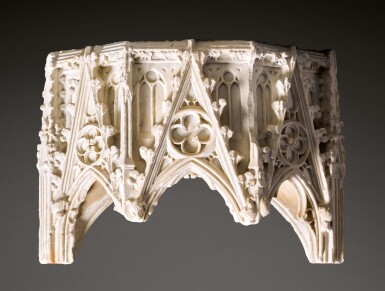 Canopy from a Tomb

To request a condition report for this lot, please contact sculpture@sothebys.com

Private collecton of an interior designer, Nice, France, until 2016

This beautiful Gothic canopy with tracery would originally have surmounted the tomb of a high ranking member of the French 14th-century elite, possibly even a member of the royal family. The use of marble, together with the fact that the outer vertical finials are constructed to sit on colonnettes, confirms that the present canopy formed part of a prestigious tomb monument. Stylistically it accords strongly with the work of the sculptor to the French and English courts Jean de Liège (Jean Hennequin), who was responsible for the tomb Philippa of Hainault, wife of Edward III, at Westminster Abbey, and is credited with completing the tomb of Charles V and Jeanne de Bourbon for the Basilica of Saint Denis. The present arcade compares closely stylistically and in the quality of carving with both the canopy from the Westminster tomb as well as the surviving architectonic fragments of the tomb of Charles V, which are conserved in the musée du Louvre (inv. nos. RF1241D; RF2009-4; INV12260F; INV12260F; INV12260F). Compare the trefoil crocketed gable in one of the Charles V fragments (inv. no. RF1241D) to the quatrefoil gable in the present canopy. The blind windows find a strong comparison in another fragment from the Charles V tomb with a bishop (inv. no. INV12260F). A drawing of the tomb by François Roger de Gaignières (circa 1700) shows that the canopies which originally accompanied these elements were near exactly of the form of the present marble, with three gabled sides inset with blind quatrefoil tracery (Gagnières's drawing of the Tomb of Charles V and Jeanne de Bourbonis held in the Bibliothèque national de France, inv. no. BN/CC BY-SA 3.0).

Compare also with the drawing of the double tomb of Marie and Blanche de France fromerly at Orléans with similar canopies (repr. Les fastes du gothique, op. cit., p. 134). The presence of grotesque creatures at the foot of each gable may indicate, however, that the present marble dates to earlier in the 14th century, since such beasts are found, for example, on elements of tracery from the early 14th-century tomb of Louis X le Hutin and his son Jean I le Postume also today in the Louvre (inv. nos. RF1241a; RF1241b; RF1241c; RF4484). Traces of lead sealing on the upper surface of the present canopy indicate that it was surmounted by an epitaph, as was the custom for the most important tombs.