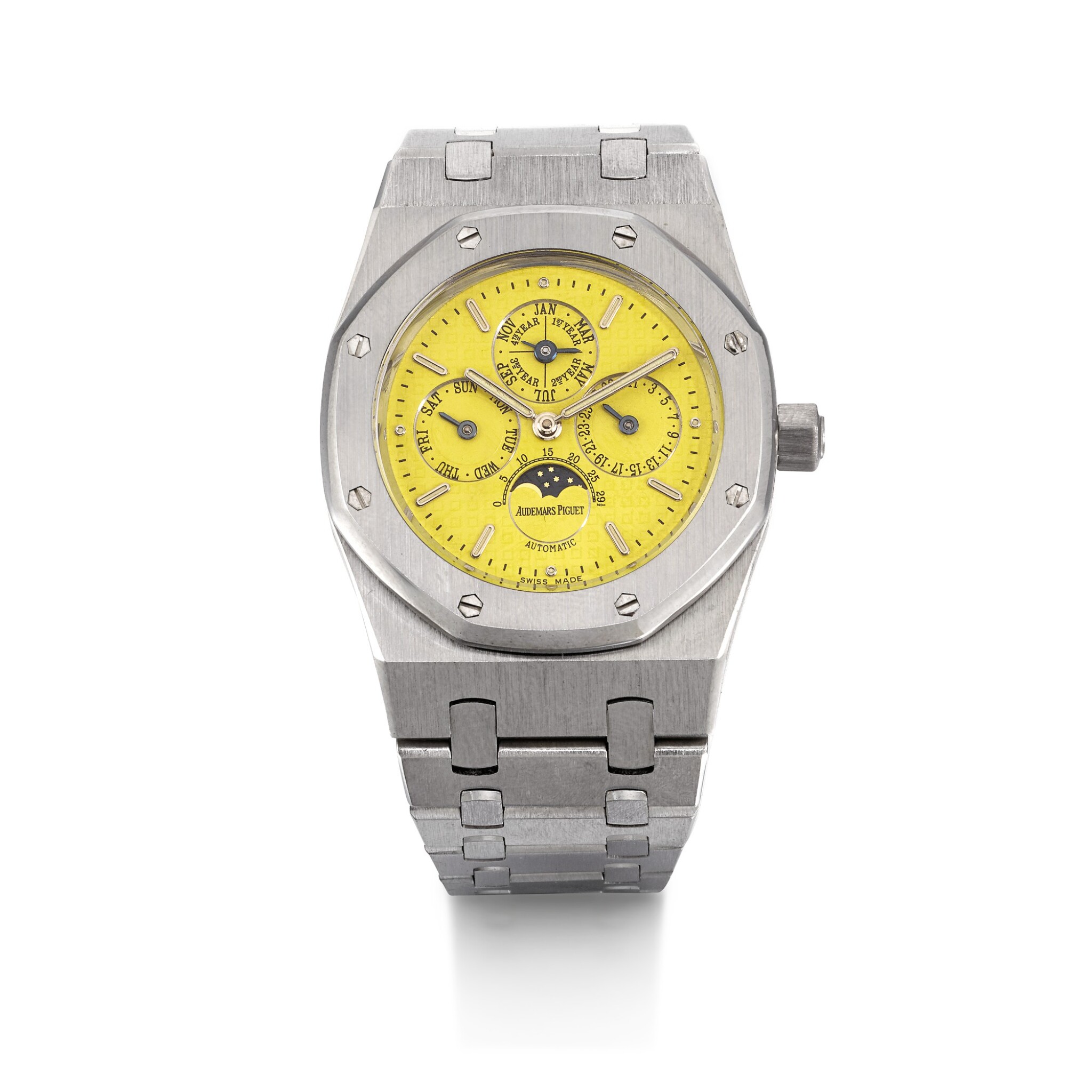 MVT: running and calendar functioning at the time of cataloging.

Audemars Piguet is recognized as one of the most important Manufactures in the world. Created in 1881 and located in Le Brassus, Audemars Piguet is synonym of complicated watches, especially minute repeaters and perpetual calendars, often housed in groundbreaking design cases. The brand perfectly exemplifies the famous sentence of French couturier Christian Dior: “Respect tradition and dare insolence: you cannot have one without the other.”

This is exactly what led the brand to create the Royal Oak, that was first presented to the public in 1972. Many legends surround that model designed by Gerald Genta (1931-2011). Amid the quartz crisis, the management of Audemars Piguet realized the interest of a luxury steel watch from the Italian market. They decided to entrust the perilous mission of designing it to Gerald Genta who already had an established reputation as a watch designer after creating some models including ones for Universal Genève and Omega. The first luxury sport watch he designed can be considered as his masterpiece. The shape of the case is inspired by a diver’s helmet. Interestingly, the name Royal Oak comes from a series of 8 vessels of the British Navy, hence the 8 sections of the bezel, who themselves refer to the oak tree located in Boscobel wood, Shropshire, which is where the future Charles II hid during the English civil war after the Battle of Worcester in 1651.

While the Royal Oak played a key role to re-establish and develop Audemars Piguet, it was a complication that also saved the Maison from the quartz crisis: the perpetual calendar.

In 1978, they launched the reference 5548. Thanks to its classic size and balanced dial, the watch immediately met a large success. It was the only alternative to the Patek Philippe 3448 for someone who wanted a high-end Swiss perpetual calendar timepiece. The Audemars Piguet perpetual calendars have this instantly recognizable cross-like 4 subsidiary dials design, faithful to the earlier pieces. While other brands used widows to display indications such as the day or the month, AP has kept this layout both in its classic or sport perpetual calendar watches such as the Royal Oak.

The perpetual calendar is one of the signature complications of Audemars Piguet. Jules Louis Audemars himself chose this complication for his school watch (also equipped with quarter repeating and dead beat second mechanisms) that he completed before 1875 and kept improving for the following 20 years. AP produced some of the finest perpetual pocket watches and wristwatches, with the reference 5516 for example. Before the late 1970’s, these wristwatches were produced in very low numbers by a handful of Swiss Manufactures only. With the 5548, Audemars Piguet led the way, before Patek Philippe, Vacheron Constantin or Blancpain to a wider production of these complicated pieces.

There is no surprise that AP decided to equip their spearhead model with this complication. The Royal Oak was first introduced with a perpetual calendar under the reference 5554 (later renamed 25554) in 1983 and made available the following year.

Based on the caliber, the Audemars Piguet Royal Oak Perpetual Calendars can be divided into 5 categories:

- Perpetual calendar with leap year and weeks indications: Caliber 5134 based on the 2120

- Perpetual calendar ultra-thin with leap year indication: Caliber 5133 based on the 2120

While four of the five categories are related to the calibre 2120 and can be found in multiple references, the 2141/2806 was only used for one Royal Oak reference: the 25800. The reference stands out not only by its movement, but also by its size. Developed as an alternative to the standard models, this piece redefined the aesthetic of the iconic design. Its proportions offer a very special and unique presence. On the wrist, it looks and feels bigger than just the official 33mm.

The Reference 25800 was introduced in 1996, the year of manufacturing of the present lot. The confidential production was kept very low and the model was available during a few years only. After staying in the shadow of the normal size models, the 25800 is nowadays highly sought after by discerning collectors who have understood its importance.

The 25800 was also the first Royal Oak perpetual calendar to be produced in white gold (with the exception of an example of the 25654), such as the present example. Nonetheless, the reference was mainly available in yellow gold and steel.

The year 1996 was a bright year for Audemars Piguet, who introduced a series of Royal Oak Offshore with colourful dials on matching leather straps. Simultaneously, the Manufacture produced a few dials using some of these bright colours for the classic Royal Oak, including the 14790 and the 25800. Nonetheless, extensive research demonstrates that no other white gold 25800 with a similar dial has been presented on the international market, making it possibly unique.

Bright colour dials are exceptional in the watch world where someone looking for something different has to consider himself lucky with a salmon or a blue dial. Experience proves that brands who ventured producing more daring colour dials were right and created pieces of a timeless beauty. The aforementioned success of the Royal Oak Offshore, as well as the Rolex Stella or the new Oyster Perpetual launched a few weeks ago, demonstrates it perfectly. Nonetheless, this present lot sets itself apart by being a perpetual calendar an the only Royal Oak in precious metal that has appeared with such an incredible dial.

Finding a 25800 is a long quest for an Audemars Piguet enthusiast, finding it in white gold is even more exceptional and finding the only publicly known example with a bright yellow dial is a dream come true.

Sotheby’s is extremely pleased to present this exceptional piece to the international market.