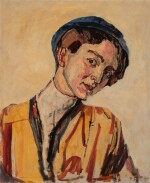 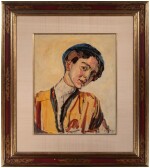 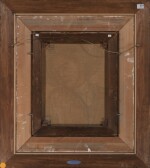 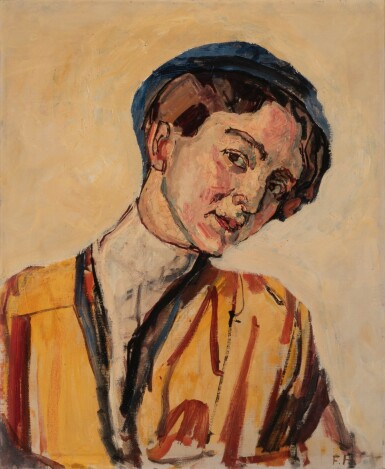 The unlined canvas is perfectly flat. There is a small square patch repair to the canvas in the lower right-hand corner which is only visible from the reverse. The paint surface is exceptionally well preserved with all the original impasto intact. The painting is dirty and the surface yellowed. It would greatly benefit from a light cleaning. Inspection under ultra-violet light shows no retouching to the figure and only a few minimal retouches along the bottom edge of the canvas and strengthening of the signature initials. The linen passe-partout of the frame is slack in areas, but otherwise the modern frame is in good condition.

Galerie Wolfgang Ketterer, Munich, 30th May 1995, lot 11, where acquired by the present owner.

Hodler’s female portraits are celebrated as some of the most influential works of the genre in the early 20th century. Moving away from traditional compositions, Hodler experimented freely with a bold expressive style and colours, painting some of his most powerful works, of which this female portrait, executed circa 1914, is a prime example.

The young woman portrayed here has not yet been unidentified, but an early expertise by Carl Albert Loosli, dating to April 1937, noted that the portrait was a private commission interrupted because of health reasons of the sitter (see online entry SIK-ISEA 86488).

The position of the figure, against a plain background, devoid of any ornament, reminds us of other iconic portraits by the artist, such as those of Valentine Gode-Darel or Emma Schmidt-Müller. The figure tilts her head to the right, looking upwards slightly. The tension of this pose and the understanding, slightly questioning, gaze of the young woman are central to the portrait’s effect. Her long neck is emphasized by the elegant high collar of her white blouse and the warm skin tones and orange of her jacket contrast with the ivory background. The blue forms of her hat and the folds of the jacket are broadly blocked in.

In a style reminiscent of the Fauves, Hodler applies the paint in thick, broad brushstrokes of vivid pigment; see, for example, the green and pink dashes of paint in her face and neck. The dark, nervous, sinuous outlines of the figure are a hallmark of Hodler’s bold portrait style and give a vivid sense of movement to the composition. These bold outlines, together with the unconventional pose, remind us of Egon Schiele’s portraits from the same period. The two artists came into contact in 1904 when Hodler was invited to exhibit 31 works in 1904 at the Vienna Secession alongside the foremost Austrian painters.

This work is registered in the Swiss Institute for Art Research (SIK-ISEA) under no. 86488.