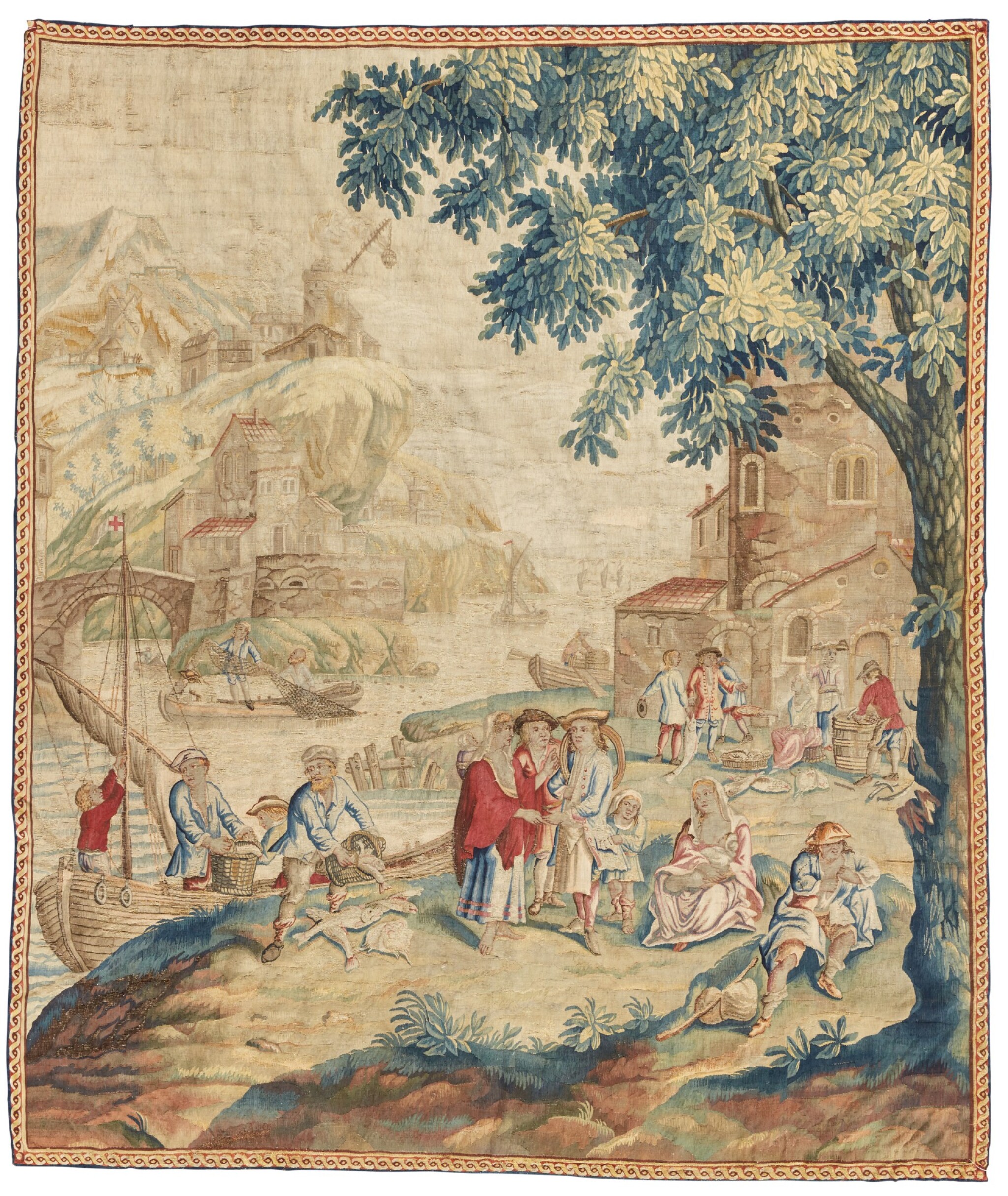 the foreground woven with a grassy quay-side flanked by a tree with a seated male figure resting under the shade of the foliage, with his belongings rolled up, tied to a stick and placed on the ground beside him, a seated mother holding a baby sit close to him, and three standing figures and a child stand in discussion in the centre, figures behind are washing, weighing and buying the fresh catch, and all are in front of a fortified building, a fishing boat has baskets of fish being unloaded to a figure on the shoreline as the sail is taken down, the mast bearing a small St George pendant, and a small boat is putting out nets in the distance, and further boats are seen in the bay beyond the promontories, one of which has a bridge, with woodland and a perched windmill and high upon a rocky outcrop a lighthouse with smoke eminating from the hanging metal basket, all within a narrow four-sided gold and red scrolling ribbon border

Overall measurements: 219cm across the top, 223cm across the bottom, 259cm along the left side, 264cm along the right side. Overall good condition. Good size. Lovely subject. Beautiful details, including weaving of foliage in bottom right hand corner. Some repairs to sky, faces (hair and beards), and to some of areas of light silk highlights, for example in clothing and sky. There is some discolouration to sky, especially in top left corner. Lined and with old Velcro attached across the top. Navy blue original outer edging to selvedges.

Turvey Abbey, Bedfordshire, one of a set of three, purchased in 1920's from Sussex Estate

(There were two others in the series, 'The Hayfield' (267 by 457cm), was presented by the Corporation of London to the Royal Collection as a Wedding present to Prince of Wales in 1981; the weaving 'Merrymaking at the Swan Inn' (262 by 315cm), is in a Private Collection, USA).

Generally known as `Teniers' Tapestries, and of great appeal, the extensive series were inspired by the paintings of David II Teniers (1610-1690) and depict everyday scenes of country life and commercial activities. They were immensely popular commissions from the late and seventeenth century through to the middle of the eighteenth century. See G. Delmarcel, Flemish Tapestries, London, 1999, pp.352-361, for a comprehensive discussion of the `Teniers' Tapestries and M. Klinge, Exhibition Catalogue, David Teniers the Younger, Paintings and Drawings, Antwerp, 1991, no.62. Few of the so called `Teniers' tapestries correspond so exactly to a known original. The `Teniers' tapestries were woven by predominantly Brussels weavers, and in addition by workshops in Lille, Oudenaarde, Beauvais and Madrid. The English `Teniers' Tapestries were inspired by the designs used by the Brussels weavers of Jeroen Le Clerc (d.1722) and Jacob Van der Borght (noted in 1677 and recorded as having eight looms between 1703-1707), both of which were responsible for the earliest weavings of the Teniers tapestries.

English tapestries of the eighteenth century are commonly known by the generic title of Soho tapestries, which reflects the fact that the most prominent makers lived and worked in Soho, or in areas adjacent to it. The history of tapestry weaving in this period is, however, obscure, and it is difficult to distinguish the products of the different workshops, because so many of the works are unsigned. During the eighteenth century the taste for tapestries gradually declined, but in the first half of the century most great houses still had pictorial hangings in at least one of their principal rooms. Although the majority of these tapestries were imported from Flanders and France, English manufacture was still fairly active, and by no means negligible in quality. The Soho weaving community came from an established tradition of tapestry weavers in London, and most of them do not have sufficient records to show what they worked on, due to the nature of the industry. The Chabaneix workshop is proposed for the set from which this panel is part. Leonard or John?, were of Huguenot descent, and independent Soho weavers, based in a workshop in Arlington Street, along with James Bridges, which was later occupied by the equally lesser known independent weaver, Michael Mazarind.

In the late 17th century, the Protestant Huguenots came from France, bringing their skills in weaving (silk and wool), in order to escape religious persecution under King Louis XIV of France. Calling their journey Le Refuge, up to 700,000 French came to England between 1685 and 1688. Many of the French weavers settled in London, and whilst there were some around Soho, including the weaver Parisot, the East End became the home to the majority of the Huguenot migrants in this time. Bethnal Green, Spitalfields, Whitechapel and Shoreditch all became popular weaving areas, partially due to the immigration of the Huguenot weavers. Weavers would aim to work outside the walls of the City of London in order to avoid levies issued by the Guilds. English tapestries, woven in the late 17th century and by the 18th century English workshops of John Vanderbank, Francis and Thomas Poyntz and Peter Parisot, are discussed in H. C. Marillier, Handbook to the Teniers Tapestries, London, 1932, pp.101-110. Francis Poyntz was yeoman Arrasworker at the Great Wardrobe from 1660 to his death in 1685. He was one of the last technical directors of the Mortlake Factory. As manager of the Great Wardrobe he moved the weavers from Blackfriars into premises in Hatton Garden in 1679 and on his death in 1685, his son Thomas Poyntz continued the workshop at Hatton Garden until the early 18th century, and with or without the weaver's or workshop marks the designs were used. Other Soho tapestry makers followed, such as Joshua Morris, John Elly and Richard Chillingworth, followed by William Bradshaw, Paul Saunders and George Smith Bradshaw, the later three being primarily upholsterers or cabinet-makers, but who also regarded the supply of tapestries as part of their trade. They employed skilled weavers to make the tapestries, but used their own judgement (or perhaps that of their clients) in selecting the artists to design the tapestries. George Smith Bradshaw was the last of the Soho tapestry makers. The Great Wardrobe was abolished in 1782, and by the end of the century the English tradition of tapestry weaving came to an end. The newer, lighter styles of decoration which made rapid progress after 1760 were unfavourable to pictorial hangings, and the rare English commissions for tapestries in the later eighteenth century were executed by the French Gobelins weavers.

The tapestry offered here of the `Fish Quay' scene is inspired by the Le Clerc and Van der Borght weaving of the late 17th century, showing the small boats near the quay, and similar groupings of figures and fortified buildings on the land in the distance and on the quay-side, only the sea is not depicted across the foreground as is the case in most of the Brussels weavings of the subject. The Fish Quay design is illustrated in Marillier, op.cit, pl.8., and pl. 69a, illustrates an English weaving, in reverse, woven by the Soho workshop of Vanderbank, which is a wider composition and includes similar groupings to the Brussels composition. Vanderbank weavings had simple bead-and-reel borders and laurel stem borders, and the compositions incorporated flying birds. The Poyntz ‘Teniers’ inspired tapestries depict fishing scenes and pursuits specifically linked to the months and seasons. The present panel shows influences from both these interpretations.